As I mentioned when I first posted about this earlier, I predicted he'd either ignore the news about Gretchen Whitmer completely, or find a way to hail these domestic terrorists as heroes, or at least sound supportive of them.

He stopped just short of the latter, in a series of 3 tweets tonight.
The series of erratic tweets seemed all over the place, swinging wildly from one extreme to the other, contradicting himself.

One minute, he tried to credit himself personally with thwarting the domestic terrorist plot, demanding a thank you - though it was the FBI, whom he referred to as his FBI.
(Funny - he didn't feel that way about the FBI just a year or so ago, they were part of the swamp - but I'm pretty sure most of the same people are still there.)

The next minute, he says he's a president for all against violence, even those who oppose him - but does not directly condemn the militia group that plotted against her - and in the same tweet, he blamed Democrats for violence. 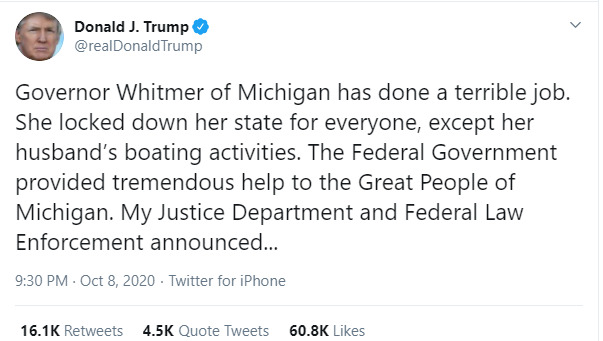 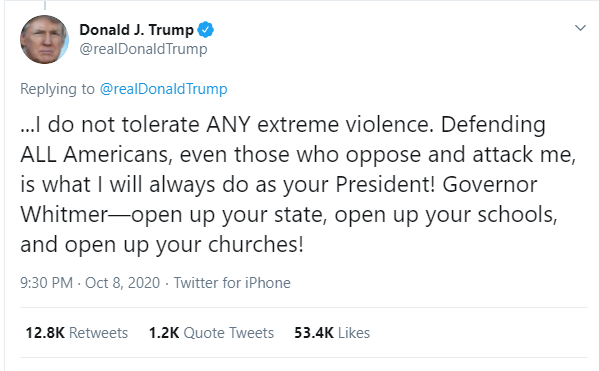 Remember  -   Biden, Harris, Whitmer, and most Democrats did the right thing, when it was announced Trump had COVID - they pulled any negative ads about Trump, withheld any criticism of President Trump,  and publicly wished him well and sent their prayers.

Trump, on the other hand,  cannot find the basic human decency within himself to give Gretchen even one day to recover from the news that she was a target of a kidnapping/kill plot by domestic terrorists, before he attacks her and blames her and other Democrats for the violence?

And if you watched her press conference today (video below), you already know that she did NOT call him a white supremacist, as he said, in these tweets.
Also, she never said his name - just "head of state."

She simply spoke truth - that he was asked repeatedly to condemn White Supremacy and groups like these, during the debate, but he did not - as well as he refused to agree to a peaceful transition of power - and in fact, told them to "stand back and stand by."
I'm sorry he doesn't want to admit it - but that is exactly what he said and did, at the debate.

Further, she said that when he appears to comfort militia groups like these, and tells them to "stand back and stand by," it legitimizes them - and they "don't hear any rebuke in his words - they hear a rallying cry."

Thus, she said, the "head of state" and others repeating his rhetoric are "complicit" in the actions by domestic terrorists like these.

Otherwise, she actually spent most of her message calling for unity, during these frustrating pandemics, and to "not fight each other, we're not enemies  - fight the virus.  The virus is the enemy"

Thus, essentially, all Trump  accomplished with these tweets is prove Gretchen Whitmer right - that his rhetoric and propaganda,  demonizing and spreading dysinformation about Democrats - is complicit in her being targeted by a terrorist militia group.

Allllll righty, then - with that, I think I'm at my quota for witnessing mental illness on public display, including that of his brainwashed cult followers - who have just proven they have lost all sense of morality and basic human decency, in their comments under these articles.
It appears, from their comments, they think domestic terrorist plots to kidnap and kill a U.S. Governor are justified, and that she brought them on herself?!?

Mind you, the same people cheering on a domestic terrorist militia group targeting a U.S. Governor to kidnap and kill, are the same people who thought it was "not enough" that Democrats pulled any negative ads about Trump, and sent well wishes and prayers to/for Trump with COVID and "horrible" that Democrats didn't express more empathy for the President of the United States.
Trumpers - I'm sorry you don't realize this - but Trump just proved he is a morally depraved, very sick man, and I don't mean physically  - and so are you, if you can't see it.
Cheering on a domestic terrorist group targeting a U.S. Governor to kidnap and kill?
A POTUS that doesn't even wait a day afterwards, to blame Democrats for violence, essentially blaming Gretchen for bringing this sort of domestic terrorism on herself in the same tweet?
Which, of course, only further proves Gretchen right, when she said the domestic terrorists - and those supporting them -  are "depraved."

Thus, with that, I think I'll unplug from all this crazy for the weekend - take care, all :)

PS - Here's a question for you - why Governor Whitmer, when Governor Cuomo of New York, and Governor Newsome of California, had even worse and longer lockdowns, restrictions and mask mandates Gretchen Whitmer ever even thought about?

The answer to that question can somewhat be attributed to the fact that there are more Trumpers in the Midwest than in New York of California, and more militia hiding out in more rural parts of those states, both do still exist in every state.

However,  I think what is also true, and are all aware of - now more than ever - is the fact that at least in America, female politicians - particularly Democrats - are blamed, demonized, and burned at the stake as 'witches' more quickly than males -  even for the same exact 'crimes.'  ;)

(And Gretchen Whitmer is a particularly smart, particularly witty, particularly outspoken/vocal, Democrat woman, who can be as tough as she can be tender - so there was likely a bounty on her head from the moment she was elected lol.)