After a confusing first-few opening shows, SNL nailed it, this week, with their cold open - I laughed so hard I cried ... parodying both candidates - with Alec Baldwin as Trump, Jim Carrey as Biden. 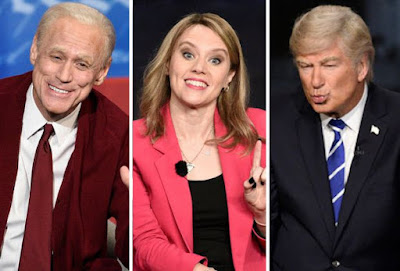 But no worries, don't trust my word for it - here's the full video :)

SNL knocked it out of the park on the Trump town hall parody, as they usually do with Trump - Alec Baldwin is always hilarious on SNL, especially as Trump - however, it's not hard to do, as Trump gives SNL so much ammunition already lol. 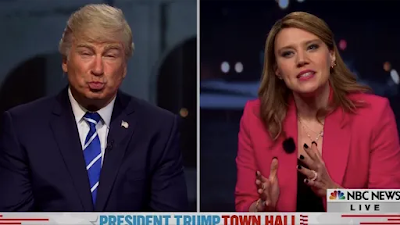 They even nailed the precariously placed black woman behind Trump, in an obvious - erm - "racial display," shall we say, in effort to garner black support for Trump, nodding her head to the point of possible health concern lol.
I mean, she nodded at everything he said, even inappropriately - I'm not sure she was even listening.
I mean, Trump could've said, "I just killed Biden, and I've just soiled my pants, and no one can do anything about it" and she would've nodded yes, in agreement lol.
Come to think of it, that would not be unlike most Trump-cult Kool-Aid drinkers anyway, but it was on public display ... 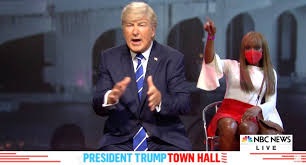 It was so odd -  she nodded in agreement with everything he said, often inappropriately - I'm not sure she was even listening.
(Unfortunately, that "racial support display" stunt actually backfired; not only did her odd behavior alienate both her and Trump from other black voters, but the Trump campaign choice to put her on display, like that, made the Trump campaign look even more race-obsessed than they already do.)
As for the Biden parody, OMG -  I LOL-ed when Jim Carrey (as Biden) put on the Mr. Rogers cardigan and sang "Won't You Be My Neighbor" ... 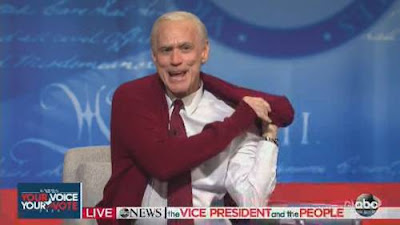 ... but nearly rolled off my couch laughing, when he donned the  Bob Ross wig, and started painting "happy little trees," and told us all how unique and special we were, as trees (!?). 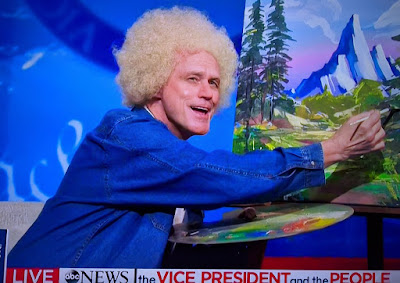 And I hate to say it, but it's true - Biden does tend to tell you a super long, meandering story before answering the question - but unlike Trump, at least he answers it? lol.

I think that unlike Trump - who is clearly trying to deflect and ignore the question - Biden is genuinely not try to distract, he just likes to tell stories first.

It's like asking someone the time, and they will, but they like to tell you how the watch is made first lol.

I'm pretty sure most grandpas are that way, actually.  In fact, isn't storytelling, as a way of imparting wisdom, actually a prerequisite to becoming a grandpa lol? ;)

Although "grandpa story mode" can annoy you, if you want an immediate answer to a question, it's also one of the things I loved best about both my grandfathers - it's very endearing :)

In fact, telling the long story first is, in and of itself, a lesson - "Slow down, appreciate, listen and learn.  Not everything has to be right this second." lol.

I have no problem with making fun of my own candidates - we need to laugh more, especially at ourselves.  I'll even laugh at non-PC jokes - but the joke needs to contain truth, to be funny, and never cruel.

(And by 'truth,' I do NOT mean blanket-generalized stereotypes that are unfair/untrue, which only perpetuate wrongful stereotypes/dysinformation.)

Like I said last week, the reason Bill Burr flopped with many is because although you can push the PC boundaries with comedy, it had better:

A) Contain at least a grain of relatable truth, even if uncomfortable truth.

Making parody of truth, to the point of the absurd, is why I have always loved SNL - and I'm glad they're back on track :)

Now, let's talk about Savannah Guthrie - and what a phenomenal job she truly did :) 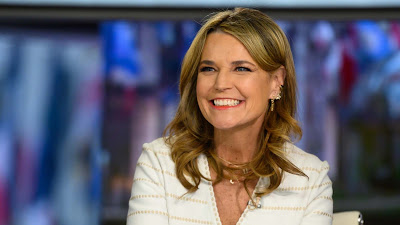 True story - I literally said this to my husband, Mark, the morning of the town halls, when I found out Savannah Guthrie was hosting Trump's town hall on NBC, when he asked me who she was/if she was any good:

"She's the morning anchor of the Today Show.  I think people underestimate Savannah Guthrie - I suspect she's going to surprise us. I think she'll pull a Katie Couric, especially being forced into this situation.  I suspect she's tougher than people think, because hey, it was no easy feat to steer the Today Show ship successfully, after the Matt Lauer debacle almost sank it, but she did - successfully."

"That's our bias - people think if you're cute and fun, or if you show vulnerability, you can't also be smart and serious, and that you can't get tough.  We women often feel like we have to choose between our looks and brains, or being fun or being serious, warm or tough - when these things are not mutually exclusive - with women themselves pressuring us to choose between them the most."

"I suspect that's also what happened with Savannah Guthrie as well, she's been unfairly pigeonholed in the "cute, fun, and friendly, but not much going up upstairs" category.

"Katie Couric used it to her advantage - and I'm hoping Savannah will too, that she learned from the master.  Something tells me she's gonna "Legally Blonde" it tonight, and shock everybody who underestimated her - with a "Take THAT, NBC, for putting me in this position. I know you put me here because you think Trump will be nicer to me because society thinks if you're cute, you must be stupid, like we have to choose between them.  I'm going to prove you can both cute AND smart, tender AND tough -  watch me" to boot :)

And that she did! LOL.

Lo and behold, my prediction was correct - Savannah Guthrie was ON FIRE - she refused to let Trump deflect/wriggle out of anything, better than any debate moderator we've seen with Trump yet, that's for sure - Go Savannah Guthrie! :) 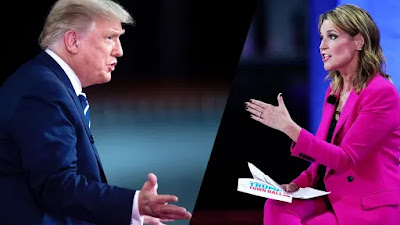 For those who don't know what I mean by "pull a Katie Couric,"  despite what's become of her now, Katie Couric literally had one interview that catapulted her career - and I saw it live :) 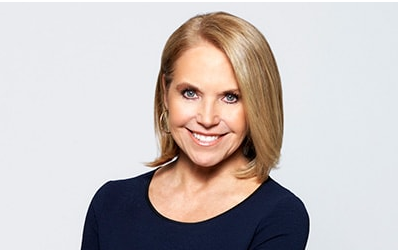 I got so excited over it, because I realized what a pivotal moment it was, as it was happening - not only for Katie Couric's career, but for women being taken seriously as journalists.

It was 1992, she was on Today, but people felt "iffy" about her.  People often dismissed her as the giggly, girl-next-door former cheerleader and University of Virginia sorority girl.

She was visiting the White House for a fluff piece - being given a personal tour by Barbara Bush, being shown the art work and the Dolly Madison tea set - when up walks up President George Bush Sr., making a surprise visit.

Katie asked if she could ask him a few questions ... hehehe.

I think he was expecting her to ask about Dolly Madison's tea set and such -  but instead, she asked him hardball questions - including how much he really knew about Iran-Contra and other pressing issues of the day -  for 19 minutes and 38 seconds.

Barbara first looked at her watch, then literally tried pulling him away by the arm, as he was getting a little mad.

But little stick of dynamite, Katie Couric, stood her ground - and managed to still end things with a warm thank you, a joke and giggle. 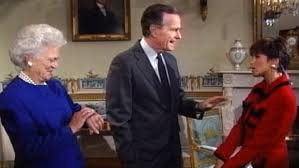 That 19 minutes and 38 seconds was literally like watching the real-life version of the final trial scene from "Legally Blonde" - proving Katie Couric had both brains and bravery, thinking fast on her feet - and it catapulted her into stardom :)

She used that bubbly, giggly, cheerleader, sorority-girl charm to make people comfortable, and then wham, out came the University of Virginia serious scholar in her lol - it was awesome!

Unfortunately, her stint as the first evening news anchor for CBS did not go well - the cheerleader charm doesn't translate well to an evening audience, me thinks.

I wasn't able to find a shareable video clip of the 1992 Couric/Bush moment, but here's a link to that video from the Today Show site itself - and Katie talking about what was going through her head, at the time :)