Six men on federal charges, seven on state charges - of course they were alt-right, white Trumpers!

(I have changed the picture since the mug shots of all of the six federally charged on now in.  The prior mug shots were from their prior arrests.) 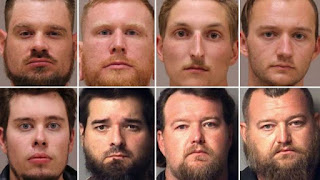 In an elaborate plot - which apparently included confiscating surveillance tapes of Governor Whitmer at her vacation home - the "anti-government," alt-right, Trump-supporting domestic terrorist group, plotted to kidnap, put on vigilante "treason trial," then put to death Democratic Governor, Gretchen Whitmer - as well eventually other Democrat governors, after armed protests at state capitol buildings with Democrat governors, in which they took hostages and "treason trialed" the governors. 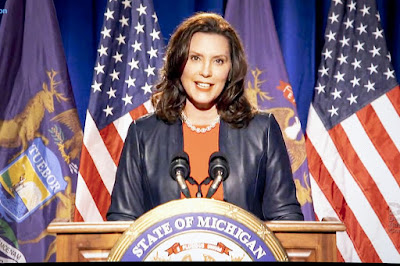 (The above link is from The Detroit News newspaper, but here's a national link to the story from NBC, and an international one, from Reuters.  And if you're a Trumper, and  don't read or trust any news but Fox News, note that Fox News actually did their job and reported it, too.

Governor Whitmer has been particularly targeted by Trump supporters/alt-right groups, because of what they consider to be an overly stringent lockdown policy, from March through June - even though male governor and mayor regulations were even more stringent (i.e. in New York, California).

Okay, people - I get frustration with government lockdowns - but only to a certain degree.

I also genuinely believe that most people -  on both sides of this issue, Republican and Democrat  - with the exception of Trump et al (who I think is mostly concerned with anything that might affect his re-election chances) - genuinely believe they're doing right for their families and the American people, whether those reasons are based in reality, or are instead based on political propaganda or "fake news."

However, having said that - I will never understand why people believe politicians, their press, and pundits - over medical doctors and scientists published data - about a virus!

Or why they demonize anyone who believes they're trying to protect public health by requiring PPE, ascribing ulterior motives that they're "just trying to take away your personal freedoms" - without any proof of that whatsoever?

And actually plotting to kidnap and kill them over it?

(All the while ignoring fascist/communist authoritarian, constitution-defying tactics from their own leaders, of course.)

I guess we liberal Christians truly do have very different definitions of evil, then, from many Christian Trumpers :(

I'm sorry, unlike your average American, the conspiracy theorists demonizing as "evil" medical doctors/scientists - and/or anyone who implements guidelines based on published study data -  simply because they temporarily require you to socially distance and wear masks - which caused no severe physical, mental, emotional, or even economic harm or distress to anyone -  are delusional, paranoid, and, well ... BAT. SHIT. CRAZY.

Actually trying to kidnap and kill people, believing they deserve to die over it, is criminally delusional, paranoid, and bat-sh*t crazy - enabled and spurred on by the aforementioned whack jobs.
Sick, sick, sick.
Governor Whitmer called them "depraved," and  issued the following statement:  "None of us has faced a challenge like Covid-19 ... we are not one another's enemy. This virus is our enemy, and this enemy is relentless."

And what does our illustrious, self-proposed "Law and Order" President have to say now?
Crickets so far.

Based on track record, he'll either ignore this like it didn't happen, or praise them as heroes, too.