So, it IS  right-wing press, of course, which already makes them (Russian-dysinformation influenced) suspect lol.

Currently,  they are literally guessing that Mitch McConnell's lips and hands are "likely due to senile purpura" - which is easy bruising that comes with age, especially if on blood thinners, after minor trauma.

Erm - being in healthcare myself, and caring for both grandparents on blood thinners into their 90s -  I've seen senile purpura.
Typically, if just "minor" trauma, it's still fairly localized to the injury  - unless - it's a full extremity trauma, to the level it requires medical attention.
Extremities can remain a darkish purple color without injury, but it's typically the ankles and feet - due to less circulation flow to the lower extremities, in general.

As an example of hand injury to the degree such that it requires medical attention, my grandfather was trying to hammer a nail in a wall of his work shed, missed the nail, and hit his left hand, which was holding the nail.
He was on blood thinners, so the skin tore and bruised easily, and he needed to be stitched in ER, but luckily broke now bones.  The entire hand bruised nearly that same color.

HOWEVER - my grandfather was also in his late 80s.   McConnell is the same age as Joe Biden, 78 - who has no senile purpura - at least not to that degree.   Also, it was just one hand - and it was due to blunt-force trauma to the hand, from the hammer.
Thus, the amount of bruising and bandages on both hands (and lips?) is not consistent with senile purpura in a 78-year-old man who'd experienced "minor" trauma, I'm sorry ... 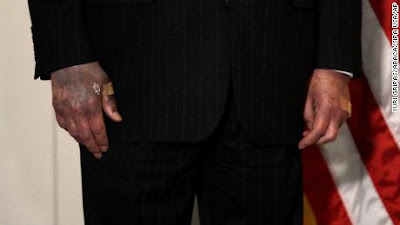 In fact, had McConnell been triaged in the ER -  and was not known to have another health condition as the cause - they likely would've asked him how he'd been injured.
Perhaps he hit himself with a hammer on both hands and lips  - or someone else did  lol.
Oh, we can dream, can't we?
(Just kidding ... mostly) :)
Speaking of the lips, senile purpura typically does not cause swelling, unless there's been significant injury - and there actually seems to be a certain degree of swelling to his lips? 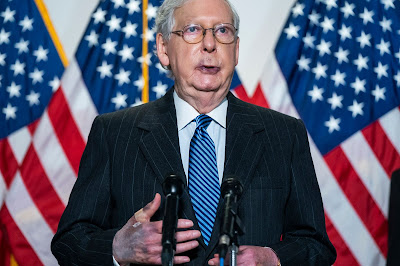 I have seen it worse in smokers and heavy drinkers, though - particularly drinkers - think of the "gin blossom face" and "drinker's nose" ... 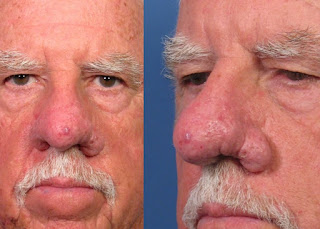 ... and in celebrities, think of the most famous of "gin-blossom nose," W.C. Fields. 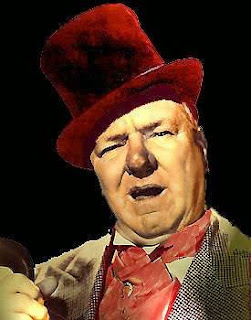 HOWEVER again - though it can someone affect the lips and cheeks, it's usually the nose, and typically, more red than purple - and that still wouldn't explain the bandages.

Of course, I'm not a doctor, and I review health information documentation more than I see it.

I've seen lips turn purple from allergic reaction, but not the extremities, at least to that degree, as well as auto-immune conditions like lupus, but they're also typically more red than purple.

Also in frostbite, but we can rule that out - well, other than the icy blood that clearly runs through that main's veins lol

Otherwise - and again, not a doctor - the closest thing I've personally seen to that level of purpura - in fact, the first thing I was reminded of - was rhabdomyolysis - which although can have various causes (including chronic cocaine use? lol) - is most often caused by either acute or chronic kidney injury or failure ... 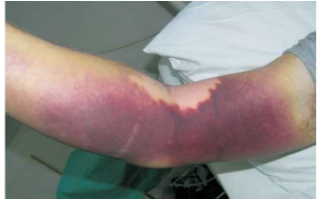 ... and/or the resulting bruising that occurs from kidney treatment via hemodialysis for the kidneys.

But again, dialysis bruising is still typically near the fistula port itself, rarely both extremities or face - but in true rhabdomyolysis from untreated acute or chronic renal failure, it can happen.

Other possibilities are the result of other types of surgery, vein therapy, a blood disorder,  liver cirrhosis, and lung and/or cardiovascular issues - and we already know he had a triple bypass in 2003.

Regardless, Kentucky is voting for its next senator in two weeks - does McConnell really think it's going to help his case that he doesn't clarify what the issue is?

If some injury happened to him - like the "miss the nail" hammering incident that my grandfather had - why not just tell people, so they're not concerned?

Otherwise,  as I said, I'm no doctor - and as I've just said, it could be a lot of things.

So until then, I'm going with my original theory - the physical transition from Senator into Emperor Palpatine/Darth Sidious, due to inherent evil, is nearly complete lol.