I Have a New Campaign Slogan for Trump: "Help Me Remember My Own Supporters Again" ... LOL

As we know, in 2016, Trump's slogan "Make America Great Again" helped win the election.  But this go 'round, he has had trouble having a clear slogan and campaign focus (or at least staying with a campaign focus).

He tried "Keep America Great," but that didn't take.

Even his old MAGA isn't so popular with the nation, right now, considering current affairs of racial injustice and COVID have revealed that maybe America isn't was great as everyone pretends it is, and perhaps never really has been.

Thus, Trump's campaign seems to have really had trouble focusing on one particular platform and seems to be all over the place?

In fact, the other day, his lack of clear campaign focus and platform became so bad, that he literally begged suburban women - many of whom previously supported him until this past year,  to like him:

"Suburban women, please like me? I saved your damn neighborhood!"

Well, at least he's aware of where he's lost support - because he otherwise has recently claimed not to know some of his biggest (and most rabid) supporters   ;)

And he "saved suburbia? "
What the ... was there crack in your COVID meds or what?
In what way did you do that?

Oh, and thank you also for those white redneck Trump paraders, driving through my neighborhood with giant Trump flags, whupping it up and hollering - though they don't even live here!

And thank you especially for the white male Trump parader I saw at McDonald's, on Saturday, whupping and hollering - with a giant Trump flag on his pick-up and wearing a gun holster in the parking lot of our neighborhood McDonald's - I especially felt safe with that guy, in our neighborhood!

In fact, gun sales have skyrocketed, here in Kentucky - on both political sides.

And no joke - over the past two weeks, I've heard 5 men, both white and black neighbors and friends, in both my suburban neighborhood and others - on both political sides - now purchasing guns - just in case they're needed come election-day craziness and there's lack of peaceful transition.

These are all 100% true stories from my suburbia.

And thank you for having federal agents tear-gassing and detaining in vans even peaceful protestors!

I wouldn't worry about not having a good campaign slogan, Trump - allow me to provide one for you, based on your responses - hehehe.

"Help Me Remember My Own Supporters Again!" #HMRMOSA"

Because whenever Trump is asked about white supremacy groups, anti-government militia groups, proof-less conspiracy-theorists like QAnon, or even Ghislaine Maxwell, instead of denouncing them, he says either "good people" (like in Charlottesville) or "I don't know them/him/her."

Last night, NBC's Savannah Guthrie questioned Trump on QAnon, and at first he tried to say "I don't know them." 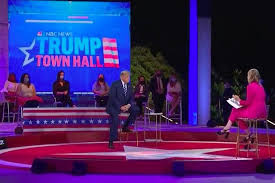 After she showed his tweet, where he'd retweeted one of their conspiracy theories, proving he did know QAnon, so he finally admitted he did, but said he "doesn't know much."

Additionally, most of his agenda, including his failed "umasking" of the Obama administration, has been at the urging of QAnon.

For the record, and for those not paying attention, Barr closed the Obama/Democrat "unmasking" investigation - without any findings or charges - which is why Trump is currently targeting his own pick as DOJ Attorney General, William Barr.
Up until now, Barr has done some very odd, questionably constitutional/legal/unethical things over his loyalty to Trump, including backing tear-gassing of peaceful protestors in front of St. John's Episcopal Church in D.C.

In other words, essentially, Barr has been willing to twist the definition of law for Trump out of loyalty, but he drew the line at actually fabricating evidence where none exists - probably because he would easily get caught doing so - and this is why Trump is mad at him ;)

Regardless, back to my point - if I were a Trump supporter, I'd be very concerned about what Trump says he "doesn't know" as POTUS.  That wouldn't exactly boost my confidence in him.

And if I were actually a QAnon supporter or white supremacist or  anti-government militia - which clearly I am NOT lol - I'd be wondering why he doesn't appear to know us as his biggest supporters? lol.

Of course, the answer to that is, he doesn't want to alienate entirely his more whack-job supporters, providing most of his votes and providing so much "help" to the spread of proof-less dysinformation, so he just pretends not to know them instead, but also refuses to condemn them ;)

So ... white supremacists, anti-government militia, and QAnon conspirators - you're actually okay with Trump pretending not to know you?

Because I'm clearly not a member or believer in any of these groups - but if I was - and had been the primary impetus for launching several investigations, new policies, and getting a president elected/re-elected by spreading proof-less, Russian-style dysinformation  - I'd for dang sure wonder why the heck the President kept pretending not to know who we were lol?!?

And I have to say, if you feel like you have to keep these things a secret - has it ever occurred to you that it's not because "the government" will get you, but 9/10, you're hiding because it's something you know you shouldn't be doing because you know its wrong?

And if you really believe Trump doesn't know your group, then perhaps it's not Biden having dementia that you should be worried about! lol.

Speaking of Biden, in a stark contrast to Trump's Town Hall, over at ABC, during Biden's Town Hall, Biden admitted the 1994 Crime Bill was a mistake.

Well, it took him a minute, I should say - because first he rattled on about what was good about the crime bill he helped write, like violence against women, getting rid of imprisoning for minor drug offenses, and more funding for police (he clarified it was supposed to be about more community policing, not jump squads), and new prisons for rehabilitation, not housing more criminals for less crimes.

But George Stephanopolous pressed him, and he admitted it was a "mistake," in that what he meant to happen from a federal level didn't happen with the funding given to the states.  Getting caught smoking marijuana remained a crime you could be jailed for.  Funding for police was used for "jump squads" instead of "community policing," as intended. And as we all know, the crime bill did the opposite of what was intended, and ended up enabling and entrenching our already broken justice system. 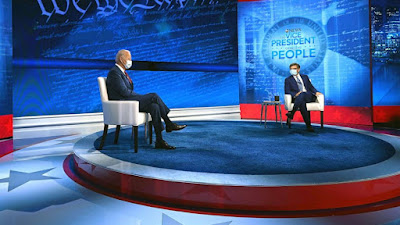 FYI, community policing is getting back to the old-school way of policing, where you have a "cop on the corner," that everyone knows and they know you - not only to observe if anything goes wrong, but to talk with you, get to know you, and vice versa.

In fact, George asked him, "You once said, more cops makes less crime - do you still believe that?"

He went on to say that good cops can't stand bad cops ... very often, good cops get dragged into something a bad cop is doing, but there's often nothing they can do about it (without risk to themselves) because of lack of transparency."

This is true.  Police officers always defend their own.

Many think this is like military, but I just confirmed this with my former army-ranger husband - actually, military is different.

Yes, in the military, you are a united front to everyone else and defend your own, even when wrong - but within the group itself, if you effed up, your troop will be all over you like white on rice - and not always in a "by the book" way, for endangering lives unnecessarily and for making the troop look bad.

So yes, both cops and soldiers have each others' backs against anyone else, in united front - but the difference is, within the unit itself, soldier units call on the carpet their own, whereas cops do not - they just pretend it didn't happen, there was no error, etc - and this is what needs to change.

Regardless, you could've been a bit more forthcoming with it, but it takes a brave person of integrity,, to admit they were wrong and that you made a mistake at all - thank you, Joe Biden, for doing so :)

Also, bravo to both Savannah Guthrie and George Stephanopoulos at NBC and ABC, who both did a phenomenal job at at least attempting to keep both men focused and held accountable for their words and actions.