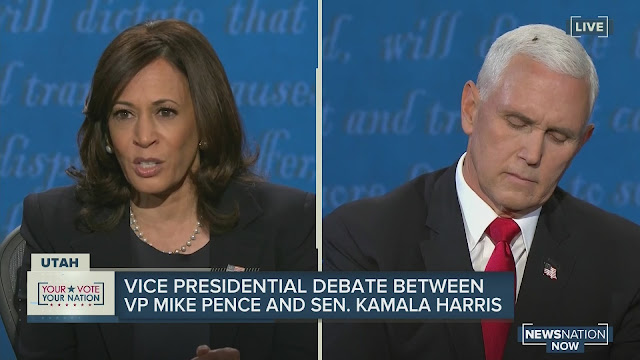 (Yes, that's a huge fly, sitting on Pence's head - it's not your TV screen, as we thought, too.  It was drawn to him and sat on him forever, like flies on ... well, never mind ;)
*Updated below, but a bit of an overview added here, too ...
I'm surprised people are saying neither did well - Kamala flubbed a couple of times, true - but IMO, she dominated the debate, nailing several answers and saying exactly what I thought needed to be said, and very clearly answered questions (except Pence's bait/projection accusation 'question' - see below).
Whereas Pence, IMO, clearly largely avoided answering many questions by deflecting, often twisting words she'd just said two seconds ago, and even hilariously accusing she and Biden of "plagiarizing" Trump's COVID response lol
______________________________________________

More of my thoughts later, but she's my hero, WOW :)

She and Pence both floundered a bit - actually both avoided - answering the question on what they would do if the President was "disabled" in some way, but other than that - IMO, Kamala's kicking it :)

Absolutely ADORE this woman, she does NOT play, she's amazing - her ability to give clear, succinct, direct answers within the time given - as well as clearly articulate and explain her rationale, and keep her eye on the ball (well, until the last 20 minutes or so).

She could improve in some ways, and flubbed on a couple of things, but in other ways, I thought she was actually better than any candidate I've ever seen, at this level, at least when it comes to keeping her eye on the ball and not getting distracted by deflection accusation (except the last 20 minutes or so, she started to lose focus).

More later (debate still going), but also, she handled Pence SO well - who though not rude or belligerent like Trump, attempted to roll over/interrupt both women, when speaking several times - both Kamala and Susan as the moderator - even completely ignoring the moderator's questions in favor of his own agenda, and her efforts to move on to the next question entirely, demanding that he continue to speak, as opposed to Kamala, who most often requested it.

Kamala had literally JUST said, "Biden's plan will raise taxes for only the wealthiest and corporations."
However, Pence's rebuttal twisted what she'd just said, and tried to say she said, "raise the American people's taxes."

During her rebuttal, instead of taking the bait and getting lost in defense, she simply kept her eye on the ball, and thus repeated it two more times "Biden will not raise your taxes if you make less than $400,000."

Did you not love that when the moderator asked Pence what Trump's specific plan was to protect pre-existing conditions if Obamacare was repealed, instead of answering that question, he rambled about abortion and the Supreme Court, accused Kamala of plotting to "stack the court" (like he, Trump, and the GOP have done/are currently doing?), and when Kamala didn't take that bait, he accused her of not answering the question asked?

My, my - someone thinks very well of themselves, don't they?

Because thinks he can demand that other people answer his loaded, bait 'question' (cough, cough, accusation) about "packing the court" - which is clearly just projection of what the GOP is doing themselves, as we speak, anyway - but refuses to answer anyone else's questions, particularly the actual debate moderator, and they can be flatly ignored?

I'd never really heard Pence speak much before, because let's face it, he gets - erm -overshadowed.
I was expecting a more humble but confident man - but instead, he appeared smug, smarmy, quite arrogant, and actually - kinda shady/shifty, at times?
His dishonesty and word-twisting almost rivaled Trump's lol - but at least he's not belligerent and unstable? lol

And by the way, note both Trump and Pence have now BOTH successfully avoided answering the same direct question via deflection, with both debate moderators - specifically how they're going to repeal Obamacare, but still protect pre-existing conditions.

Sorry "gentlemen" - and I use that term loosely - it's pretty clear that you have no "replacement plan" for Obamacare at all - and I'm sorry, just screaming you'll protect pre-existing conditions on Twitter, without explaining how, doesn't cut it.

Well, for now, since it's getting late (though more perhaps tomorrow) - at least it was a debate rather than a debacle - albeit a contentious one at times.

And I, for one, would've really liked to hear Pence's answers to some of the actual questions he was asked, rather than dodging them completely and deflecting - IMO, deflecting and dodging, to the degree that he did - to the degree the Trump camp does in general as an MO - actually blows an opportunity to inform the American people of what their plans and policies actually are (if they even have one lol).

Yeah, so for those not educated much in political science - that's a communist strategy - making "the nation and Trump" - or "the people and Trump" - synonymous and interchangeable and inseparable -  when they're not.
That "interchangeability" became so obvious even a Trumper might notice that one lol.
(Then again, maybe not.  The Trump Kool-Aid goggles and earplugs are pretty thick.)
In fact, I counted at least 8 times he twisted/reworded what she'd just said - and I didn't hear a single time she twisted his words, and I was looking, because she's a former prosecutor.
I did leave the room for about five minutes, though, so perhaps she could have then and I missed it, but not during the time I was watching - or maybe when the fly stole the show lol?

Oh, and Pence stating "Biden is plagiarizing Trump's COVID response."
WHAT?
Hahaha, yeah, sure -  mask-wearing and all.
Get outta here with that, that didn't even make sense - Lol.
Come on, Trumpers even you laughed at that one, right?
Oh wait - I just thought of the only time Kamala even came close to word-twisting and "plagiarism" ;) ...

When she said, "Trump's response to COVID has been the greatest failure by a U.S. President in history" - clearly borrowing and mocking the president's nearly daily use of the phrase "greatest in history," to express his personal opinions (and lack of knowledge about U.S. History) as fact lol.
However, I personally thought it was hilarious, extraordinarily clever, and a stroke of genius :)
Also, I may surprise you on this one - some of the commentators are now talking about how they felt the COVID issue wasn't as discussed in depth as it should of been; specifically, mask-wearing.

To be honest, I think that was intentional, and trying to be respectful and careful of the president's current COVID status, on both their parts.

I mean, the POTUS currently has COVID, refuses to wear a mask or require others to wear one at functions, and there's much debate about it.

Had they gone there, it could've very easily devolved into more personal territory and he said/she said arguments on COVID, and they could've remained stuck there, in a hole that neither candidate could get out of.
To both their credit, I think neither one wanted to get stuck in the rabbit hole, and instead, stuck directly to (vaguely) answering questions asked regarding COVID.

It's very difficult to believe someone when they speak without conviction - it's like they don't even believe in what they're saying themselves, so why should we?

Kamala, on the other hand, came across as genuine, sincere, and at times, passionate. When she speaks, you can tell that she really believes in what she's saying, and therefore, in turn, she's easier to believe.
Also, was it just me, or did Pence not look well?
He looked a bit paler, to me (but seemed to gain more color later, as the conversation became heated) and had bloodshot eyes - particularly his left eye ... 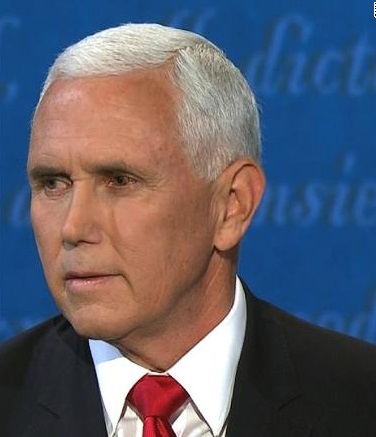 In fact, that was the first thing I noticed/said at the start of the debate.

Maybe his eye is always like that and I just never noticed?

Also, allergies and blood thinners can cause the blood vessels in one eye to appear like that.