*Edited - I removed a significant portion of this post on whether or not the results either proved or disproved genetic links to anyone else.

It's not what was suspected - in fact, it's even weirder! lol

There were surprising genetic matches and findings that you may choose to look into further for health purposes, etc.

Here are the ethnicity results from Ancestry.com after my DNA test, just received today. 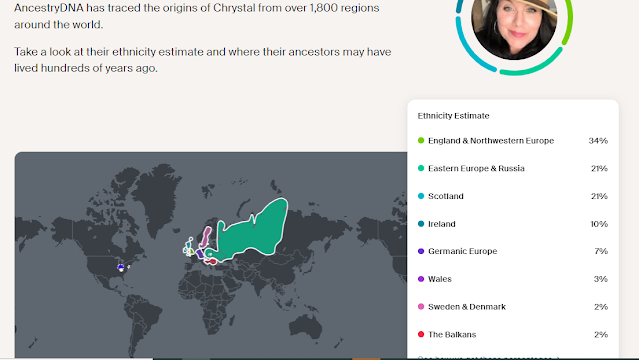 Here is the breakdown by parent.

Because of my closest genetic matches -  and other supplemental info we've discovered -  we've determined that Parent #1 is Mom and Parent #2 is Dad.

Being that we receive 50% of the DNA from each parent, this explains my ethnicity percentages being roughly half or theirs.

As for me, the mostly British (34%) was no surprise - but most surprising was being equal parts Scottish and Polish -  21% each.

I had no clue.

However, this can be explained with the surprising genetic matches I previously mentioned, but I won't go into it publicly.

There is a footnote about specifically being from the West Galician and Sub-Carpathian region of Poland, specifically Rszeznow (Southeastern/Central Poland, which came under Austrian-German rule prior to WW2, explaining the Austrian/German heritage).

Only 10% Irish, in the end, specifically, Northeast Ireland (Connacht and Mayo counties).

7% Austrian/German (originally Northeast Germany, many migrated to Austria and Poland under Austrian rule) was no surprise, nor the 3% Welsh - but the 2% Swedish/Dane was - but then again, not really, considering British (and Scottish) history.

Otherwise, unfortunately, so much for family rumors - though the Polish footnote does include Rzeszow County, which was notably one-third Jewish until WW2, it is not overtly apparent that we are Jewish, as "European Jewish" has its own genetic marker and it did not appear on my results.

HOWEVER  - Ancestry.com does have a general note on European-Jewish heritage, stating that further autosomal testing may be required.  This further, more specific testing would include testing for Ashkenazi or Jewish genetic markers.

So though it's still possible, it's very unlikely, since the more obvious genetic markers for European-Jewish heritage weren't immediately apparent on my results.

Just posting this as an FYI to family - and with that, I'm outta here :)

Email ThisBlogThis!Share to TwitterShare to FacebookShare to Pinterest
Newer Posts Older Posts Home
**PLEASE NOTE** - I use no other social media and my comments are closed due to persistent harassment and impersonation by one individual - sorry :(