Before I begin,  let me just apologize in advance for any  paragraphs in overly large font.  The new Blogger format that rolled out in July is prone to this, for what reason I don't know - it doesn't appear that way when I post, but when I view it later - yikes!

Suddenly, a paragraph or two is in huge font! Then, when I correct it, of course  another paragraph does it. This can take up to 15 minutes to correct all the sudden font-size jumps after posting - arggh!

Sometimes I don't have time, because often, I just type it and go back to work, planning to edit later, when I have more time  lol 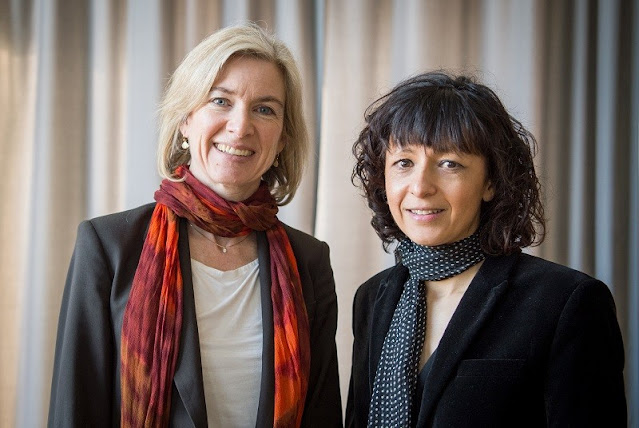 No, they didn't discover Cas - nor were they the only ones doing work with CRISPR - but they did develop the effective CRISPR/Cas9 tool that brought us gene-editing therapy.

I wish everyone knew how groundbreaking CRISPR gene editing actually is.  It's the wave of the future, already essentially curing some rare genetic diseases and infectious diseases - although right now, it currently has a price tag of at least $1 million.
Though that price is somewhat warranted, considering the complex technology that goes into it, most of the price is decided by pharma companies themselves.
Considering it has only been proven to essentially cure rare diseases, at present, pharma companies using the technology can get away with this higher price because it will be used on small subsets of the population, but can still make a profit - see how that works? ;)

I am absolutely fascinated with this technology; in fact, I wrote a post on it, on April 19th, called "Looking Towards the Future:  Coronvirus, Gene Editing and CRISPR?

Considering what I do for a living - which is transcribe interviews for an NYC independent marketing company, hired by pharmaceutical or biotech companies, to get feedback during product development/clinical trials from insurance companies, clinicians, and pharmacists before product launch) - with the advent of COVID, I was looking towards the future, hopeful that at some point, SARS-CoV2 (the virus that causes COVID) can not only be disabled by CRISPR, but actually used to cure other diseases - turning yesterday's plague into tomorrow's cure :)

Now, I'm sure some religious-zealot nuts - who always knee jerk as immediate reaction without investigating/researching - are going to say it's "playing God"
However, I look at this way, as a Christian, who also believes in science -  God LOVES science - he IS the master scientist, after all - and he already gave us the intellectual capacity and resources we need to figure out our own problems - we just have to use them and figure it out :)

So I was thinking, last night, about transcriptions past that I have done, particularly over the past couple of years - beyond what we will (eventually) do with immunization - about what we've only recently been able to accomplish by harnessing the power of the virus to actually cure other types of illnesses.

Since then,  we've been able to take a small amount of certain highly evolved viruses and introduce them to make great strides in defeating certain types of cancer, as well as certain rare diseases, in a process called "viral therapy."  We are still in the early stages of this research, but it does appear promising.

The most prominent form of this "gene therapy" or "gene editing" is via CRISPR - which will likely be the future of curing many diseases other than cancer - including genetic ones.

CRISPR gene editing essentially uses a RNA to identify Cas protein enzymes produced by forms bacteria and viruses to identify foreign substances and either target and destroy them (cancer), or more recently with viruses, break down their genetic code - and actually use it to supplement what's lacking in our own DNA to "fix" our genetic mutations and deletions, since viruses replicate by combining with our own DNA, or "transcribing" it into their own.
Especially a highly complex evolved virus such as HIV, which actually has natural "DNA ripping" properties  - meaning the virus uses an enzyme to rip apart segments of our DNA and RNA and then injects/binds their own nucleotides to ours to survive and replicate themselves - to bind with the nucleotides of the cancer and/or our own DNA - resulting in the patient appearing to no longer show signs of cancer or a genetic disorder.

Why do they most often use HIV?

Which means, in very basic terms, that HIV has the ability to "unzip" virtually every nucleotide molecule "rung" in the "ladder" in your DNA/RNA, as opposed to just targeted segments, like other viruses.

HIV then binds to your DNA nucleotide sequence, transcribes it,  translates the genetic info back to the virus, which creats a sort of own "copy" of your nucleotides, then rebinds its "copy" nucleotides with each broken rung of our DNA ladder, then "rezips" it back up -  merging your DNA your DNA with its own, replicating itself at lightning speed - only your body doesn't recognize it as a foreigner as readily because it partially uses your own DNA.

(I hope that makes sense - that's a very basic description, relying on- and going way back to - my college microbiology class days lol.)

Of course, there's a hefty price tag for Bluebird - it entered the market at $1.3 million (thus, no private or public insurance will cover it at that price, it's out of pocket only).

First of all, we're we're talking genetically altered HIV, and secondly, due to targeted genetic alteration, one essentially cancels out the other's negative genetic properties.

Essentially, adding just enough of a genetically altered virus can either supplement what is lacking - or inhibit/delete production of what's being overproduced - in your own DNA/RNA, so that your body can now do what it was originally designed to do before genetic anomalies occurred :)

Bluebird was approved by the FDA - and thus far, no one who has received the therapy in clinical trials has developed HIV (or any other virus used in CRISPR treatment) - and they do appear to be "cured" of hemophilia A.

A similar therapy is being trialed in sickle-cell - also expected to be approved by the FDA -  and likewise, has a million-dollar price tag - so forget about public or private insurance covering that cost; again, out of pocket.

And yes - there is always the potential to use this genetic engineering for unethical as well as ethical purposes.

However,  CRISPR is still too fledgling for us to have the knowledge to do that, we're just now figuring it out.

Just in case, these treatments and current trials are being heavily monitored/regulated, even in the U.S., to ensure ethics and safety maintained.

Thus, I was thinking - if this SARS-CoV2 is as potent and highly evolved as they say - if we can learn more about how it works, weaken it, and use it as immunotherapy for innoculation - the next step could then be another powerful weapon in actually using it to someday cure other diseases like cancer or genetic diseases using CRISPR?

Of course, we're nowhere near that point yet, we don't understand it enough - and just think of how long it took to understand HIV enough to treat it adequately, and then use it in this type of research - almost 30 years.

(But then again, though we knew about CRISPR since 1987, we didn't know how to use it effectively until the past few years.)

Also thinking about spiritual people asking where God is, in all of this.

I personally don't think God did this or is punitive - I think God gets credited and blamed for far too much already lol.

I think you can see God and Christ in this, if you look in the right places, as I've posted about previously  :)

"20 You intended to harm me, but God intended it for good to accomplish what is now being done, the saving of many lives."

Just like everything else, bad things that happen - "the rain falls on the just and the unjust" - regardless of random or intentional - but it can eventually be used for good - if we recognize that and use our free will to achieve it :)

Thus, yesterday's shorter-term plague can become tomorrow's cure - even for a more chronic plague that we've been battling for a couple of centuries?