As I Predicted ... Plus A Slap-In-The-Face Tweet to COVID Victims and Their Families

... in THIS post from two days ago - my predictions (based on his track record) are copy/pasted again here, without being edited one iota:

"Thus, *IF* if it turns out that he does have the more mild phenotype of COVID and recovers, based on his track record of denying science and the severity of COVID for fear out of impacting his chances of re-election negatively, he will do 1 of 2 things after recovery: "


2) Tout the Regeneron antibody cocktail (Remdesivir) as a "miracle cure" - even though Remdesivir is NOT a "cure" - at most, Remdesivir shortens the life of the virus much like Tamiflu, if you catch it early enough."

Yes, Elvis has now left the building - and he didn't pick just one of my prediction option - he essentially chose both -  when he tweeted this today: 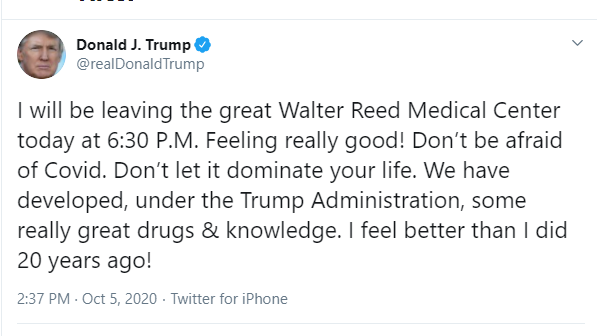 However, I didn't laugh at this one - nor did I take any pleasure at all in the fact that I was right.

The truth is, I literally cried, tears and all, when I read it.

I cried because of the cavalier nature with which he dismissed all those who suffered and died because of COVID, as if they just weren't "tough enough," like he imagines himself to be.

I cried because I realized how many more would die, because of tweets like this one, from our POTUS.

And I cried because I realized there's absolutely nothing I can do about his lies,  and preventing this needless suffering and death -  besides rant about it, here, hoping I wake up at least one Trumper to the truth and reality of this virus.

As I mentioned, my stepfather-in-law was recently hospitalized for over a week with COVID - the severe phenotype.
He is 73 - a  year younger than Trump.
Unlike Trump, he was a recent mountain-climber, before COVID,  which is something Trump never did, nor ever could or would do, even on his best day.
Also, unlike Trump - prior to COVID, he was a daily runner and tennis player, ate healthy, and was in excellent health.

But he caught it anyway -  realizing that he likely hadn't been wearing his mask properly - NOT because he wasn't "tough enough" or "had an underlying health condition," and as I said, he's 73 - a year younger than Trump.

Thus, my stepfather-in-law would now tell you this himself ...

Though it's true the fear of COVID should not dominate your life - COVID WAS something to be afraid of.

In fact, it was the most frightening, painful thing he's ever experienced in his life, the fight of his life - and remember, this man has climbed mountains.

Now, he encourages everyone, more than ever, to follow social-distancing and mask-wearing guidelines - and to make sure you wear your mask properly - over both your mouth and nose, no gaps in the mask anywhere.

In fact, though I didn't share this previously, at one point, when the pain and difficulty breathing became so unbearable, he expressed to us via text that he was so tired, he just wanted this to end - and he was ready to let go.

All we could do is text back and tell him to keep fighting, don't let go, he was going to make it through this - and he finally did.

However, many people have died from it.

If you do test positive, there is no guarantee which phenotype or form you'll get, mild or severe, or how your body will react to the virus - regardless of how healthy you are, like my stepdad-in-law - or even  your age.

However, I can guarantee you what will NOT happen, is that unless you signed up to be part of the initial clinical trial for experimental drug, Remdesivir, already, you will NOT be receiving the special treatment that Trump received.
That is because Remdesivir is not yet approved by the FDA,  so it will not be offered to you, unless you were already part of the initial clinical trial underway.
Even if it was offered to you, neither private or public insurance will cover it yet, and here in America, we do not have "compassionate use" programs before government approval, like European countries have.
Remdesivir was special treatment that Trump received for the low, low tax price  of apparently $750 in tax money.


Even if you could - again, Remdesivir is not a cure - at best, it can only shorten the length of the virus time, if you catch it early enough.

Regardless, for Trump to cavalierly dismiss a virus that has caused so much suffering for people like my stepfather-in-law, and death to countless others - with more to come, with tweets like this one - over nothing more than increasing the chances of his own re-election - is unconscionable, inexcusable, and indefensible.
Trump is now literally a physical vector for spreading COVID-19, as he is still contagious, and brazenly had himself filmed removing his mask when he walked in the White House - and you're okay with that?

Seriously, folks - I'm not trying to be mean or nag -  but I don't know any other way to say this  - and at this point, this is too dangerously socially irresponsible to sugar coat and joke about, anymore.

Decide now, while cases are increasing with the cold weather: Exactly how much Trump Cult Political Kool-Aid you are willing to drink - to your own detriment?

Why -  so you can help Trump get re-elected?

Do you not realize that by taking off his mask in the White House while still contagious, on camera - that he just did proved he wouldn't do the same for you - and is in fact, putting countless others at risk at the White House, with more planned campaign events and rallies this week?

Once again, if I'M wrong, the worst that can happen is that you're safe and I just look stupid and hysterical.

However, if YOU'RE wrong, the worst that can happen is - you catch it and die.

So it's decision-time - just how politically brainwashed, gullible, and stupid are you?

Socially irresponsible, selfish, reckless, and insane - all so he can win an election :(

IMO, he's a very sick man, both physically and mentally - but I do NOT wish him ill.

What I DO wish for him is to follow medical advice and ensure that he receives proper physical - and psychiatric/mental - healthcare.

Wake up, people - no one can "control" you without your consent - and the only people pulling the wool over your eyes/hoaxing/attempting to control what you believe and how you behave, during a legitimate public health crisis, are Trump et al.

The dysinformation needs to stop - you are now literally enabling the spread of a potentially deadly virus.

At some point, you know all of this dysinformation will lose its effect and the truth will come out anyway.

However, we will NOT forget - your responsibility in spreading dysinformation about the virus, endangering the lives of millions - over nothing more than Trump's re-election.

In time, I have faith that you WILL be held accountable  - not for negligence, but for your active participation in spreading toxic dysinformation, and enabling the preventable deaths of thousands of people - people not at war or defending this country - just everyday American civilians.