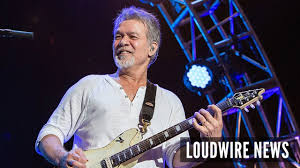 He was considered by many to be among the greater rock guitarists in the world.

In fact, he is credited with creating the original famous/infamous 80s guitar solo.

On the other hand, the band itself, Van Halen, wasn't one of the greatest bands of all time - they were kind of absurd, really - but they were fun :) 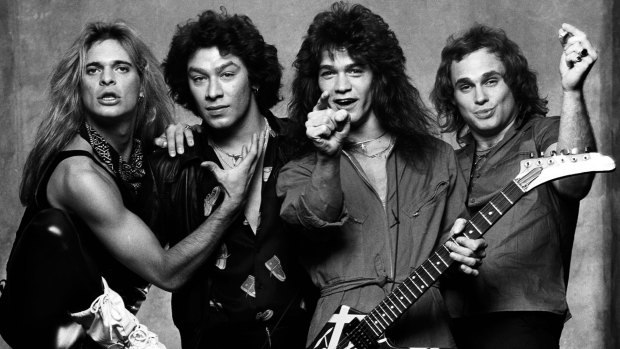 Fun memory ...
Okay, so ... I saw them live, with my first love (Ben), at Rupp Arena here in Lexington, September 30, 1988 - with my  big hair, big Sebastian Spritz Forte tidal-wave/claw bangs, and Ben with his Johnny Depp mullet,  right? :)
Concert tours aren't usually kicked off here in Lexington, Kentucky, believe me, so this was especially memorable, that for whatever reason, Lexington was their very first concert venue for the "OU812" tour (when Sammy Hagar took over lead vocals).
It was kind of a big deal for me, because growing up evangelical in suburban Cincinnati, I wasn't allowed to listen to rock music or go to concerts - so this Van Halen concert was my very first rock concert - and I had a blast! :)
(Well, officially, my first "secular" concert was actually an embarrassing Rick Springfield, at age 14, which my mother only consented to because my best friend's mom went with us and told her he was "descent." lol)
Now, however, I was in Lexington, going to college at U.K. - lettin' loose and livin' a little :)

I chose Van Halen as my first concert, not only because they were my boyfriend's favorite (well, tied with Bon Jovi), but because my mother - and our former charismatic/evangelical church - especially hated Van Halen and said they were "of the devil" - so oooh, what a rebel was I now! ;) LOL
Mind you, they based this opinion solely on "Van Halen hands," which they mistakenly thought were the "sign of the devil." LOL 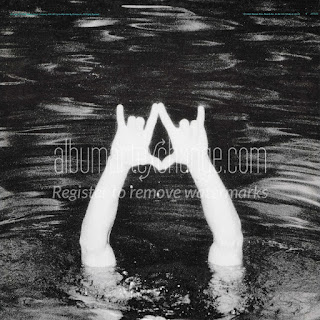 Yeah, erm - they were wrong.
(What a shocker, evangelicals being wrong about what's evil and what's not).

Because if you'll notice, "Van Halen hands" have the thumbs out - and this thumbs-out hand sign also means "I love you" in American Sign Language!

Whereas the "sign of the devil" AKA as "devil's horns" or "Babylon Bull" hand sign is thumbs in ... 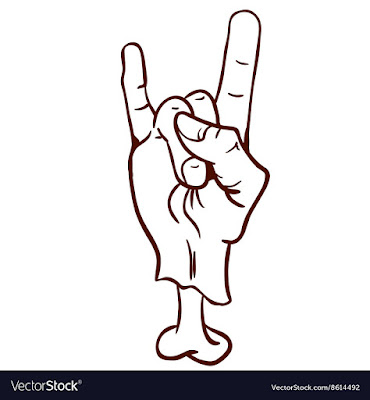 Also, the thumbs-in hand sign is the hand sign for the University of Texas Longhorns - but they never said anything about THAT!?! 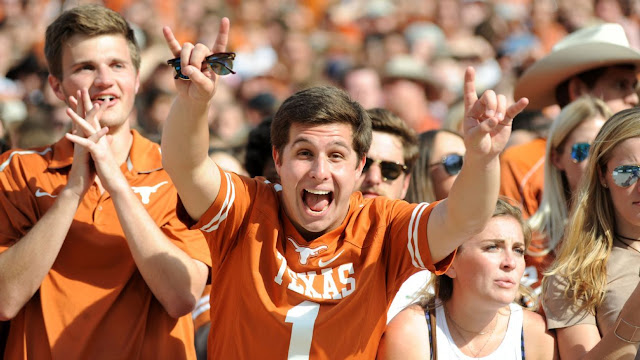 However, it's football - which, as we know, is apparently an adjunctive religion to Christianity, in the South and Midwest - anyone associated with football can do no wrong, and all inappropriate behavior is automatically absolved, in the name of football - so I guess it was okay? ;) LOL
Back to the concert, if I recall correctly, we got up early on a Saturday and stood in line at Ticketmaster inside the newly built Lexington Green (back in the old days, that's what you had to do lol) on the first day tickets went on sale  - and I believe they sold out within a few hours? 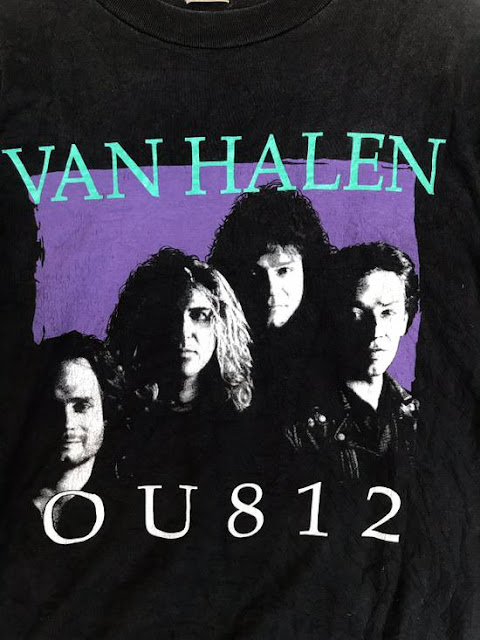 (Yup - I had this T-shirt for a very long time afterwards - I wore it out.  It had holes in it by the time I "retired" it lol.)

In fact, here's a picture from that opening-tour concert (not mine) ... and believe it or not, I kinda remember this moment - during "Best of Both Worlds" ... if I recall correctly, they kind of conga-lined it across the stage, kinda matching each other, step for step - two steps to two beats with the left, two for the right, etc. 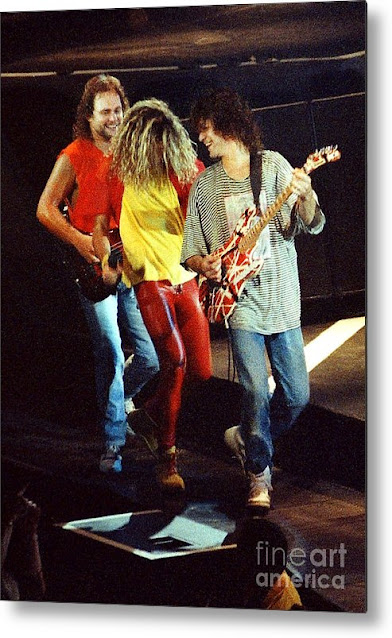 Now, why I remember that, I don't know  lol.
I also remember how Eddie always had a big smile on his face, when playing - absolute joy and in his element, playing the guitar
But the best moment was, a friend of ours, Ryan, won tickets through our local radio station, WKQQ, to the first row - and and brought a inflatable lime green guitar (very similar to the pic below - mimicking Eddie's every move lol. 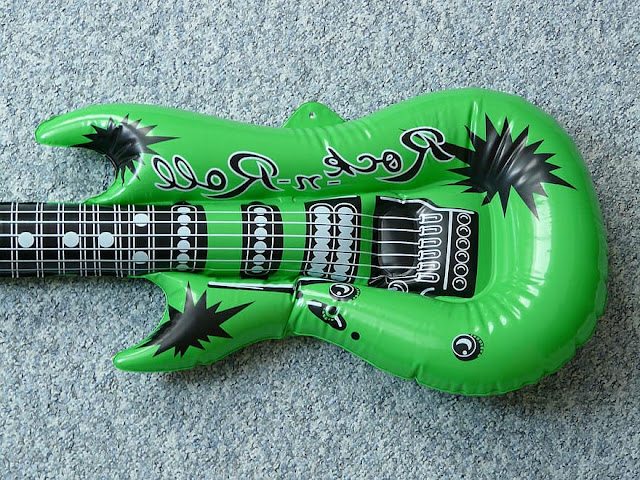 Eddie noticed - and he pulled Ryan up on stage - and Ryan got to "air guitar" with Eddie with that inflatable guitar - matching him move for move!
We were squealing and screaming, "OMG! Ryan's on stage with Eddie, with that ridiculous, inflatable lime green guitar! Hahaha! Woooooooo! Go Ryan, you ROCK!" LOL


I'm telling ya - Ryan had Eddie's move down pat - long before the video game of "Guitar Hero" was even thought of - and Ryan was the talk of the town, for months afterwards lol :)

(Except you could hardly tell who they were, because they both looked about 2 inches tall, from our seats lol - because although we weren't in Rupp's nosebleed seats, but we weren't on the floor, either - first mezzanine :)
Lastly, I just remembered this - I don't recall how it happened (because we didn't actually meet Van Halen) - it may have been Ryan got it for us - but my boyfriend, Ben, somehow ended up with Michael Anthony's guitar pic! :)

That was us - and that was Van Halen :)
This video would be my 2nd all-time favorite Van Halen song, because it shows off Eddie's versatility - especially when the song breaks and the tone drops, mid song (about timestamp 2:42), right before David Lee Roth starts talking instead of singing  - Eddie's guitar  starts "singing" for him,  soulfully.
From the album, "1984"  ... 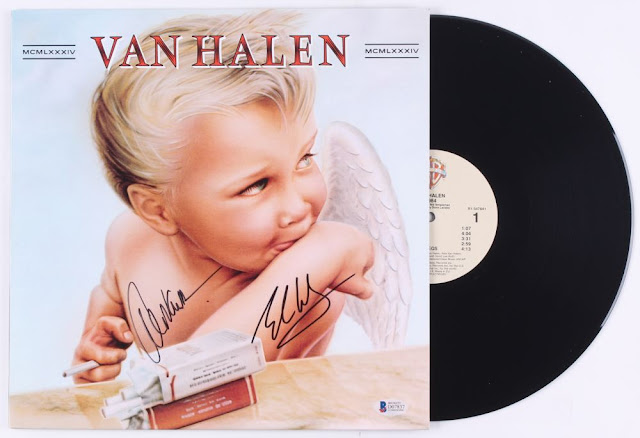 However, my all-time favorite Van Halen song is, of course, is the Pensacola Blue Angels' anthem, "Dreams" (Sammy Hagar now lead vocals) - which blasted on the radio all day, when the Blue Angels flew over, after the 2004/2005 hurricane season in Pensacola to boost morale.
It worked, of course - and I'll never forget that :)
RIP, Eddie - thanks for being my first rock concert, all the 80s fun, and for that Blue Angels anthem - *salute *  ;')
World turns black and white
Pictures in an empty room
Your love starts fallin down
Better change your tun, yeah

Run, run, run away
Like a train runnin off the track
Got the truth gets left behind
Falls between the cracks
Standing on broken dreams
Never losin' sight, ah
Spread your wings