So ... Remember When I Said It Appeared to Me That Putin had "Moon Fascies" ... 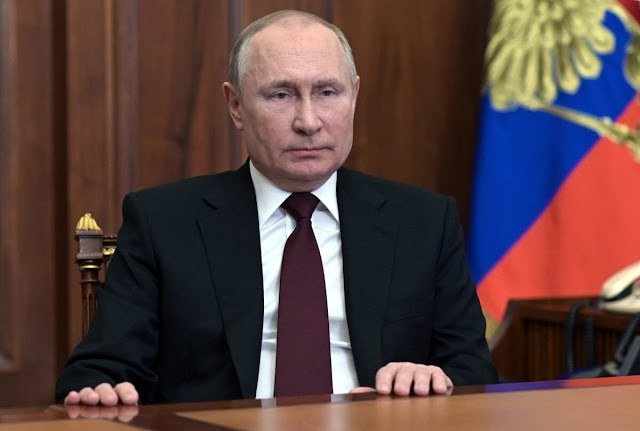 "So ... did anyone else think Putin looked especially pale and unusually bloated, in the face, in the "threat" video?

(In fact, that's why I called him a "bloated codfish" in my earlier post.)

He did to me - almost what is called "moon facies" in medical terminology - which although can result from several health conditions, can also form when a person has been on high-dose, corticosteroids (like prednisone) long term for a health condition with severe or chronic inflammation.

If so, that sure would explain a lot lol.

"The classified U.S. report says Putin seems to have re-emerged after undergoing treatment in April for advanced cancer, three U.S. intelligence leaders who have read the reports tell Newsweek."

Now -  unfortunately, Newsweek has increasingly become more of a rag and less reputable, over the past couple of years, trying to compete more with tabloid-looking, click-bait online publications -  and as always, always be wary of anyone who cites anonymous sources such as "3 US intelligence leaders said" without knowing who they are -  but it's interesting, to say the least ...
_____________________________
PS  - Otherwise, again - after today, I am turning off my RSS feed.
What this means is, if you use Blogger feed to view others' blogs (likely also affecting any blog "readers" as well). no more posts will appear - you'll need to come directly to my site to read my content from now on - sorry :(
By Chrysalis at June 02, 2022