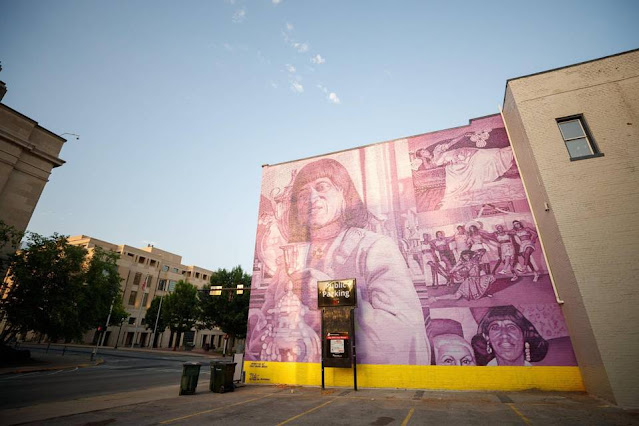 ... on the corner of Church Street and Limestone Street, painted by local artist, Gaia :) 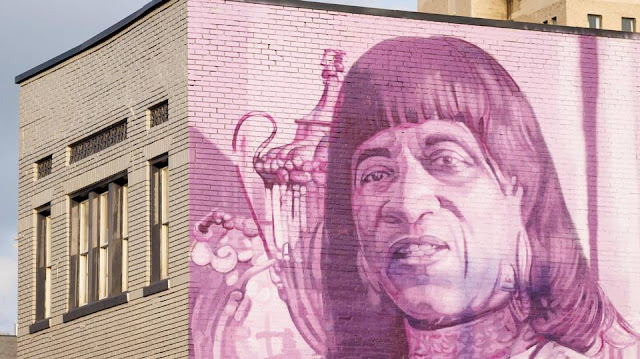 I have written about her a couple of times, most notably in this post from from November 17th, 2017, called "The Compassion of Sweet Evening Breeze - Angel of Good Samaritan Hospital."

Additionally, here's an very brief article about her and the mural in today's Lexington Herald Leader.

The short story is,  born in 1892, Sweet Evening Breeze/James Herndon (University of Kentucky link),  was abandoned by his uncle at Good Samaritan Hospital as a child - some say due to hermaphroditism, but documentation suggests it was actually after an eye injury his uncle couldn't pay for.  Thus, he was raised by hospital staff.

Much beloved, she took are of everyone  - including my grandparents - staying up all night with them and holding their hands, wiping their foreheads, changing their bedpans, reading the bible aloud, praying with and for them, and singing hymns to them.

In fact, my grandfather used to say: "Weren't no better soul, man OR woman, than Sweets."

Though privately adored by both hospital staff and patients, and Lexington itself - you didn't mention her in "polite society" - public circles of "good Christians" - only private conversation.

Which means, though she may have nursed and comforted you or your loved ones near or at death, if she passed you on the street - you didn't dare speak to her :(

And yet she continued to nurse and comfort these same people repeatedly, generations of racists and biggots anyway - simply because it was the right thing to do.

You think that's what Jesus would've done - not even speak to the people that nursed and comforted Lexington when in poor health?

In fact, Sweets behaved more like Jesus than most of y'all.

Like Belle Brezing - the red-haired, Lexington brothel madam with the heart of gold (whom "Belle Watley" from Gone With the Wind was based upon) - Sweet Evening Breeze/James Herndon was also a famously compassionate  and charitable social outlier, whom everyone knew and praised privately, but publicly refused to acknowledge or even speak to, when passed on the street.

Regardless, Sweets died quietly at Homestead Nursing Home in 1983 and has a very nice gravestone at Lexington Cemetery (which I once had a picture of), the funding for which is unknown.

Thus, we're just now allowing her legacy to finally come to public acknowledgment and tribute, despite everybody knowing for years.

I would encourage everyone to read not only the above local news article, but also my post about Sweet Evenin' Breeze/James Herndon - or "Sweets" as my as my grandparents lovingly called her, because there's a personal story about how she took care of them both when at Good Sam - my grandfather with appendicitis and my grandmother, after the birth of my mother, when my grandmother hemorrhaged and became anemic.

Conservative Trumper heads will explode - because the histories of neither Sweets NOR Belle Brezing support either their political narrative nor their "splitting" sense of morality, only focused on sexual activity as sin, ignoring virtually all other (and worse) types of sin.

This makes me so happy!

Now - tell me Belle Brezing's mural will be next, Gaia?  Lexington? ;)