Happy Father's Day! Things to Do Today, and Things You Might Want to Rethink Doing ;)

Spoiling my husband with breakfasts and gifts today from our fur babies :)

I just found this quote, which I really loved ... 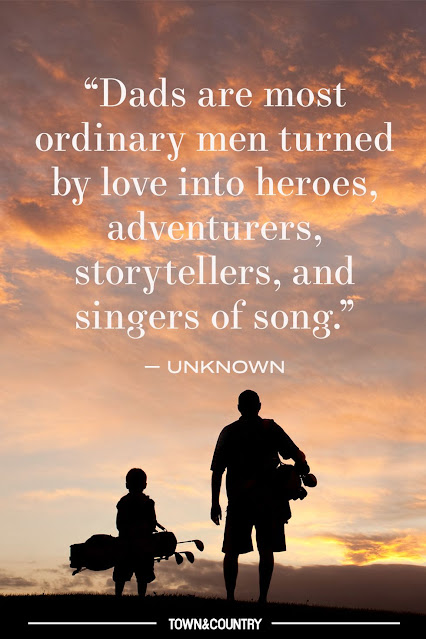 I know that this day, just like with moms on Mother's Day, is hard for some people, because their fathers have passed on, they weren't close to their fathers etc.

These feelings are important to acknowledge, so no "pretending" - but also, whether it's more appropriate to quietly validate these feelings internally to yourself, or seek external validation from others, depends on the situation -  because remember, others may have had different experiences.

But then after you're done acknowledging and validating your loss and grief, either because you don't/didn't have a good relationship or your father has passed, maybe try to:

1) Find a good man in your life and thank them for teaching you something, for loving you, for having your back  (and maybe do the same for a good woman in your life on Mother's Day :)

2)  If raised by one parent, maybe thank them on  both Mother's AND Father's Day, for being both for you.

3)  Reach out to someone else who had it worse - maybe someone who lost their father at a very young age, had an abusive father, or maybe they don't even know who their father is -  maybe even someone who wanted to be a father but wasn't able to, for whatever reason.

*4)  Find and focus on the good in your father, even if you didn't have the best relationship, and even it's just one thing - what you inherited or he taught you, even if by default - or find the good in someone else who has either been a father figure to you, a good father in general, or just good man in your life :)

As mentioned a few posts below, most people don't fit neatly into one box or the other, either all good or all bad - and the same is true for women as mothers - shall we try to remember that today? :)

For example, there are a LOT of not-so-great things I could say about my Dad, but just for today, here are 3 good things about my Dad:

1)  He was a really good dancer and taught  my sister and I how to dance :)

2)  Though both my parents were mostly very serious and stressed, on rare occasions, my Dad could be funny.  Sometimes corny dad jokes, but usually sarcastic one-liners, and once, he entertained us for an entire evening without power by candlelight, during the infamous tornado outbreak of 1974,  when hiding in the basement and scared sh*tless, by pretending to call President Ford, the Queen, and other famous people on the dead phone, in various goofy voices and accents.  Thus, he is the parent to credit (or blame), or the "father" of both my goofy voices/accents, as well as my one-liner zingers :)

3)  Gave me the best piece of advice a socially anxious/shy person like me ever received: "If you're afraid you don't have much to contribute to a conversation or  don't know what to say, ask the other person more about themselves, and mean it -  it gets you outside of your head and gives you more material to talk about, because most people love to talk about themselves.  It also gives you time to think of what to say next. "  :)

Things you might want to think about NOT doing today:

1)   Probably not talk about where your dad effed up, directly TO your dad, to your mother, and maybe even to some of your siblings (siblings often have their own experiences with a parent, separate from yours) lol.

Father's Day may not be the best time to try to find resolution or validation, right?

Instead, consider it truce time.

2)  Probably not make today a parenting competition, either between you and your spouse,  between your own parents, or between men and women in general.

3)  Similarly, probably not a good idea to turn today into either gender-equity battle or  gender competition, or keeping a tally on who receives the most  positive attention the rest of the time, men or women lol.

4) Probably not treat today like it's your birthday -  either as a father yourself, or as a child to your father, perhaps because what you hoped for didn't happen today - either way, remember, today is not just about you.

Remember, you also have a father, who had a father, with their own experiences - plus your friends and family have fathers, too, with their own experiences and feelings about that.
Even if you feel you didn't have a good father, try to remember that other people feel they did - so at least for one day, maybe let's put our railings against an overly white-male patriarchal society on hold, for a day? lol

On that note of not creating parenting competition, gender-equity battles, or women's rights or men's rights debates on Father's Day -  which we typically see a lot of on social media today, on both sides - doing these things on a day like today is NOT going to win any points for your side, either for women's rights OR men's rights.

It just makes you look so consumed by politics and gender issues that you can't see the forest for the trees, and, well, selfish.

Also, if you believe that more attention should be paid in the direction of either this gender or that one,  how is it going to help for you to focus even more attention on the gender you think needs less attention spending this day bitching about them? lol

So just for today, after you're done acknowledging and validating your losses, either your father or the father you never had or knew - how about let's try to find and focus on the the good in the  parent you lost or the parent you're conflicted about -  or even a just a good representative father in your life :)

In other words, let's make days like Mother's Day and Father's Day less about acknowledging pain, and more about what it's supposed to be about -  gratitude.

How about we make a concerted effort to ensure today is a good day, for not just us, but the people around us - a good day for gratitude :)