Parkette Drive-In: So Remember When I Wrote About Our Increasingly Aggressive, Trumpified Experiences at a Lexington Landmark Diner? (Link Below) 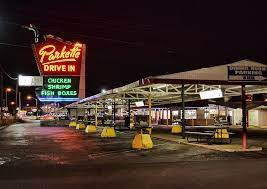 I didn't say the name, at the time, but now that it's closed - it was Parkette Diner and Drive-In, a Lexington landmark for 70 years, one of the last of its kind, an old 50s style drive-in and diner.

It just closed yesterday, without warning, due to its lease not being renewed.  The employees showed up and couldn't get in.

This is actually the second article on the subject from the Lexington Herald Leader, when people asked why (white Trumper people? lol)

So the official reason given, though the business was profitable even through COVID, they lost business and money in 2022, which they're blaming on inflation and gas prices.

Note the LHL's article says the business admits that they were still doing well until 2022, they past few months.

Okay, maybe it's inflation - but despite being a diner, it's mostly known as a Drive-In, which means people ate in their cars, so we can't blame COVID too much - and you said you were doing well until 2022 despite COVID so?

Or maybe it was mocking your customers wearing masks, the loud-mouthed Karen manager openly making racist comments and denouncing liberals (who refused to argue back with you and still tipped you 25%) in a town that is 63% blue?

(Though it feels like less, my fellow liberals here are so weak.)

I can't speak for everyone, but we used to eat there every Friday until the final aggressive, rude politically driven experience, the last of several straws, letting us know mask-wearers and liberals weren't welcome there.

We stopped eating there, every Friday, after that final experience, which was the final straw - and I bet we weren't alone.

You can blame inflation, gas prices, and Biden all you want, and maybe that played a part - but the fact is, you can't mock your customers for wearing masks, allow your loud-mouthed Karen manager openly make racist statements and denounce liberals (though we never argued back), and implement sudden new policies when you suspect your customers are liberals - and then when they still tip you 25%, complain they didn't round up to the next dollar  - and expect your business to do well.

Likely, your aggressive Trump politics and mocking your liberal customers in a city that is 63% blue didn't help you, now didn't it?  (Though it feels like less than 63% because the liberals here are weak.)

You cannot run a business and expect to do well when you aggressively serve politics along with your food and are rude to/mock your customers that disagree with you, or you even think they do, for wearing a mask.

It is sad, but I grieved its loss with that that last experience - the Parkette we once knew died in about 2016.

And the saddest thing about it is that they're going to walk away blaming inflation and Biden, instead of themselves :(