January 6th Hearings: Will They Matter? 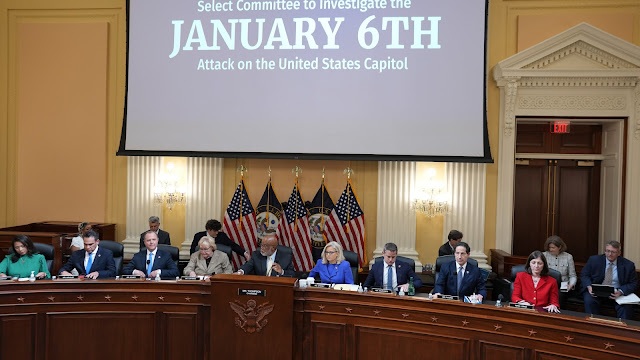 I hate to say this, but I'm not confident that even if we had smoking-gun evidence that Trump was guilty, anything would be done or his voters would care - which is why I won't be saying much about hearings.

Not trying to be negative, but I accepted a long time ago that his voters have a cult mentality or extremely dysfunctional-family mentality - meaning that he could even murder someone and they'd justify it as the will of God or pretend it didn't happen and scapegoat any naysayers.

I guess when you grow up in an extremely dysfunctional family and have witnessed this mindset - throw in charismatic evangelical belief and "God said" for authority - you learn to accept that you cannot change this mindset, even if you had smoking-gun evidence - because it is too tied up in belief, as well as their psyche, about what it means about themselves for going along with it.

People say "have faith"  - do they mean in our justice system, our Congress, God or-?

Because if they mean Congress, HA, dohkay.

If they mean our justice system, I lost faith in that a long time ago - it's too politically biased and favors rich white people too much.

And do I have faith in God - but he doesn't seem overly concerned with justice.

Christ asks us to seek justice, but he never promised to intervene  with justice, how arrogant would I have to be to believe that I could change the outcome of something as big as this with a simple prayer?

Also, I've noticed that "the devil's own" often slip through the cracks of justice repeatedly.

I say "the devil's own" facetiously - well, sort of lol.

I don't believe "the devil made them do it" type of stuff - but I DO find it odd that certain people - like mass shooters like the Uvalde shooter, and people like Trump - seem to get past all the roadblocks and barriers, wiggle out of all social or legal restraints and justice itself, and somehow are allowed to walk free and run amuck.

I'm sure the truth will come out eventually, it always does, but we have to accept that this may not be in our lifetime

So how to live right now, in a society that allows things like this to happen, does nothing, and therefore ensures it to likely happen again?

Well, you can call your congressional representatives, petition, and peacefully protest - and still, that might not matter, but at least you tried.

You could get depressed over the powerlessness, I guess, which would be understandable.

Many had a taste of that, perhaps for the first time ever in life, during COVID lockdowns.

As for me, I've lived my life basically in powerlessness, and people of color even more - and yet after acknowledging that powerlessness, perhaps a day or two of feeling it, then we all still somehow find a way to find our joy, in the end :)

So it's not that I don't care about the hearings - it's just that I think the odds are against anything getting done because of political bias - I think it's likely Trump will wriggle out of this one, too.

And yet we still have to find our joy in spite of them - because to live in fear of them is not only no way to live, but it means they've won already, at least with you personally.

And I DO believe is what Liz Cheney said:

"At some point, Trump will be gone - but your dishonor will remain."

Probably after Trump is gone, maybe even many of us our gone, the truth will be accepted and those still alive with become social pariahs  who no one believes a word of - but again, not anytime soon - society evolves very slowly, and we've had a setback, almost a reversal in evolution.

Who would've thought I would ever agree with a Cheney on anything? :)