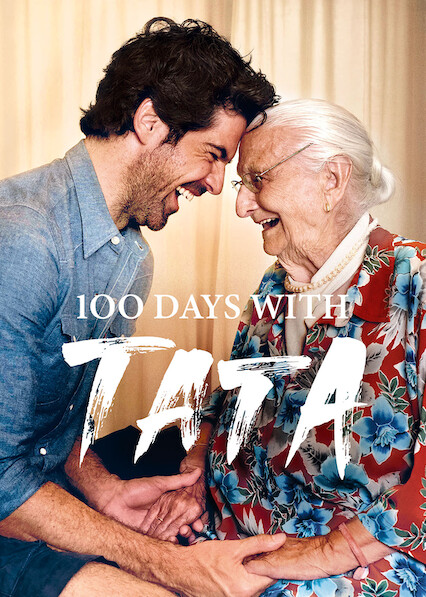 Sometimes you find a little hidden gem on Netflix - and this one, I would definitely recommend  :)

It's in Castilian Spanish, but has English subtitles for those who don't speak the language (or are learning, like me) - but don't let that stop you - you will get the bond and the jokes even without them :)

Spanish film star, Miguel Angel Munoz spent 100 days of COVID lockdown with "Tata" in his small apartment in Madrid with his great aunt or "tia abuela,"  who took care of him while his parents worked, while he was growing up - and she became an Instagram superstar in all Spanish-speaking countries, considered the oldest influencer at 95 years old :)

A commenter suggested they title their daily postings, "Cuaren-tata"  (like "Quaren-tata - a combination of "quarantine" and "Tata" lol.

She became so popular in Spain that many famous Spanish celebrities Zoomed her (she was most emotional with a Zoom call from Spanish gypsy singer, Lolita Flores :)

She does get mad once, because she moved all of her things into Miguel's small Madrid apartment, but she refuses to let him get rid of anything - pictures of him, which she insisted he hang (he says he tires of looking at himself all over the wall) and even a small stone, which she can't remember the story of why she kept it lol.

He wants to throw out a broken picture frame, but she won't do it and gets mad, but later quickly apologizes and they're okay :)

You've got to understand, though, this woman survived Franco fascism for 40 years, struggling even before that - imagine if the Great Depression had gone on for 40+ years - you'd want to hold on to everything, too ;)

At first, I was confused about what he calls her - I thought Tata was perhaps just a nickname for her that means nothing, like a child would call someone, because in Spanish, "Tata" means "Dad" or "Daddy" (or a person of authority) and in slang, it means "breast" lol.

Perhaps that is the case, it's just a nickname - but then I did a little more digging and similar to the slang, the word can mean "nursemaid" or "nanny?"

Not sure, but regardless, she is an absolute delight, radiating positivity  - and their bond is incredible to watch :)

It appears that he actually began the documentary before COVID began, having her create a list of things she still wanted to do in life (that's what the bowl and pieces of paper are about, they pull one from them), so initially, he takes her to her hometown of Merida, a drive on the coast - and then COVID hits and they're locked down together (Miguel's choice).

In addition to their little skits, they always take a moment during their posts to light a candle and pray for those struggling or who have died from COVID, as well as they both go outside on his balcony nightly to applaud the healthcare workers and first responders on the front line of COVID during that first wave, just as we did here :)

I hope that we remember that first wave, and not just the difficulties, but the positives like that - how around the world, we all stood outside on our balconies and yards and applauded the healthcare workers and first responders every night:)

Apparently, she is still alive at 97 years old (?), after surviving the pandemic without contracting COVID, thanks to Miguel's diligent care and precautions, and is still going strong :)