So, after watching the first three episodes of an extremely intense, Helen-McCrory-less, and thus nearly humorless, final season of "Peaky Blinders," I needed a break lol.

Thus,,"Evil," Season 3, drops on Paramount tonight - also dark and sometimes intense, but in a different way - and also frequently hilarious.

I have sung the praises of this show from the beginning, including in my post here, as the best show you're not watching - but it's gotten a loyal following since.

And remember, I loved The X-files from the first season and said the same thing with that show, back then  - way back when it was originally in the "death slot" for network TV - Friday night, 10 p.m., on Fox (with an parental advisory) - which is where network TV used to put any shows whose pilot barely made it with audiences in market pretesting - back when people thought I was weird for liking the show, before it caught fire (which actually took about three years) lol.

I felt that it would take time, and it had a few bugs to work out, but once it found its stride, I predicted once people caught on, it could a sleeper hit and create a whole new genre - and three years later, it finally did - and now it's a classic that other shows have tried to emulate - so thank you, thank you, I was right about that one  ;)

(No crystal ball, I just know screenwriting and audience trends ;)

Well, I should said I actually liked it better before they became almost exclusively about government/alien-only stuff and just investigated anything unexplained.)

In other words, I'm saying the same of this show - if it follows the same pattern as the X-Files, working out its bugs, hitting its stride as far as quality rather than running out of ideas, and more people start watching.

HOWEVER - The X-Files only had to compete with other shows on three other networks - though Evil started out on CBS, it's not on Paramount, so we still have those 3 networks to compete with - PLUS - a plethora of streaming-network shows -  so we shall see.

How to describe the show "Evil" to someone?

So a priest-in-training, a lapsed-Catholic, agnostic, forensic psychologist, and a lapsed-Muslim, atheist, IT guru, walk into a Satanic bar ...  lol

No, just kidding - kind of.

Maybe - I don't know, though - The X-Files was already pretty pro-feminist, wasn't it?

Scully was the calm, super-brainiac, voice of reason to Mulder's - erm - conclusion-jumping excitability and instability, after all.

So I guess I would describe it as ...

An X-Files for the 21st century, only instead of the FBI investigating, it's the Catholic Church and secular-psychologists, focusing on the intersection between science and spirituality and their definitions of evil -  an intelligent person's exploration of so-called unexplained phenomena, from the perspectives of both faith and science.

Despite being able to debunk most phenomena through technology and psychology, they also discover a few cases in which they find the lines between science and faith blurred - meaning perhaps they're not mutually exclusive - it's possible both manipulative science/technology tricks AND unexplained spiritual phenomena are occurring simultaneously - leaving them to question, in such cases, if spirituality is simply science we don't yet understand.

Well, that's the best that I, the Queen of Written Verbosity, can do in a nutshell lol.

Interestingly, it's written by married couple, Robert and Michelle King - Robert, a devout Catholic, and Michelle, who is Jewish, but is non-practicing/secular and agnostic.

Thus, this show is a meeting in the middle, a meeting of minds - one "side" allowing for the possibility of the other 's perspective  :) 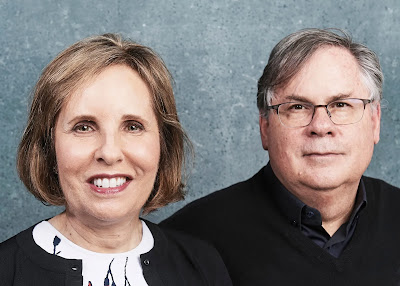 The actual premise is that priest-in-training (now a full priest), David Acosta (Mike Colter), witnesses Dr. Kristin Bouchard (Katja Herbers) testify in court as the court-appointed forensic psychologist for the  DA and on the DA's payroll, and asks her to instead become an investigator for the Catholic Church.

She initially turns him down, being a lapsed Catholic and agnostic -  but she essentially lost her job, after the person she was testifying against -  a serial killer -  got off by manipulating the judge that he is now an evangelical Christian and thus a changed man (with the help of Leland - more on him below).

David was in court because he suspects the man to be possessed and would like to interview him further on behalf of the church.

Kristin does NOT believe this - but she does need a job now.

David chose her because she's a super smart researcher of the human psyche, and he believes the church needs a skeptic to help rule out fake cases of possession, considering the church's backlogs of requests.

They also employ Ben Shakir (Aasif Mandvi), a lapsed Muslim, to debunk any fake claims, ruling them out via technological investigation.

(By the way, kudos to the director(s) - little things like the lighting placed above David's head in this shot ;)

The three of them are able to debunk most claims - but then there are those left unexplained, or that may actually be a combination of both sleight-of-hand technology AND evil spiritual influence - leaving the agnostic, Kristin, and the atheist, Ben,  to at least allow the possibility of spiritual influence in at least a few of the cases.

Plus the more they investigate, the more weird, negative stuff happens in their own personal lives, which not only defies explanation, but is way outside of their control spiritually - possibly even outside the church's known methods for how to deal with evil spiritual energy.

The dark side is particularly after Kristin and her family, because though she doesn't fully believe anyone is actually possessed,  she's become the biggest challenge legally for those being influenced to do evil, because she's onto them like white on rice, helping them be brought to justice or mental wards - however, Leland et al believes they can "turn her to the dark side," using her unbelief, as a method of stopping her do-gooding.

This nearly works, when Kristin makes a choice to deal with the serial killer - who is now stalking her and her family -  in an understandably human way -  but not a due-process-of-law or God-condoned way, shall we say - which places her dangerously on the wrong moral side, while thinking she was doing right, to keep herself, her family, and society at large safe.

You have to watch the show to see what I mean/find out what happens ;)

These three lead characters are excellent -  but it's Christine Lahti as Sheryl, Kristin's "successfully turned" mother, now-Satanic, secretly working against Kristin -  along with Michael Emerson as Dr. Leland Townsend (as long as he doesn't hurt her family), also a clinical psychologist and Kristin's nemesis, as well as a demon-possessed Satanist - that steal the show.  Both performances are Emmy material. 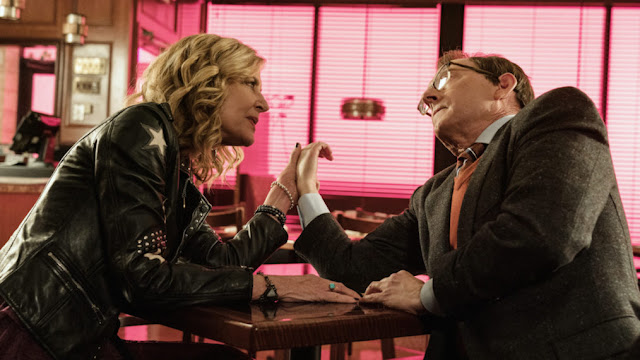 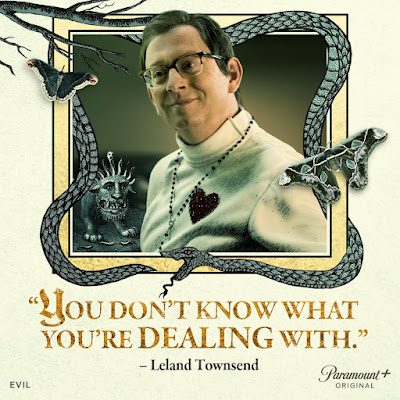 But alas, never fear - in Season 2, we were introduced to the only character that scares the crap out of Leland - bad-ass nun, Sister Andrea, played by Canadian SCTV alum comedian  and "My Big Fat Greek Wedding" costar, Andrew Martin (LOVE her). 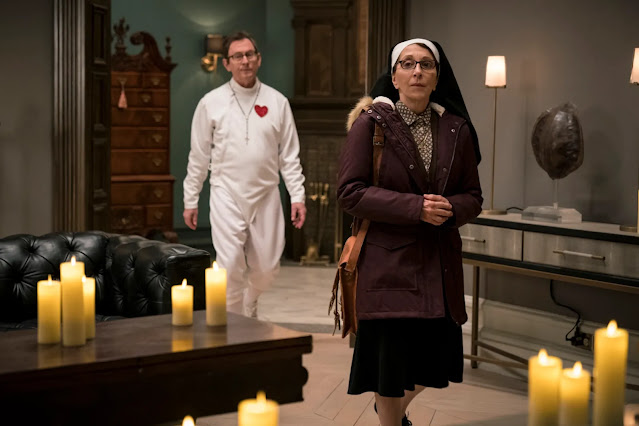 In fact, she's such a tough, smart, spiritually-sensitive God warrior that she's the only person alive that truly scares Leland -  who doesn't respond to ordinary methods of exorcism -  both because he really doesn't want to become unpossessed and because he's done so much evil for Satan that he's inhabited by an extremely powerful demon, who can't be exorcised easily with known methods.

Sister Andrea knows this already, but she's done battle with actual unembodied demons before, and knows that sometimes, with lack of  spiritual power or knowledge, it becomes a matter of outsmarting them to keep them at bay.

For example, when Leland entered her convent, she exchanged priest-blessed holy water for a mixture of chemical cleaning products to create a burning acid, which burns Lelands hands, and he runs screaming from the convent.

This keeps Leland at bay temporarily, messing with his head - he begins to believe his power is weakening and that simple methods such as faith and holy water can actually work on him now  - hehehe :)

Only later does he figure out that Sister Andrea had switched the Holy Water for cleaning chemicals and confronts Sister Andrea about it, to which she just smiles saying, "Well, it worked, didn't it?"

He says, "The Catholic church should really value their women more, the work of their nuns more, that was brilliant."

We shall see what happens in Season 3 - like The X-Files, will it finally hit its stride and find its following?  ;)