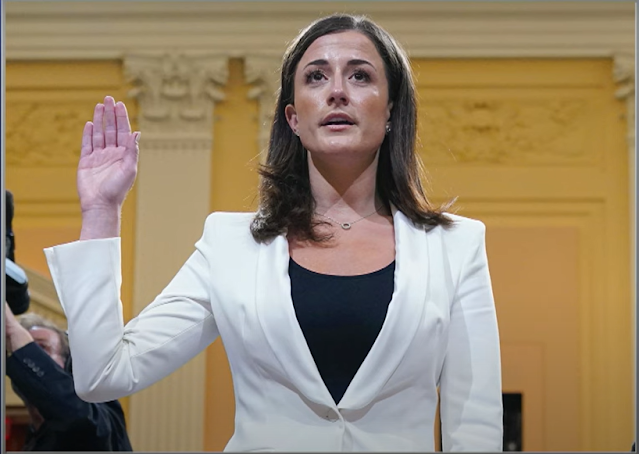 Whether coincidence, or Cassidy just said "Oh, hell, no," after that  extra slap in the face of Roe Vs. Wade overturn, on top of everything else she'd seen, doesn't matter - emergency committee session regardless, and  ...

Trump repeatedly throwing food during temper tantrums, foreknowledge of armed insurrection and likelihood of violence, wanted to lower security scanning for the crowds -  demanding to join the insurrection himself and trying to grab the steering wheel from the secret-service agent driver -  assaulting that secret-service agent by trying to choke him (that agent being present in the courtroom), witness tampering - the kind of stuff we already knew was going on/went on with Trump, we just wanted someone to be brave enough to confirm it under oath.

Journalists cannot help but smirk, late-night talk show hosts went nuts - this is what we've all been waiting for.

If true, Brava, Cassidy, and thank you - you are not just the bravest woman in America, you are the bravest person in America - for doing for conscience and country what the men  around you were too afraid to do/could not.

Because we women know there are several forms of bravery - and women are much more accustomed regularly making sacrifices, every day  - their careers, even their own safety  - to protect and safeguard what's most important - their children, the truth, and now, democracy itself?  :)

Of course, the mountains of damning evidence and testimony at this trial should mean the Justice Department investigates and files charges - and yet still, will that matter?