Comedian Chelsea Handler Asks the GOP to Rethink Use of the Term "Pro-Life" - GOP Hypocrisy on Federal Mandates for Abortion VS. Guns (School Shootings),

Along the same lines I mentioned in my last post, the irony (and hypocrisy) of the Republican Party supposedly being the party of small federal government, but in reality, cherry-picking what they want the federal government to enforce in our private lives  - including the "right" to own and use an AR-15, the weapon of choice for mass shooters of school children -  I give you comedian/former late-night talk show host, Chelsea Handler, filling in for Jimmy Kimmel while on vacation :)

Seriously - I've mentioned my own position on abortion below, which in an oversimplified nutshell is "Pro-Choice, but it depends" - on the circumstances and on who's paying for it, public or private money -  due to the potential for abuse by either government agencies themselves along racial lines or the clients themselves" ...

... but at least one is a humane surgical procedure VS. the terrorization and murder of innocent ex-uteri school children with a weapon that shouldn't even be in civilian hands at all?!?

She also included some great signs found during the protests: 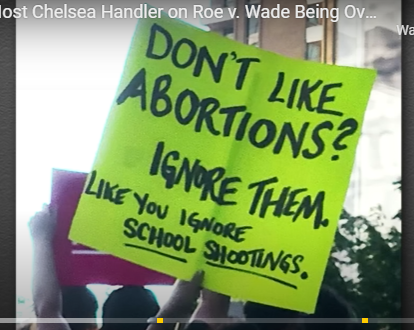 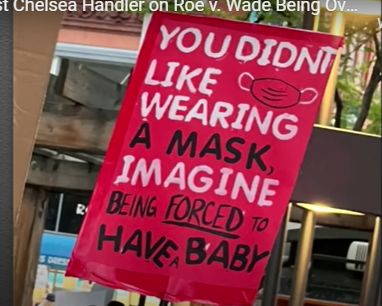 "You didn't like wearing masks - imagine being forced to have a baby." 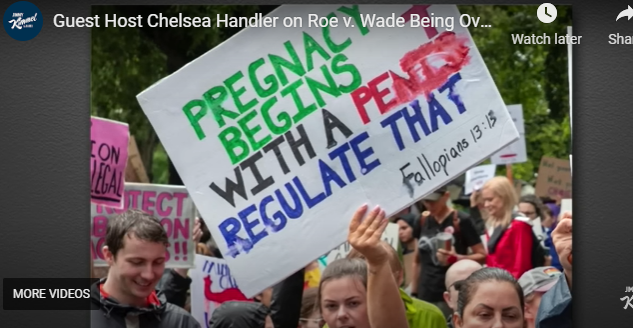