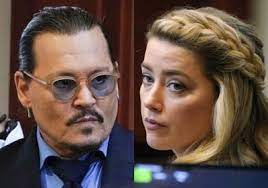 Johnny had the better case, being able to definitively prove that his firing from the Pirates of the Caribbean franchise was a direct result of her defamation of him  - and as mentioned in a below post, in order to win a defamation case in America, you must be able to prove that you suffered either violence or loss of income as a direct result of being defamed - and Johnny was able to prove the latter, loss of employment/income, without a shadow of the doubt, from day one.

And despite the clear smearing of Amber on YouTube and by the press, I still think what I've always thought - that their relationship was toxic, they brought out the worst in each other -  and that they can't seem to stop  vindictively punishing each other, sucking the rest of us into their battles.

Neither of them walked away looking like innocent victims, IMO -  they both lied, they both tried to manipulate the court, they both used drugs/drank too much, they both became overly aggressive and physical or verbally abusive with each other - in fact, they defamed themselves, in the end, IMO.

I know they both have better sides, which at one time, they must've seen in each other to have fallen in love.

I hope we see those better sides of them both again -  when/if they can stay away from each other and stop poisoning the well against each other and just let it go.

Until such time that we can see those better sides, I, for one,  hope they go away entirely until they do, at least for a while lol.

Because honestly, their claims against each other were so bizarre and they've created such drama together, clearly hoping public smearing of the other one would affect the outcome -  so I wouldn't hire either of them, at this point, I swear I wouldn't lol.

Nevertheless,  here's to hoping they are finally able to move on and that we see those "better sides" of them both,  real soon  :)