After Trump Announced His "Total Authority" With Reopening, Now Tells State Governors It's Their Decision ;)

Just 3 days after Trump announced at the WH press conference that "The President of the United States calls the shots" and had "total authority" to decide how and when lock-downs would end ... 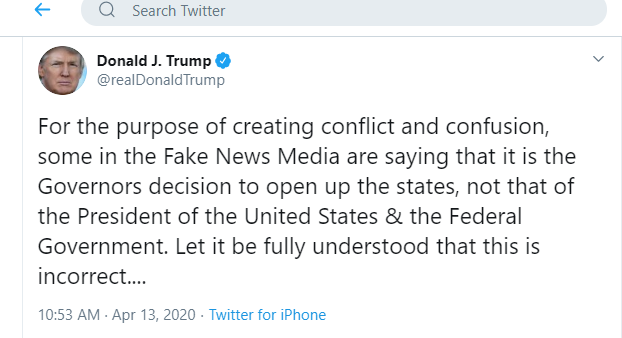 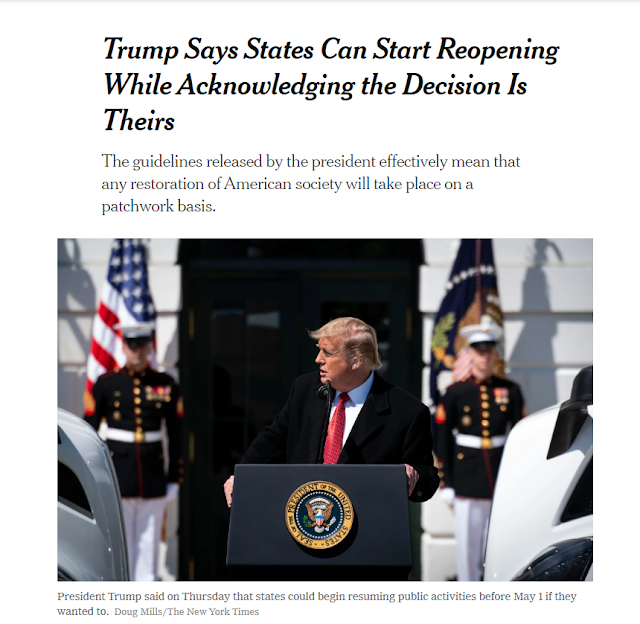 “You’re going to call your own shots ... you’re going to be calling the shots. We’ll be standing right alongside of you, and we’re going to get our country open and get it working. People want to get working.”

Apparently, not so "fake news" after all, hm?

More than 3 years in, and the man still has no clue how any of this works or what's in our constitution, nor does he care to learn lol.

So what happened to cause this 180?

It was likely 3 things:

1) His aggregated poll numbers fell to their lowest yet, this week.


2) His own Republican governors who previously supported him damn near revolted.

As for me, I don't really care who calls the shots, as long as the plan is sensible and safe - and Trump's plan to reopen this soon just - wasn't.

Not to mention, it irked me that Trump moved so slowly with testing and providing federal backup to the states - he essentially left all the decision-making and rules to the governors to do all the dirty work, while he sat back and started a bidding war from the states for help - then tried to step in later and undo them all for nothing but his own stake-holding greed in corporate shares, though we weren't ready yet and didn't have enough testing.

However, isn't the obvious hypocrisy amazing?

(Yet they curiously don't bother to explain this 180 and keep pretending they've always felt this way ;)


As for us, Kentucky has entered into a coalition with Indiana and Ohio governors for a plan to reopen, since our three states do much interstate trade, with Minnesota, Michigan, and Wisconsin in the works to join - but no openings yet yet - at least a few more weeks - and we probably will be behind Ohio's openings.

As I understand it, internal businesses within the state can be opened by that governor, but any that require interstate trade must be signed off on by the other governors in the coalition.

Regardless, we're happy with this plan - because we love our governor and trust him, he's super smart with heart - his early adoption of social restrictions has saved our state the same fate as those surrounding us :)

PS - I'm loving the British discussion, I just viewed, about who has the power here in America, as if they know more than we do about the U.S. constitution and former U.S. acts passed during military crisis or war time, most of which were later rescinded lol.

I would never even dream that I could speak with authority on how U.K.'s government works, not having lived there or studied their history in detail, but then I'm not very arrogant.

But who can, really? The U.K. has no written constitution to refer to lol.

They have no clue what they're talking about, but imagine they do.  I won't comment (I rarely comment anywhere), but I know they're reading me, so I'll just say this from here  - - please continue,  Brits, it amuses us - thanks for the unintentional giggle :)

In fact, I have yet to see even one prediction they've made, at that site, ever come true - and yet they seem to fail to recognize their prognostication-power track record is like 0:1000, at this point lol.

And yet they just roll over their failed predictions as if they never made them, in favor of the next crazy conspiracy lol.

See, this is what happens when you trust Breitbart, Twitter, and your own imagination as news sources, relying on them as your go-to source for U.S. constitutional interpretation, especially if you're British - you embarrass yourselves :)

Perhaps you'd have better prognostication powers or blind luck at least worrying about who has power in your own country as Boris recovers?