Draw Your Own Conclusions ...

... and I'm talking to those capable of critical evaluation and independent thought, who don't drink every drop of their party's Kool-Aid in blind faith.

Okay, give me some credit - I have thus far been pretty good about giving the benefit of the doubt to our leaders as doing the best they can during chaos - local, state, and even Trump - because there was no guidebook precedent for dealing with COVID-19.

However - erm - what make you of this, pray tell? 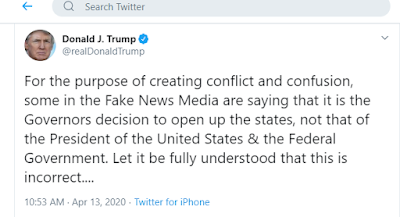 Lololol - draw your own conclusions.

So I'll just add that it's ironic that Republicans are supposed to be the party of small federal government, and state power trumps federal, isn't it?

Which way is it, Republicans?

State government - as ordered by our governors (which include Republican governors, mind you) - or the federal government - as ordered by the apparently omnipresent, omniscient, master of the universe and chosen one, Trump (despite what the constitution says) - who has hinted he is toying with the idea of beginning business openings again this week?

And the press isn't confusing us - you guys are, with what comes out of your mouths one minute versus the next lol.

One minute we listen to our governors, then next we don't - I can't keep up.

Make up your minds -  you guys give are giving us whiplash up in here lol.

PS - Some Dem state governors have just begun a coalition to determine a protocol for a slow roll back of precautions, completely ignoring Trump, because they feel that it is much too soon.

(I would agree - I mean, NY just surpassed Italy with deaths the day before yesterday!?! Helllooooooooo?)

Hehehe - I love it -  Dems are borrowing and using the old Republican "state power vs. fed power " playbook against them, a popular constitutional tactic employed by the Old South Confederacy and Republican Party since the civil rights movement  - ya gotta snicker at the cleverness of doing so   :)