The light show - coordinated to Tom Petty's "I Won't Back Down" -will be streamed live every night at 9 p.m. for one week :)

(The Lexington City Center and WKQQ ask you please not attend in person due to social restrictions - please stream from home).

LOVE this song for sentimental reasons anyway - this was my anthem during the hurricanes in Florida and everything that came after, to include the recession -  2004 to 2012.

Now, it's officially dedicated to healthcare workers and first responders in Lexington :)

(I'd like to think they would, having to contend with social-restriction protesters, too, but I'm not sure where they stand on that - so I'll just tack him on myself lol)

And can I just add pet first healthcare/first responders?

They responded with Snuggy, way ahead of the curve, with masks and gloves weeks ago - and were wonderful :)

Lyrics - just in case you want to sing along :)

Hey, baby, there ain't no easy way out
Hey, I will stand my ground and I won't back down

Well, I know what's right, I got just one life
In a world that keeps on pushin' me around
But I stand my ground and I won't back down

Via his Twitter account, he shared a picture of his wife, Chastity -  who is an ER nurse at a local hospital - shouting out some personal props, love, and gratitude for his wife  :)

Aw, that is so sweet - but you do realize you've just blown your tough-as-nail hard-core rocker image cover, right, "TNT"? ;)

That's cool -  we ladies like it that you have a soft side :) 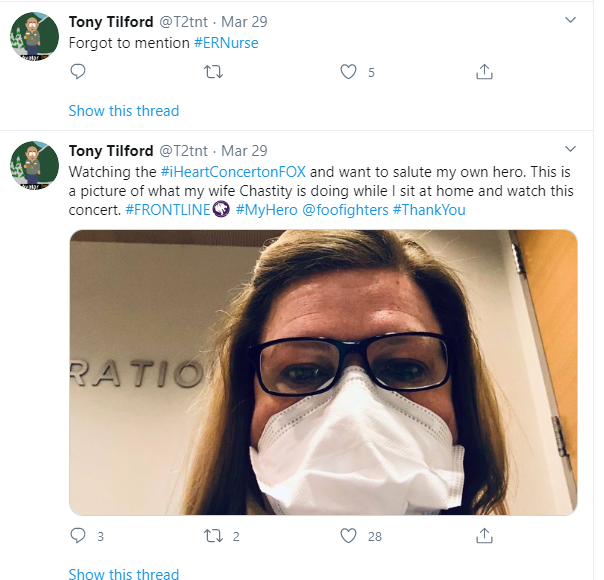