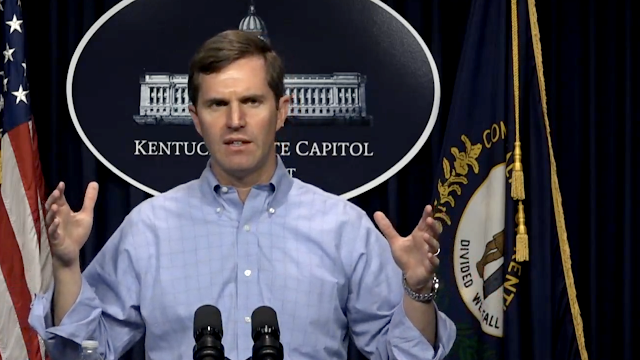 Drawing fire from the GOP for his 14-day quarantine plan for churches planning on defying the state's emergency social-distancing orders on Easter, the governor replied:


“This is the only way that we can ensure that your decision doesn’t kill somebody else ...What we’re asking you to do is not to harm other people. It’s to love your neighbor as yourself.”

Go Andy!  I LOVE my governor!

And don't think he won't do it, either, people - he's not afraid of the Twitter tirades.

People, you had other options, but you put him in a no-win situation he can't turn a blind eye to - what did you expect?

He is not 'targeting churches' - he has progressively restricted by number of people - gatherings of 200 or more, then 100, then 50, etc.

This is not political nor personal - you are misperceiving it that way due to your political/personal biases.

In fact, Andy's own son was scheduled for baptism tomorrow at  Beargrass Christian Church (Disciples of Christ - Louisville), but this has been canceled to comply with state emergency law.

Because that's what unselfish people do, that love their neighbors and themselves - they put the well-being of others ahead of themselves and their politics.

Heavenly father, please save these people from their own paranoia, ignorance, and ... themselves?

This is consequence for people who had other options, and yet chose to break emergency law and put others' health at known risk.


I thought we were all about "obeying the laws of the land?"

Or do we only quote that scripture when immigrants cross the border illegally and we're separating families and putting them in cages?

But when it's a law trying to protect each other from actual known and proven threat, then it's okay to break, just so you can have your own civil liberties, putting others at risk. Got it.