Well, As Long as We've Turned This Event Into Its Own Hollywood Reality Show With Teams, for Maximum Drama ...

I read a comment under that absurd Newsweek article that popped up as a "breaking news alert" on my screen, which I mentioned in the post below.

The person - who was a person of color from Alabama - said this didn't start out as a publicity stunt, but it's turned into one, nearly a full-on Reality TV show, complete with teams - and that it actually is now an election -  because of the Oscar's Governor's Board upcoming vote on the situation.

He suggested - tongue-in-cheek, of course - a new reality TV show, that includes Chris, Will, Kanye, and Joe Rogan, presided over by Judge Mathis!

My idea, replying to that, is that after that, then we could renew Celebrity Deathmatch from MTV, recreate them in claymation to fight in a ring, then shake hands later  ;) 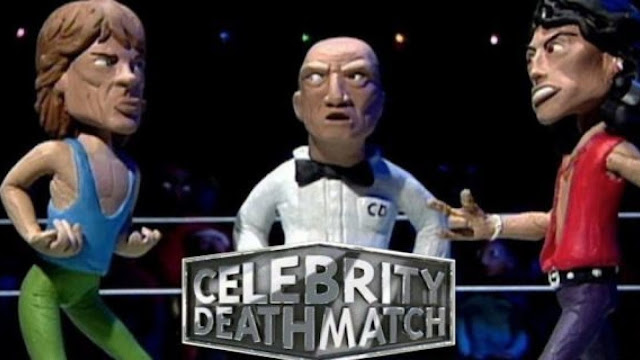 We could also invite Kanye and Pete - or Sean Penn or Alec Baldwin versus the paparazzi - or versus everybody?" lol
;)
(I'm TOTALLY joking - just stretching out the point about how absurdly Reality TV this situation has become - complete with teams now -  to the point of the absurd, to illustrate just how absurd it has actually become.
-OR-

We could all just grow up and take responsibility for this absurd, reality-TV culture we've ALL helped create and cheered on, instead of acting like we didn't and that we're appalled when we now elect nasty Reality-TV presidents or these things happen on live TV?

The above-mentioned commenter also had the idea of creating "Bad Boys IV" with Chris, Will, and Martin Lawrence."

Totally down for that ...

We were all having a great discussion - until the trolls arrived, who immediately went after the commenter that mentioned he was of color - reminding me of why I rarely comment anywhere.

Not wanting to leave this commenter on his own, I left a reply under the troll's main comment, then left ... 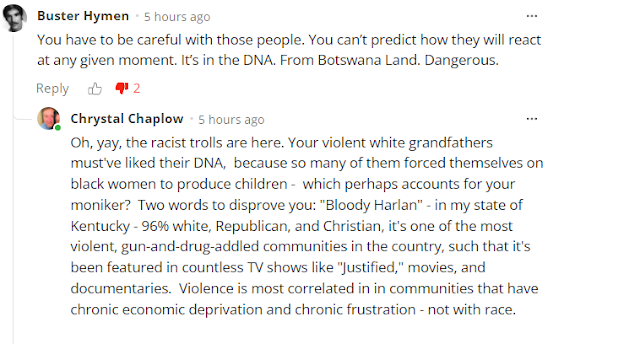 In case the print is too small to read, I'm not repeating the racist words about violence being in black DNA by someone called "Buster Hymen" ... but here was my reply:

"Oh, yay, the racist trolls are here. Your violent white grandfathers must've liked their DNA, because so many of them forced themselves on black women to produce children -  which perhaps accounts for your moniker? ;)

Two words to disprove you: "Bloody Harlan" - in my state of Kentucky - 96% white, Republican, and Christian, it's one of the most violent, gun-and-drug-addled communities in the country, such that it's been featured in countless TV shows like "Justified," movies, and documentaries. Violence is most correlated in in communities that have chronic economic deprivation and chronic frustration - not with race.

PS - And by the way, I'm a woman, "Dude" - a white woman - who isn't jumping on the curiously mostly white, white-fragility, male-and-female-Karen, "I'm-traumatized-just-from-watching" overreaction bandwagon to Will's overreaction,

I will also not be joining the "Loyal Brotherhood of Comedians" to support JUST Chris, which apparently is a union that rivals that of cops lol.