Clarification: Because of "Good Hair" ...

I know, I know, we're all sick to death of this - I, myself, took a break from all news the past couple of days because of it - but I was also asked a question and I want to clarify, which I'll do in a moment.

So "Good Hair" was a 2009 documentary about the hair of women of color, and the many methods they go through, often to make it appear more like European, like straightening, weaving, etc.

The film featured Sheila Bridges, a woman of color who suffers from alopecia, like an estimated 47% of women of color do.  Though it is an autoimmune disorder, it is hurried along and worsened via the current above methods. 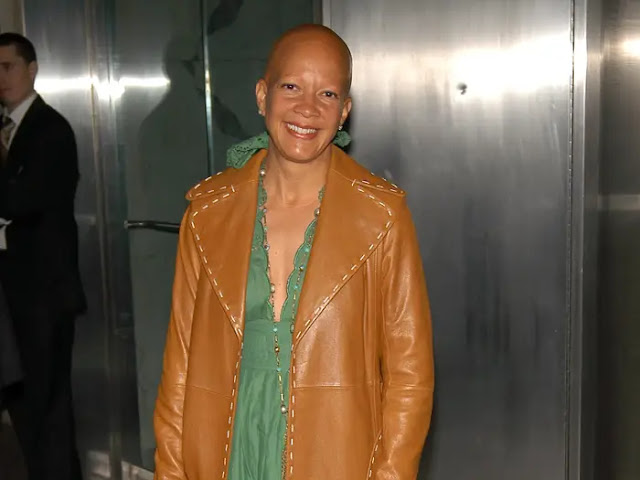 Thus, many women of color have chosen to stop torturing their hair and letting it go natural to avoid this issue.

Who made and narrated the film? 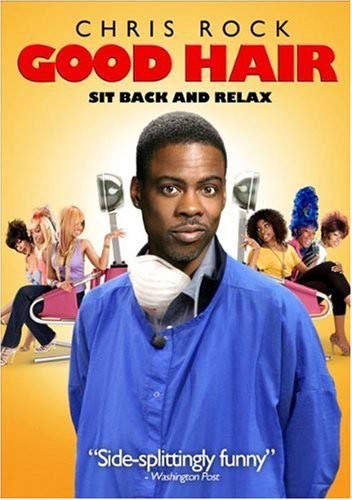 ... after his daughter asked him, "Daddy, why don't I have good hair?"

Even in her tiny, 4-year-old mind, our culture already had taught her to internalize the belief that white hair was was  "good" and hers was "bad"  :(

So when someone asked me "Why are you disappointed in Chris Rock, at all, he made a small joke, it was so tame in comparison to his usual? Plus he saved the Oscars after that debacle."

That's why I was also disappointed with Chris - because he should've known better :/

Even if he didn't know about Jada's personal struggle with alopecia, he knew about the (rising) condition itself in black women, rooted in racism pressure for women of color to look more white - because he did a documentary film on it.

(And he went off script to make it, says Oscars Product Will Packer.)

Jokes that perpetuate racism and misogyny, which sometimes even happen from people of color themselves, aren't "tame" or "small" - they may seem that way, but they have big cultural consequences - i.e., even Chris's own daughter, already at age 4 perceived her black hair was "bad" and white hair was good :(

I also believe that this is why it was mostly white people that became outraged by Will's reaction to Chris' "little joke" - because they don't get why the joke wasn't as small and harmless as it may have appeared - it's actually rooted in racism and misogyny - which Chris perpetuated himself.

Regardless, when I said that I still like both men and have empathy for both men, but I'm disappointed in both men to different levels -  this is what I meant.

Of course, I'm more disappointed in Will Smith for a variety of obvious reasons; violence, being unable to control his temper,  not thinking through the consequences of his actions and the effect his actions would have on everyone else around him and those watching, including children.

However, one of the most overlooked reasons for being disappointed in Will is that if hadn't slapped Chris,  the condemnation tarnish would've then just been on Chris Rock alone, for going off script to make a joke rooted in racism and misogyny, when he should've known better, after having done a film on it himself.

Now -  it is true that Chris's actions kept the show moving and may have saved the Oscars, and I'm not taking that away from him, and I DO  I commend him for that, as well as just as I commend him for not pressing charges and making a greater spectacle of this, and just handling this privately.

However, these are two separate issues - how Chris behaved pre-slap versus post-slap.

Similarly, Will's Oscar win decision was made from his actions prior to this incident, so I'm not a fan of taking it away.

Having said that, though I was glad to see he resigned from the Academy, I told my husband last week, I was in hopes that if he was truly sorry, he'd offer to give his Oscar back himself.

However, here's the problem with that - historically, the only people that have ever refused or offered to return an Oscar have been considered as given a metaphorical slap in the face to the Academy, if they do - which could only be further misinterpreted and make things worse, so I understand why he didn't.

All I know to do at this point is hope that there can be healing, now, for both men, that it can be resolved privately, and that we all think a bit more on about which aspects of our culture should be preserved versus perpetuated - and how those aspects we may not want to perpetuate may have, in fact, existed on both sides of this issue, to varying degrees.

In an earlier post, I said that Alec Baldwin didn't wasn't saying "sh*t" like some other comedians and actors have done, despite their own crazy-violent histories, because he knows he is.

However, I was wrong.

Because Alec Baldwin did, in fact, tweet the following ... 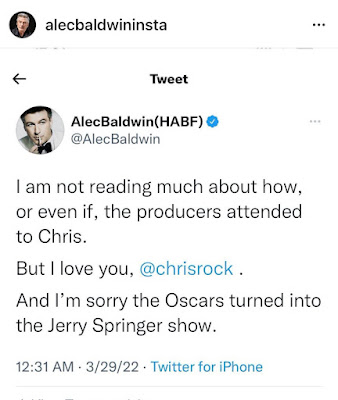 Again, I really don't understand why the actors and/or comedians that we know have violent histories - Alec Baldwin himself being sued for punching paparazzi over insulting his wife - are supporting just Chris Rock - as if they didn't do the exact same thing or worse - just not at the actual Oscars?

At least Will apologized, you never did - and if you're going to do that, at least acknowledge your own history of doing the exact same thing - just not at the Oscars ?

I understand if you're personal friends with one of them, or even both of them - but friendship doesn't mean inserting yourself into the issue publicly and stirring the pot.

Supporting a friend doesn't mean you either have to publicly support or enable them them 100%, if you think they're wrong or need to take a responsibility for some aspect of the situation.

In fact, IMO, the ideal way to handle this situation, if you're friends with either Chris OR Will, is to talk it over with them privately rather than piling on, either for or against them publicly.
Because if you're truly their friend, you'll neither enable them nor abandon them - it's possible to privately discuss what you are proud of and also what disappoints or even hurts you; as well as what concerns you, for both others and for their own well-being.

But I guess sometimes the "ideal" way of dealing with things, in the moment, sometimes flies out the window due to shock, I guess - hindsight is always 20/20.

Like that standing ovation.  I'm not sure what any of us were thinking or why we did that?  lol.
I'm thinking it was less about the slap and more about his frail humanity on display, and yet I'm still now sure - but in hindsight, probably not a good idea lol.
Nevertheless, I'm hoping lessons were learned on all sides, going forward.

tell them what you liked and didn't like about what they did, and if you're concerned about them/their behavior.