Howard Stern, Rosie O'Donnell and Others Comparing Will Smith to Trump? LOL

I left this comment (or a shorter variation) on sites elsewhere, after reading Howard Stern yammer on and on.

I disagree, Howard - nobody acted like Trump lol. Even if we HAD to choose between Chris Rock and Will Smith for who acted the most like Trump - which we don't - I'm pretty sure Chris Rock would win for making fun of someone's medical condition for a cheap-shot laugh that wasn't even funny, much like Trump made fun of that disabled reporter - but even that's a stretch. Also, we do not have to take sides between Chris and Will - they both behaved badly - but not equally badly - in different ways. As for the Jason Momoa argument, by that logic, you could just as easily say that Chris likely would've never made a cruel joke about Lisa Bonet to Jason Momoa, for the same reasons lol. My fellow liberals, we all claim to not condone violence, but you know dang well that if Trump had made that cruel joke, instead of Chris, you'd be cheering Will on lol - and that we've cancel-cultured others for less cruelty than Chris displayed. Do we want a culture of kindness or not? Howard, darling - erm - may we remind you that you helped build Trump City, my friend, then regretted it? So I'm not sure we can trust your judgment on mental health ;) Besides, most of the people saying this stuff are comedians, who are now terrified that someone will come up on stage and slap THEM now lol. . Good - let them, and anyone else who hides behind "freedom of speech," now fear of the social consequences of crossing the cruelty line. Maybe they'll think twice before doing so, from now on ;)

As an afterthought, though, I highly doubt Jason Momoa would ever say such a cruel thing, about anybody.

Erm - Chris Rock is a lot of things, both positive and negative, but a gentle soul ain't one of them lol.

Remember, he's the comedian that said, "Bullying is good for you."

Really disappointed in the increasing number of people jumping on the bandwagon and now taking sides against just Will, as if Chris Rock was completely innocent - as if we need to take sides.

So do we really want a culture of kindness or not, fellow liberals?

And do we believe all freedom of speech should be protected from even social consequences - or not?

Lastly, do we believe there's never an excuse for violence - or not?

Better think about this one carefully, fellow liberals, about what message we really want to send, here - because this one's not so black-and-white simple to sort out.

As I write this, news came over the wire that Will Smith apologized to Chris Rock. 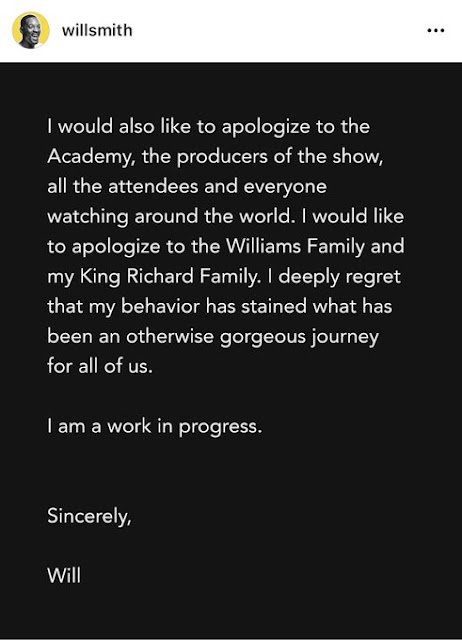 Make of it what you will (no pun intended), but regardless, I'm gonna let this go now - other than to say, careful of the message we send, fellow liberals -  this one isn't so easy to sort out and pick a side on - and we don't have to pick a side on.

Let's make sure whatever message we send out is who we really want to be, too.