(*Edited - rearranged the order of this post to flow a bit better, when I had more time, and I added some more about what the CSRs said about the (cough, cough false) advertisement, but no information has been deleted.)

So I was interesting in trialing Rosetta Stone versus Babel.  Both have free trials, but upon looking at the website on February 23rd, I saw this ad ... 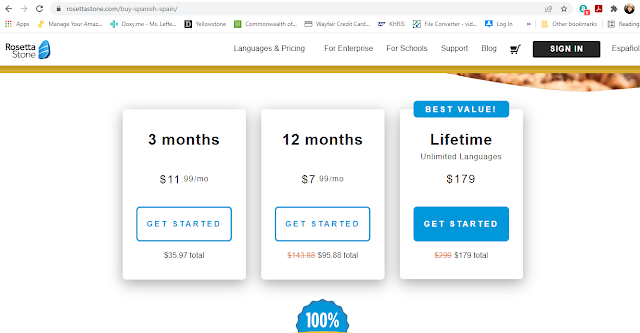 Now, what would you think with the first two options - that it's like a Netflix subscription - $7.99 a month for 12 months, right?

Wrong - there IS no monthly installment subscription fee plan for the first two options as advertised - see below ;)

However, the bank charge instantly texted to my phone was $95.

I had plenty to cover it, that's not the issue.

The issue is, since I'm a contractor, my work ebbs and flows during the month, so I like to put larger purchases on my credit card, then try to pay them off before my next monthly billing statement (to save on interest rate).

This way, I can ensure that I still have a certain amount of cash on hand in my checking account despite any slow/low workflow days during the month. ;)

Also - and this part was completely my fault - making this purchase while multi-tasking, I somehow chose Spanish-Latin America versus Spanish- Spain/Castilian Spanish.

So  I instantly realized the payment issue and language issue immediately and I called Rosetta Stone's customer service  immediately.

I asked about the advertisement.

They said the above ad was "just to illustrate how much $95 dollars broken down per month is, it's not literally $7.99 a month" and that I "should've read the fine print, which explains that The only plan which offers installments is the lifetime plan, but they're not monthly, just broken down into 5 installments"   - which is ironic, because the above ad for the lifetime plan doesn't even mention an "installment plan" at all? lol

Regardless, despite the shady advertising, they were right, that's on me -   I should have read the fine print.

So then asked them if it would just be possible to change the method of payment from my debit card to my credit card, as well as change the language choice - and told them if I liked the product, I'd definitely upgrade to the lifetime membership, so that I could learn more than one language.

They said could not change the payment method, either online or over the phone -  they'd have to cancel, refund, and then I could purchase again -  and the refund would take 7-10 business days.

On March 9th, I called again, explaining that I still wanted to purchase the product, it's not that I'm unhappy with the product, I haven't even tried it yet - it's just I needed to use a different method of payment, but I couldn't do that until the initial purchase was refunded.

The CSR escalated the ticket to the accounting department, stating they have no way of seeing what is going on financially, and that it would be another 3 to 5 business days.

I called back today, and this time the CSR actually called the accounting department, and the refund is still pending and they don't know why - and we're getting closer to the 30-day grace period, after which you cannot cancel.

It's just at this point, inching closer to that 30-day grace period before no refund can be issued -   this is starting to look like they're intentionally dragging it out past the 30 days?

Still trying to give them the benefit of the doubt that something really did just go wrong with processing - but I'm also growing less inclined to purchase the product at all and go to Babel.

And the thing is, I would've upgraded to lifetime, so they'll be losing the purchase completely, when they could've had it, plus an upgrade, had they just allowed a method of payment change that day.

However, I'll give them just a few more days of benefit of the doubt, but if it's not done by March 22nd - the day before the 30-day grace period ends and thus ineligible for refund - then I'll know it was all shady BS and I'm stuck with it.

Everyone mentions what a great product this is - but only a few mention the shady issues when something goes wrong - so is it just me?

I mean, I did choose the wrong language dialect accidentally, and I should've read the fine print, that's true - and yet still, not being able to change the method of payment and appearing to push  the refund past the 30-day grace period still just seems a bit off to me -  am I wrong?

But the good news is ... why I wanted to learn Castilian Spanish in the first place :)

It's because we are hopefully visiting Spain next spring, which I'm super excited about! 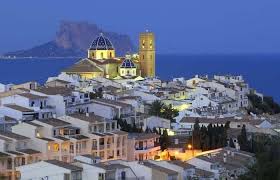 This is the exact town we'd be staying in, by the way, without naming the name, on the Eastern/Mediterranean coast of mainland Spain. Not too big and not to small, both hills and Mediterranean Sea views, authentic white pueblo villages  - because although authentic, Moorish-influenced white pueblo villages (often with Spanish-tile roofs)  are more plentiful in Andalusia,  they aren't exclusive to Andalusia (just more rare the further North you go ;)

I remember a bit of Latin-American Spanish from college (and slang/how to curse in Spanish from my restaurant days lol) -  but Castilian Spanish has a few differences and a completely different dialect.

(And of course, there's also the Catalan/Valencian dialect, but that wasn't an option on Rosetta Stone, and I understand even in Catalonian regions, you can still get by with Castilian - as long as you make no political statements about Catalonian independence, one way or the other, especially as an American expat ;)

That is because unless you are to live in Lisbon, Barcelona, Madrid, or Seville, or the islands like Ibiza, Mallorca, or the Canary Islands, the cost of living is super cheap in both countries - the housing costs are comparable to living here in Kentucky!

However, we both agreed with don't want to live on the Atlantic Ocean, unless it's near the equator or south of it, because the Atlantic  Ocean is cold and rough, so Portugal was kind of out.

So Spain became the top (compromise) contender for a retirement destination between Mark and myself -  either the Eastern/Mediterranean coast side, or a little further down the coast near Valencia, but not too far south in the heat.  Also prospects would be near the Pyrenees, near Cadaques, on the Northeast coast or near the Pyrenees but more northwest, on the Bay of Biscay, near Basque country (although those both of these latter two regions are a bit pricier).

PLUS -  Spain has special retirement Visa for expats (though I'd have a separate one because I'll still be working, but I can work from anywhere).

And BEST part is, as mentioned -  other than if you're trying to live in Barcelona, Madrid, Seville, Ibiza, Mallorca, or the Canary Islands (which I wouldn't want to anyway, either huge cities or an island, less trees, limited views of nature, plus getting stuck on an island if something goes wrong, no thank you) -  the housing prices and cost of living otherwise in Spain are both about 20% cheaper than living in a small cabin the mountains of North Carolina, can you believe that?

In fact, housing prices and the cost of living is almost equal, maybe even slightly cheaper, to the housing cost and cost of living here in Kentucky - but you get so much more, as far as views, space, and things to do!

Also, they only require $8,000 in the bank and good credit to prove economic viability on Visa app (both are no problem) - AND after six months, you're eligible for public healthcare, plus even the cost of supplemental private health insurance after retirement is about one-third of what we would pay for it here!

PS - Apparently, Rosetta Stone was bought by IXL in March of 2021 and is under new ownership - therein might lie the problem.