... second round of the NCAA "March Madness" tournament.

Yeah, so ... this is still up on my wall from Mark's birthday in February...

Despite the fact that I went to Kentucky -  I'm "not allowed" to take it down until MSU loses in the tournament , because it's "bad luck"  ;)

("Don't touch it, don't even look at it" - This is Spinal Tap reference lol).

Well, since Kentucky lost in the first round of the NCAA tournament ( I know, WHAT???  St. Peter's, though, gotta admire them, they're a tough little Cinderella), I'm now rooting for my husband's alma mater, Michigan State, in their second round, playing Duke - and despite a terrible regular season - they are unbelievably still hanging in there!
Anyone but Duke, please, thank you :)

That's right - because one thing we are united in, when it comes to college basketball -  is our eternal disdain for Duke lol 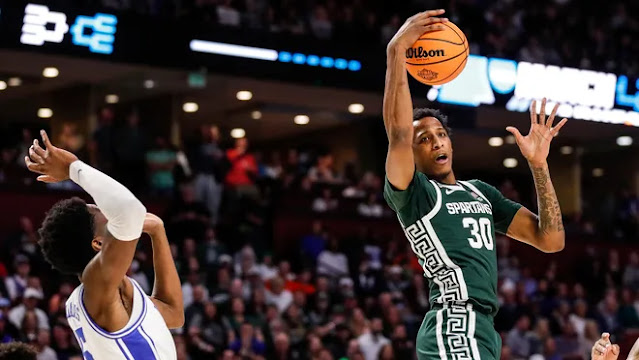 Like I said, MSU's regular season was horrible - but they're peaking right at the right time!

This is college-basketball royalty, facing off - two legacy powerhouse teams, two powerhouse coaches, both having faced each other in the tournament more times than any other coaches in history.

But can I just say, I love Tom Izzo as much as Calipari, maybe even more?

(I know, blasphemy in Kentucky, but true.)

He's just such a crazy character.

By all accounts, he's the nicest, funniest, most generous guy interpersonally - but on the court, man, he's gotten increasingly scary :/

He's been fairly calm during this game, though, I'm almost proud of him - because he's gotten increasingly angry, in recent years, such that his players literally have to hug him during the game and tell him everything is okay, calm down lol.

It's kind of hilarious - one minute, he'll yell all red-faced at his players like "I effin HATE you, right now, whattya doing?!?  ... 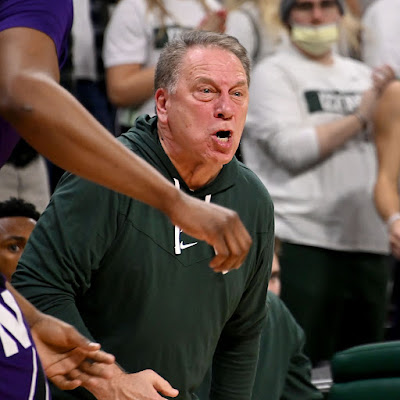 ... and the next, turn around to the camera with like, the biggest, weirdest, half-psycho smile on his face, like "Oh, yeah ... Hi.  So you know I love them, but we suck right now, they're pissing me off." lol 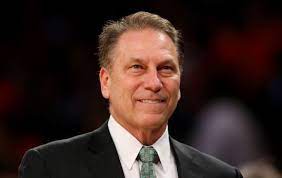 Then the moment he turns away, he drops the smile and looks like he could kill someone with his bare hands lol.
I dunno, it's kinda scary, and yet it makes me laugh, I can't help myself. 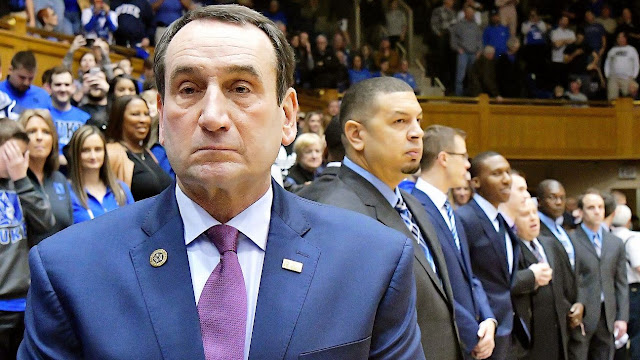 Well I'm not going to say too much, so as not to detract from his legacy during his final, retirement year - BUT - all I have to say is - Kentucky VS Duke, 1992 - and effing Christian Laettner (who still owes me about $400 from lost tips while cocktail waitressing while in college at UK like it was MY fault they lost- Grr - lol )

(Speaking of Laettner, Hoggard of MSU very nearly pulled a Laettner at the buzzer before the half! But alas, no.)

Back then, in 1992, I used to call Duke the "Alabaster Army" because they were the only major Southern team who still had mostly white boys as star players, except for Grant Hill, who isn't exactly dark.  Even when they began to add more players of color, they were all still pretty light skinned - which of course resulted in less calls against them and more fouls called on the other team, after they'd flop around on the floor, acting mortally wounded lol.

In fact, this is the first year I've seen Duke have a majority of black players - and not all light-skinned - good to see :)

Also, Duke isn't getting all of the calls, this time, nor are they flip-flopping all over the floor and acting like they've been mortally wounded anymore - also good to see.

I still say "Grr" at Duke, but less so, because of these changes lol.

At the moment, in the second half, it's 65-62 Duke, with 6 minutes left to play - I can't believe it, considering MSU's regular season this year!

It would be awesome if the Sparties, even in an off year, could giant-kill Duke, but we shall see, it's close ....

PPS - Well, the good news is, I can take the banner down now? lol.

Clearly, the banner didn't bring them luck - but then again, I may have glanced at it, a time or two - unintentional Wildcat jinx?  :)