*This post will be updated as the bills comes to a vote.

Some Democrats initially showed support for these "school choice" charter schools, too, because at first, they sounded plausible, and "who doesn't like choices?"

HOWEVER - many other states' prior attempts to do so have resulted in failure - meaning not only did traditional public schools go bankrupt (i.e., Michigan) -  but charter school application/admission/membership fees kept going up, at times to $2000 a semester -  until these schools contained mostly white, wealthy children and excluded the poor and people of color - resulting in even less educational opportunities for them than already exist.

In other words, this bill would mean families that have the financial means to afford the application/admission/membership fees, as well as ability to travel outside their public district to a school of their choice,  may do so - subject to school approval - and regardless of school performance.

It also would mean poorer children who cannot afford the fees and have no means to travel to these schools, cannot -  regardless of their school performance.

It means that on top of families paying out of pocket for application/admission/membership fees, charter schools would also receive additional public local, state, and federal funding.

The bill was approved by the Kentucky House Education Committee, 11-9, and advances to the full house vote, but would also still need approval from the senate as it was introduced first on the house.

First of all, most proponents of anti-CRT can't even tell you what CRT is, they only know that is has something to do with black history in America - proving them racists - and thus, the entire reason CRT is needed.

Ask an anti-CRT supporter what CRT is and see for yourselves ;)

If they do know what it is - which is rare - they think it's either a new Democrat thing or a Karl Marx idea - when in fact, Sojourner Truth first proposed CRT - before slavery ever ended.

The bill would require 24 approved documents to be taught, disallowing any other documents or discussion around:

A)  The historical legal practice of slavery, to include discussion around the meaning of the infamous "three-fifths" clause found in our constitution, which enabled three-fifths of "anyone who was not free" to be counted as their constituency population, despite the slaves not being able to vote themselves -  done without ever actually using the word "slaves."

B) The legal, institutionalized after-effects of slavery, such as Jim Crow segregation laws into the 1960s, and any residuals that might exist today.

Though there are not yet consequences detailed for teachers and students discussing these issues, it discourages any discussion of these issues.

In other words, anti-CRT is classroom censorship - a concerted effort to further white-wash history and pretend that slavery existed in a vacuum with no after effects, and that these laws didn't exist and don't have residual institutional and systemic effects still today - performed by the same people that yammer on and on about being allowed freedom of speech  themselves.

The bill passed the KHEC, 15-6, and advances to the full house vote, at which point, would pass the bill into law, since the bill originated in the Senate.

3)  Senate Bill 1 - Superintendent Authority - related to anti-CRT, it gives the superintendent sole authority to hire principles based on the curriculum they approve, rather than including school board, staff and parent contribution.  The bill passed the KHEC, 13-7, and advances to a general assembly house vote.

In other words, this is a shift towards authoritarianism - state Republicans are attempting to strip away away democracy by legally disallowing any votes, voices, and perspectives but  their own -  by now attempting to exclude school boards, staff, parents, and students from voting or having a voice in any curriculum or funding decisions. 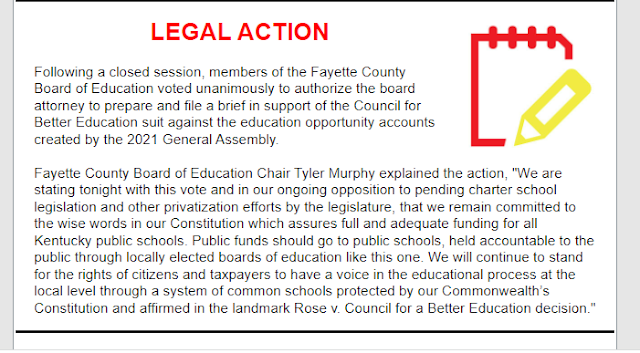 God help us, methinks the supposed party of anti-Communists are  the ones acting most like communists - the smellers may be the fellers lol.

Technically, they'd be fascists -  considering the anti-CRT/race elements and fascism usually prefers a race -  but fascism and communism are really two sides of the same old government control coin anyway.

PS Spain is looking better and better to us by the day, mind you lol.

Yes, I know there's a extremist right wing growing in popularity in Spain, too, but considering the diversity - and especially fairly recent dictatorship rule under Franco (until 1978) -  I'm hoping the right-wing authoritarianism trend will be slower there - I said I hope lol.

UPDATE:   House Bill 9 passed the Kentucky House of Representatives with a vote of 51-43 (several Republicans surprisingly opposed the bill, in the end, out of concerns about  transparency and accountability.

The bill now goes to the Kentucky Senate for a final vote.

Although initially open to charter schools if they provided funding for transportation and a cap on fees, Governor Beshear is now expected to veto the bill in its entirety, as there are no provisions for these items within the bill.