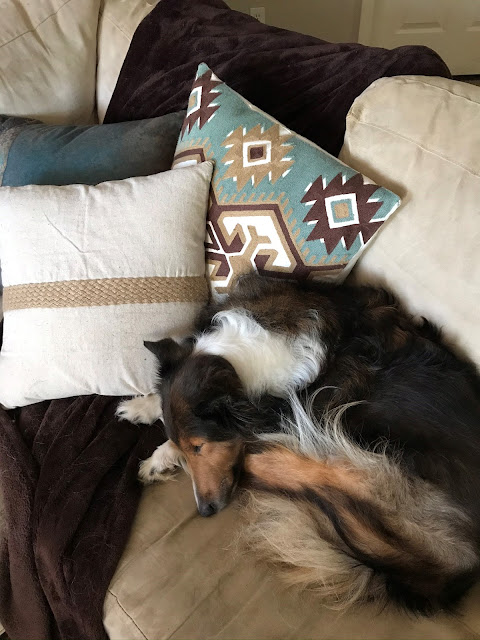 She's at the vet after emergency surgery.

Mark had decided not to have her spayed, which was his decision, since he got her before we met.

My opinion, on the other hand, is to always have your dogs neutered or spayed, unless you're breeding show dogs - not only due to the amount of unwanted, uncared or under-cared for dogs we have in America -  but because of these sorts of complications, particularly in pure-bred dogs like Brookie.

However, Brookie is really his dog, since he got her two years before meeting me, so it was ultimately his decision.

So she went into heat about a month ago, which never stopped.

We had scheduled a lipoma removal from her hip joint for tomorrow, as she had just cleared an infection from that, but had decided to push the surgery back a month, giving her time to complete her cycle.

However, she started to get finicky with her food last week, less energy.

So we called the vet, who thought maybe the lipoma was infected again, so he called in an antibiotic to cover her pre-surgery.

However, she stopped eating altogether, vomited, and drinking water like crazy.

No fever, though, at any point.

Now, the thing is, my husband obsesses over our pets' health to the point of driving them, and our vet,  nuts lol.

I always have told him, being in the healthcare field myself, "When I think there is true cause for concern, I'll let you know - and I'll be her biggest advocate, I'll push past that front-desk screening to the doctor like we're on fire lol.

(That is not to say their front desk isn't nice or good at their jobs, they're both nice and very good -  but they do have a screening protocol they're supposed to follow, for good reason, because people panic over their pets and everyone wants them to be seen immediately - but, frankly, they're also just - not actual vets.)

So at this point, I said, "The antibiotic doesn't appear to be working, she's getting worse.  There's something else going on, other than being in heat too long and the lipoma.  Can you call the vet and get her lab tests first at least, rather than waiting until the day of surgery? I don't want her going under for the lipoma removal if her health is otherwise compromised"

So we did and they at first said to come in first thing, but then called back to schedule her at 2 p.m. today because the vet was booked solid.

I said, "Erm - ask them if we can go ahead bring her in this morning, as we initially discussed.  She's walking okay, but refusing to eat her breakfast at all, she's getting lethargic.  I told you, if I think it's true cause for concern, I'd push.  It's time - let's politely push the front desk to make sure she's seen now."

Mark called and as politely as he could said, "I'm just going to bring her in, she's not looking good, I'll be there in 15 minutes" lol.

So though he had a full schedule, Dr. S dropped what he was doing, took an x-ray, and saw a large opacity near the abdomen.

It turned out to be pyometra - an infection of the uterine lining - and the opacity was a large build-up of pus.

He said it was an unusual case because there was no fever, no odor, no discharge other than the usual small amount of blood from being in heat - he hadn't ruled it out, but he didn't initially suspect that as the cause.

He also said if we hadn't brought her in, her chances of survival would've been slim - because if pyometra isn't caught, dogs die within in 4 to 5 days, )

At this point, she's been spayed and is on IV antibiotics and fluids.

They're keeping her overnight to watch her and keep her on IV antibiotics and fluids, so she's not out of the woods yet, but it did appear we caught the infection in time.

And thanks to Dr. S for dropping everything and hopping on this immediately - SUCH a good vet!