In fact, I don't understand why anyone would believe the 16-year-KGB veteran that is Putin that he, and superpower that is Russia, are the "real victims" here, especially people that claim to be so anti-communist?

I'm tempted to ask some people, but then I know that I will only get an earful more of propaganda, showing me fake news, photos, and videos, interpreting their Russian for me, when I have no idea who they are or what side they're on, or if the video isn't staged so - no thank you.

Also, have you ever noticed that the people peddling this sh*t are the sort who are themselves incapable of telling the truth about anything? lol

They're also the same types that tell "fish tales," as we call them in the South.

"This one time, I went fishing at Barren River Lake and as sure as I'm sitting here, I caught a bass as big as a man, with a piece of cheese on a string, no lie.   He gave me a struggle.  It took four men just to pull him in.  But in the end, he looked me square in the eye, we stared each other down, and I nabbed him with the net.  He nearly sank the boat.  People from miles around came t see it.  I got a trophy."

"Really.  Can I see the trophy?

"Are there any pictures?"

"No, nobody took any.

Now, you know ... none of that ever happened lol.

Or in today's world, they show you a clearly photoshopped picture or a grainy video in which you only see a bunch of people standing around something, but you can't see what it is, if anything at all.  They could be standing a round a beer keg by the river, for all you know. 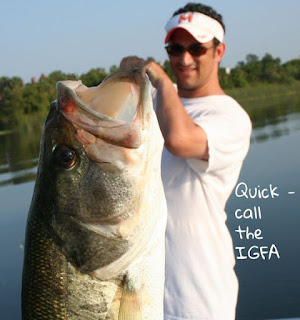 Did anyone ever stop to think, "If that fish was truly that big, there's no way he could hold it like that?"

Speaking of which, Vladdy has his own fish tales, quite literally, in fact.

For instance, this picture of of Putin holding a record-breaking 21 kg pike in 2013 that he supposedly caught on his weekend getaway. 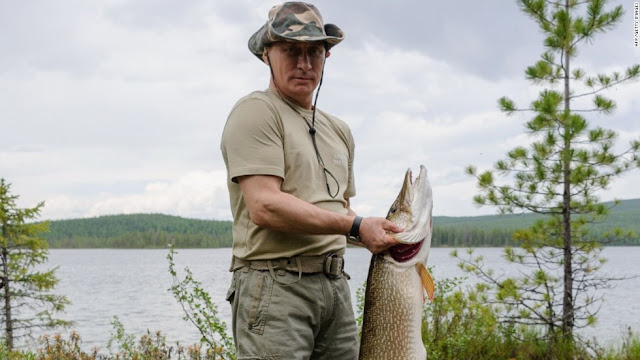 Human wrist strength is fairly weak, compared to the rest of the body (which is why broken wrists are the most common types of fracture), even in the strongest man - so lifting this weight would require more employment of upper arm/body strength, which would result in more visible muscle tension.
In in other words, his biceps, shoulder, and upper chest muscles would be more engaged than they are, in this photo.
Also, holding a nearly 50-lb fish by its gills, like that, would rip the fish's gills from its body!

Secondly, even if that was possible and true, just because he's holding the fish doesn't mean he caught it - there are no pictures of him actually catching it.

Lastly, he published the photo in 2013,  claiming he caught it on a weekend getaway - but he looks significantly younger and more fit than he did in 2013.

In fact, remember all of those shirtless photos he had taken of fishing and horseback riding? 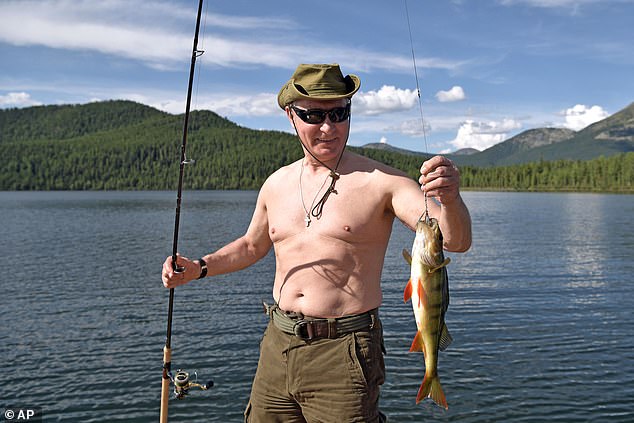 Speaking of those 2009 photos  ... that fish is still on the line, like he just caught it - but there's no movement blur, no indication of fish movement at all - it's just hanging there, lifeless?
Wow, so that fish must've taken one look at "Vlad the Conqueror" and died while still on the line, I guess? ;)
And then riding a horse shirtless, for what reason no one knows ... 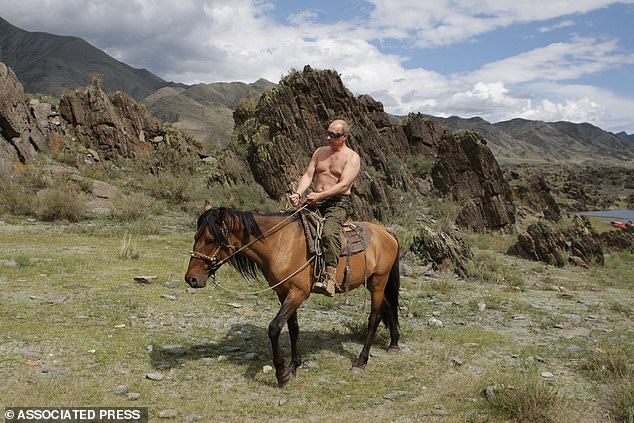 "Look at me, Vlad the Conqueror - I'm so virile and powerful!"

Dude - WHY AREN'T YOU WEARING A SHIRT?!?

That's not sexy, or even cool -  it just makes you look like you're trying to overcompensate for something that's actually ... very tiny ;)

Or this ridiculous PR stunt - which may be my favorite -  where he supposedly went scuba-diving in the Black Sea and came up with 6th-century Greek pottery shards? 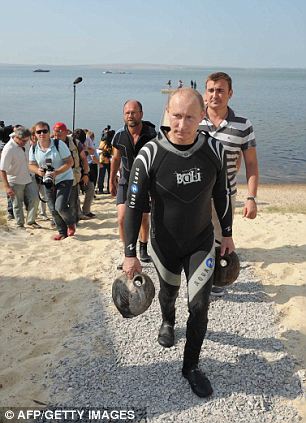 Wow, amazing - that the 6th century Greek pottery you supposedly just found in the Black Sea is free of any barnacles or moss whatsoever!

Because ancient Greek pottery found undersea always looks like this, before being cleaned ... 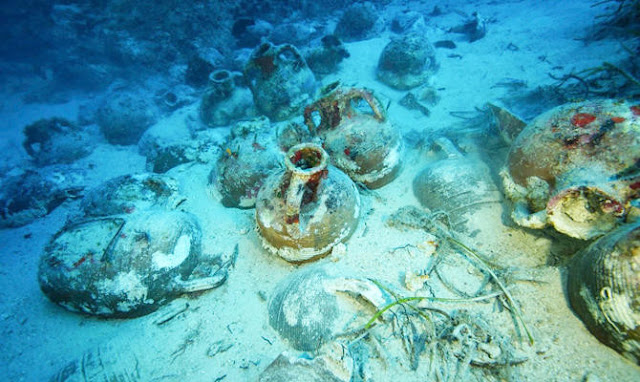 And alas, as we know now, Putin's spokesman,  Dmitri Pescov, later admitted in an interview that it was a publicity stunt - the pottery shards were planted there for him to find  LOL

However, that one's a tie with this one for my favorite Putin propaganda - erm - "fish tale"  -  that time he supposedly saved a whole television crew from a "loose tiger" by shooting it with a tranquilizer gun? 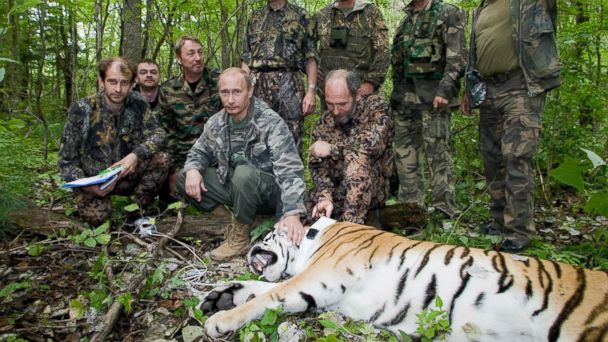 Of course, though an entire television crew was there, not a single one of them managed to capture any of this on film, even beforehand, because the entire group of at least 9 people were apparently all simultaneously attacked by a single tiger, all at once  - so all we have is an after photo, after Putin shot the tiger with a tranquilizer gun, saving them all - hooray! ;)

And though Putin claims to supposedly wrestle bears as part of the "Bear Calvary" Russia tradition - there are no pictures of it, anywhere.

For the gullible, politically biased, and/or truth-and-fact challenged,  despite it saying "real footage," it's clearly fake - note how the bear moves but Putin doesn't, he appears to be frozen?

I also love it how people claim Putin defends both Judaism and Christianity - how do YOU know?

Though the Ukraine does have a Nazi problem, it's still a minority  -  and President Zelensky IS Jewish!

Regardless, you don't bomb the shit out of an entire country, and its civilians, including children - who are Christian, Jewish AND Muslim, mind you - because of a few Nazi sympathizers!

If that were the case, both America and the UK could be justified as being bombed, because we have Nazi sympathizers here, too - we even have an American Nazi Party!

Not to mention, Russia itself, as a whole, isn't exactly known for being the most Jewish friendly country in the world.

And how do you know Putin's a Christian, what proof do you have?

How can you prove anyone is a Christian or not?

Especially since apparently my modern Christian brothers and sisters are clearly A-OK with habitual and pathologic lying, they believe they're in a war and all is fair in war, so who can tell/who knows?

In fact, I'm pretty sure these  so-called "Christian" types are the type who would've believed, back in the day, that killing Jesus was justified, because at that time, Jesus was feared to simultaneously be a threat to both Judaism and the Roman Empire - thus with their current track record, current self-asserted "Christians" would've cheered it on!

PS - Speaking of Putin, supporters of his brother from another mother, Trump, say  "Trump would've been tougher on Putin."

Oh bullshit - all he has done is praise the man - in fact,  he was still praising Putin as being "savvy" and "a genius" the first day of the Ukrainian invasion!

And let us not forget how much not just Trump-Republicans, but Republicans in general, called the Russian hack of the DNC's emails "fake news" and tried to prevent an impeachment of Trump for  collaboration with Russian election interference and withholding aid to the Ukraine unless they found dirt on Biden's son, Hunter.

Oh, you silly Trump-Republicans - whether you really are that stupid, that lacking in short-term memory, or  that immoral, full of fish tales yourselves - you know you will eventually go down in the annals of history as such, and a joke, right?