After I posted two days ago about Trevor Noah having us take a closer look at this Kim/Kanye situation, I added a PS that Kanye had been suspended from Instagram for harassment, which happened just after I finished the post.

At the time, I thought he'd been suspended for harassment of Kim, but as it turns out it, apparently the suspension was actually after Kanye directed a racial slur towards Trevor Noah, because Trevor said what he said about the situation and his concern for Kim, and all women in this situation. - adding that if Kim can't get out and away, what hope is there for women without her resources?

He also slightly tapped Pete for sending back text messages that he was in bed with his wife, as I did - that escalates the situation and could be construed legally as provocation - but I guess Kanye must've skipped that part?

A lot of sites won't tell you what Kanye called him, but I'll tell you - he called him a "Koon" - when spelled with a K, it means a black person who is anti-black and acts against black people, as if they are white.

Because racial relations is pretty much Trevor's domain.

Trevor is from South Africa, born under apartheid.  He was literally born a crime, because race-mixing was expressly illegal in South Africa when Trevor was born in 1985

I'm quite sure that's not the first time he's been told he's not black enough or white enough - in fact I know it isn't, if you read his book about growing up in South Africa.

As IF this had anything to do with skin color anyway.

And do we have to take sides between skin color and gender ?

It's about speaking up for what you feel is right - whatever your skin color or gender or socioeconomics are.

In fact, since people of color and women are both marginalized minorities to varying degrees -  the very last thing we need is more divisiveness, Kanye :(

Regardless, Instagram caught wind of it and suspended Kanye for 24 hours.

Trevor himself, however, responded with compassion -  adding that he actually thought Kanye's "Koon bah yah" was "funny as sh*t" - but apparently, Instagram did not ... 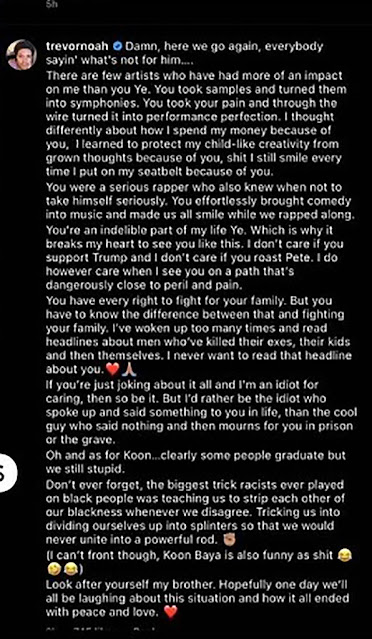 The general synopsis of the post is, he thought Kanye was a genius and idolized him - so it breaks his heart to see him this way.

He essentially won't take back what he said, that he worries for women in this situation, and worries that Kanye will end up in prison or dead - encouraging Kanye to to make sure he's fighting for his family -  not fighting his family.

Most importantly, he said ...

"Don't ever forget - the biggest trick racists ever played on black people was teaching us to strip each other of our blackness whenever we disagree - tricking us to dividing ourselves up into splinters so that we would never unite into a powerful rod."

Amen.
Interestingly, I just quoted Trevor saying similar in his book to someone, two weeks ago, in RL.

We're so glad you're here in America, now, we absolutely adore you

And Hey - if Zelensky can be a political comedian and become a president ...

Well, maybe not president here in America because of our our no-foreign-born rule,  but Senator Noah sounds good to me!

Think about it?  lol

As for Kanye, he's also now banned from performing at the Grammys - it's unclear why, but Trevor is hosting it?