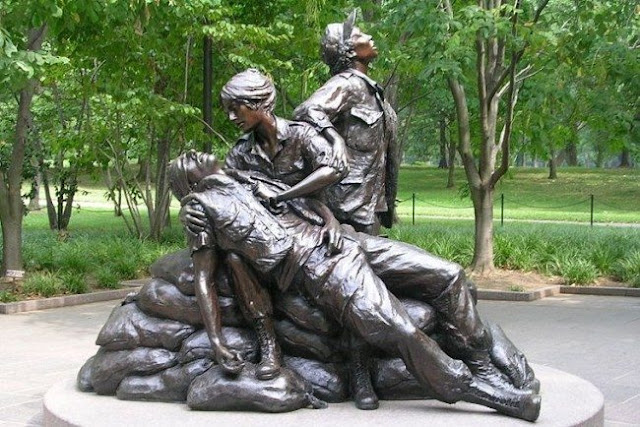 Being that I am a huge Harry Connick, Jr. and family fan, I was watching his "Hunker Down With Harry" series, where I learned that not only is my husband the only one freaking out that I might mess up his hair when I cut it, but that in addition to losing his honorary co-father, Ellis Marsalis to COVID-19, he just lost his mother-in-law, Glenna Goodacre (cause of death not released). 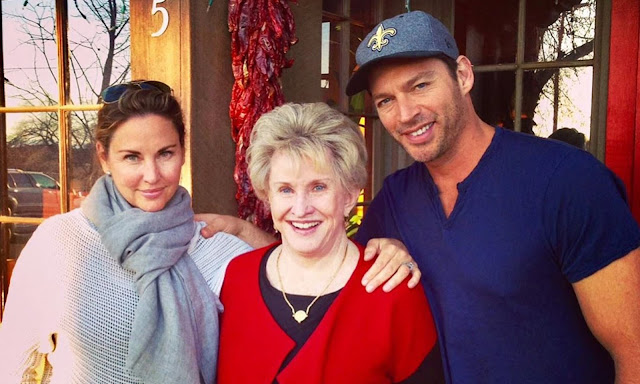 For those who don't know, Harry has been married for 26 years to former Victoria's Secret model, Jill Goodacre, whose mother was a famous American sculptor.

In addition to designing the 2000 Sacagawea gold coin ... 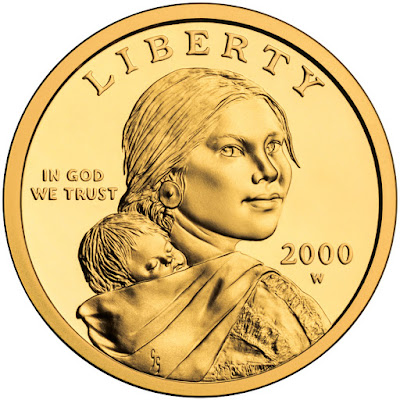 Glenna designed the Women's Vietnam Memorial in Washington D.C. - in tribute to the many nurses and other supportive personnel in Vietnam, whose stories have gotten lost in the shuffle. 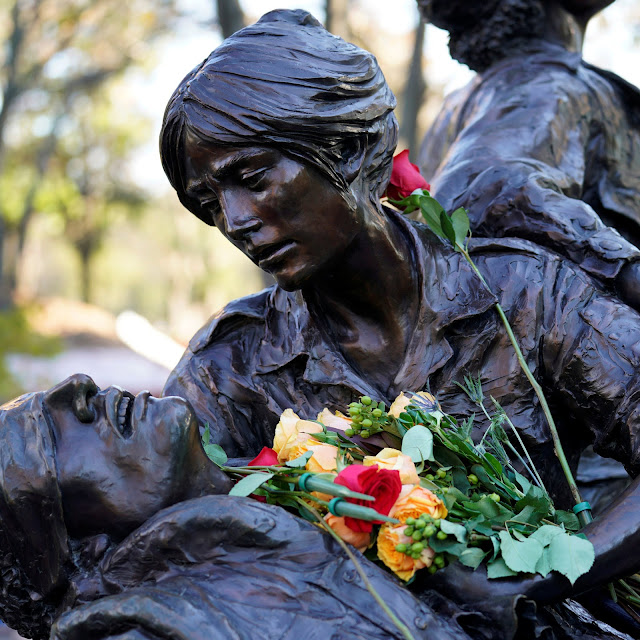 As I've mentioned before, though I'm grateful for Vietnam War movies and other war movies telling us what our male soldiers had to endure, I would really like to know more about what the nurses lives were like - considering my great aunt, Mary-Elizabeth Mann was a WAAC (Women's Army Auxiliary Corp)  in WW2 and Korea, but did not speak much about her experiences. 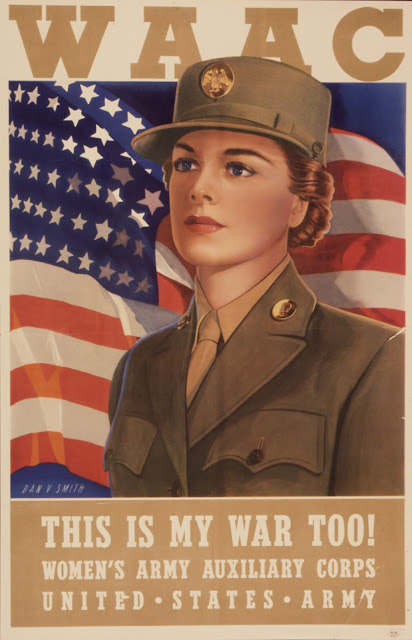 She blessed us with Occupied Japan demitasse cups and Korean wooden dolls, as a result of her time there, but refused to speak about her experiences there,

I only learned after she passed that during WW2, she had become addicted to phenobarbitol just after WW2, initially to deal with malaria as well as trauma - and that she became very depressed after the war and very nearly accidentally OD-ed on phenobarbitol - and during those times, there were no rehab centers or treatment - just hush-hush "kick houses" or secret detox houses, where they dropped you off in empty rooms, without monitoring your vitals, IV fluids, therapy, or offering any treatment at all -  just locked in an empty room with a mattress, basic soup and bread  (if they could  eat), refusing to let you out or anyone in to see you (to get more drugs), waiting for you to kick, simply making sure your body detoxed got clean - resulting in some deaths (as you can actually die with some drugs due to withdrawal).

But kick it she did and became our beloved "Aunt 'Lizbeth"   and found her smile again.  In fact, she had a great laugh, it's the thing I remember most about her :)

As an aside, we called her "Aunt 'Liz'beth"  - both because saying "Aunt Mary Elizabeth" as a child was a mouthful for her young nieces, and because in the south, "Mary Elizabeth" is shortened to "Muhr'Lizbeth."  :)

Also of note, my daughter was passed down my Aunt 'Lizbeth's jewelry box, adorned with her initials "MM" - the same initials as my daughter : )

Back to my point of knowing too little about the lives of military nurses, I mean, we had shows like the critically-acclaimed (but relatively short lived) China Beach - which focused equally on both the men and women of the medical unit ... 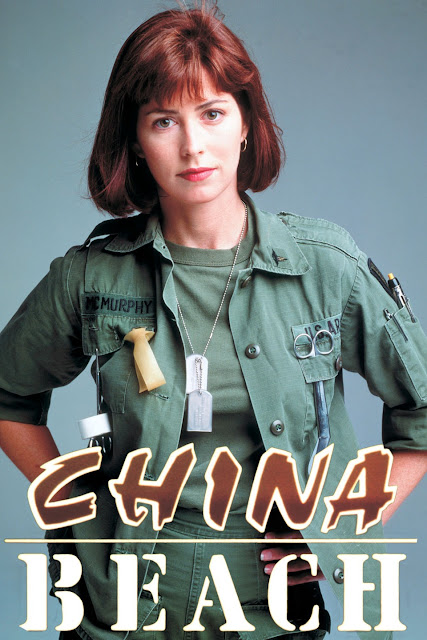 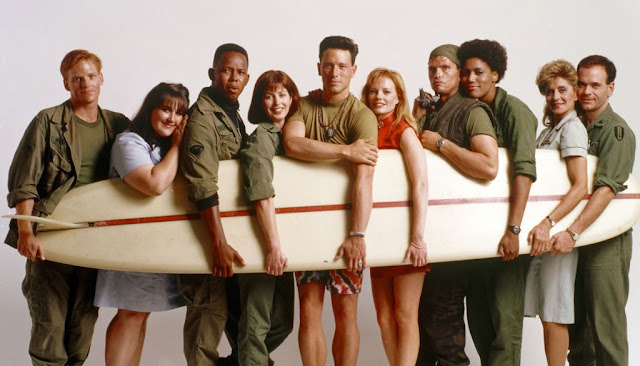 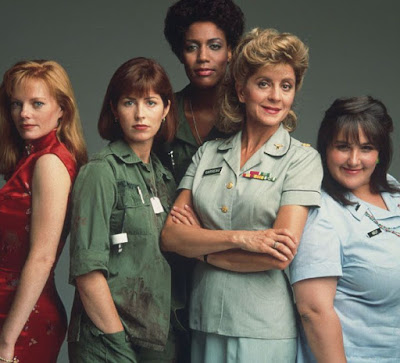 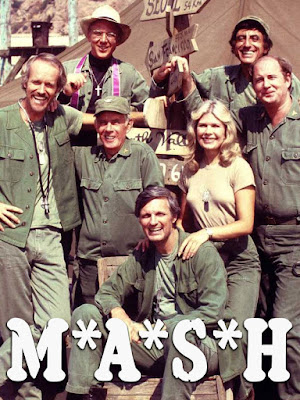 ... occasionally the stories include the nurses, but usually it was around the charge nurse, "Hot Lips Houlihan" - and it wasn't positive.

And the running nurses you see in the opening credits? 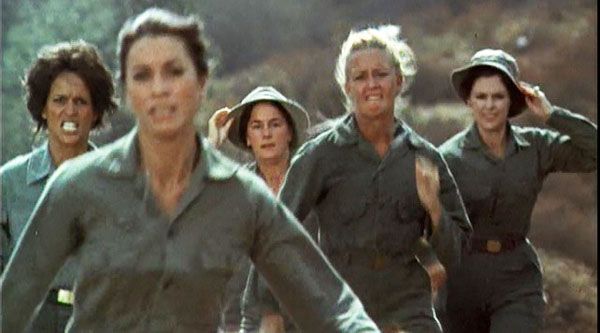 You never see these nurses, ever again, other than the opening credits.

Thus, the stories of military nurses are largely unknown.

During this time of COVID-19, we've all seen the videos of exhausted healthcare workers - but particularly it's our nurses giving the hands-on care - and I thought of my great aunt again, what she must've seen.

I was also reminded of when I worked as a medical transcriptionist at West Florida Hospital, in Pensacola, Florida, when it took a direct hit from Hurricane Ivan in September of 2004 (somewhat overshadowed by the fact that we received 2 more, including the infamous Hurricane Katrina.

I had driven back to Kentucky, to my grandmother's, because the hospital as a work/shelter was at capacity, but I was prepared to come back for relief for my work team.

I remember seeing the windows blown out of the hospital on the national news ... 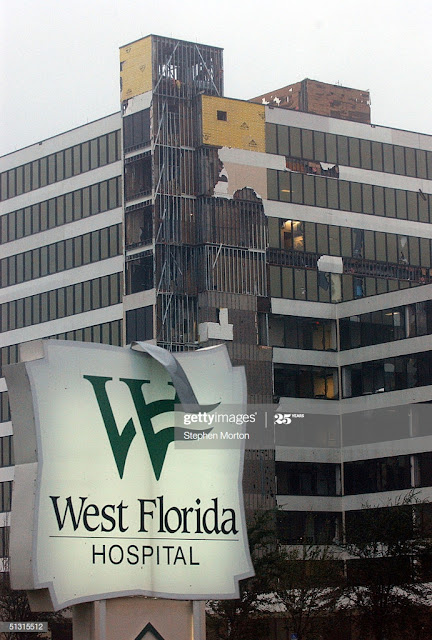 ...  and calling and speaking to a coworker, who was clearly traumatized, I could hear it in her voice - and she was telling me that people were looting through the broken windows, medicine and ice - and that the national guard was on their way, but it may be a bit.

I decided to leave my daughter there (I had already sent her ahead to Kentucky, by a few days  waiting to see if I'd be called in, but receiving word that they were at capacity) because I knew there was no power and that what I'd be seeing would look like a war zone she didn't need to see - and I was not disappointed.

In fact, she did not return until 6 weeks later, when the power had returned and at least the streets were clean and food on the shelves - so it's likely she has never seen these images, which is what Pensacola looked like the day I returned ... 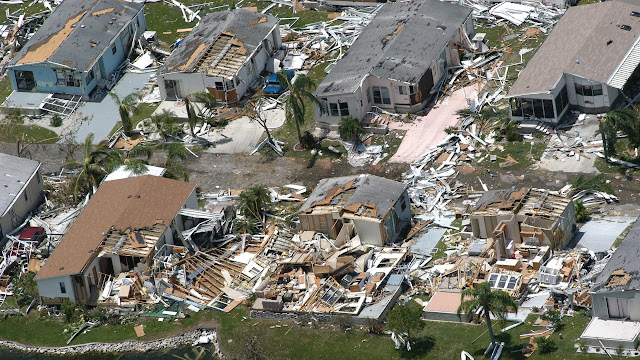 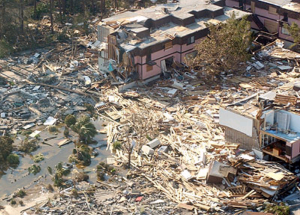 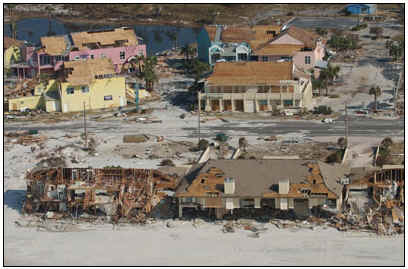 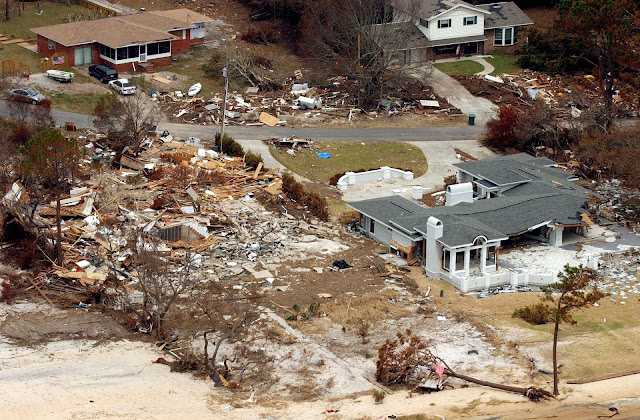 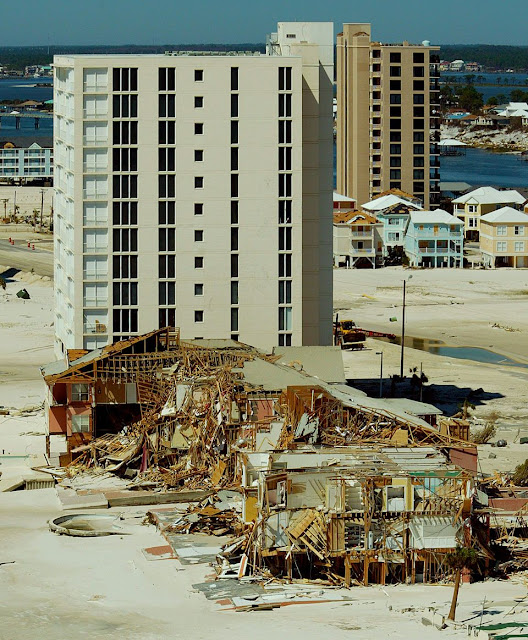 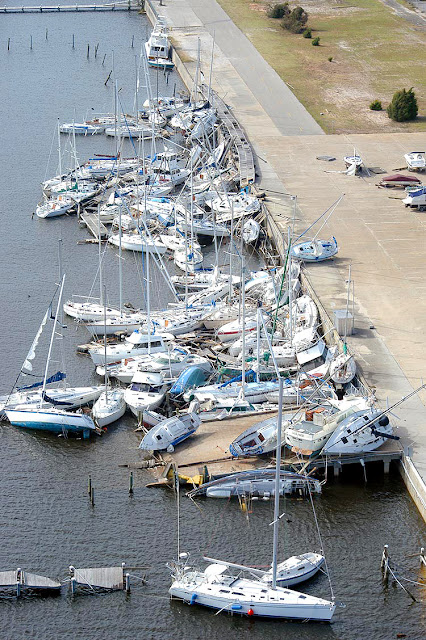 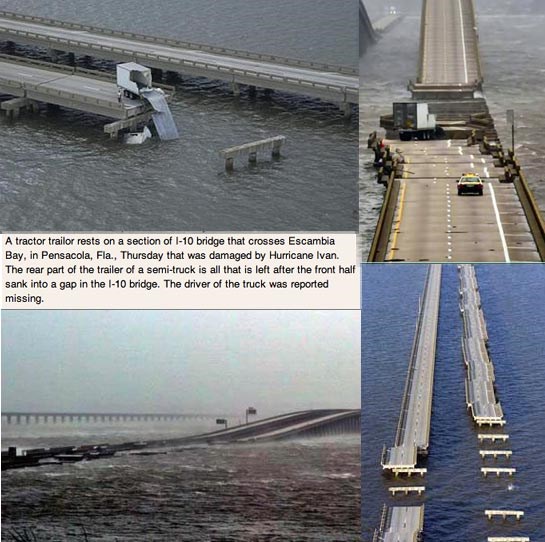 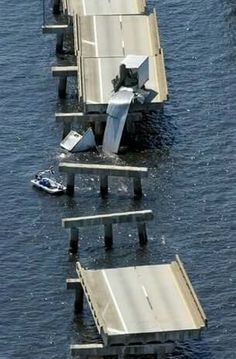 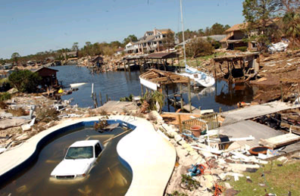 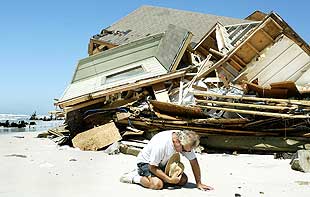 The broken bridge in the above photo?

It was literally 1 mile from my house - the I10 bridge to Milton, FL (and onto to Tallahassee and Destin).

The big red circle was where my apartment was, the red X to the right is the broken bridge in the photo above. 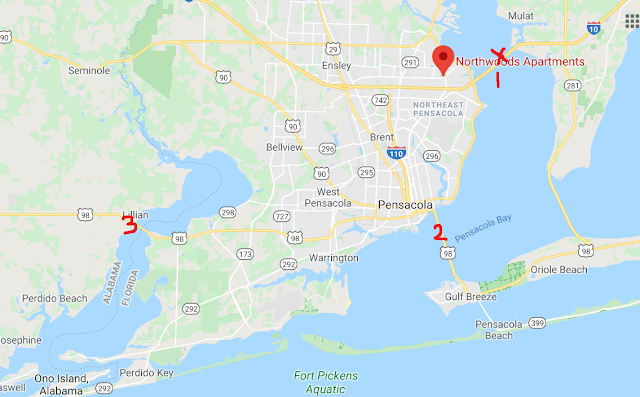 The city of Pensacola itself -  as opposed to Pensacola Beach - is actually a peninsula surrounded by 3 bays.

Though there are several small bridges, there are 3 major highway bridges leading out:  The broken one is HWY 10 and leads to Milton, FL, then on to Tallahassee and Destin.

I remember passing through the national guard checkpoints, showing my license with my address and my WFH work pass to even enter the completely dark city, with the exception of candlelight in a few windows - having to traverse through downed trees in the road, some of which had completely smashed cars - and it was eerily quiet.  For some reason, I'm not sure why, I remember one brand-new silver Z28 - completely smashed by a tree.

Twisted steel beams where buildings used to be, matchsticks of wood where houses used to be - damage caused by the spinoff tornadoes (of which there were 12).

Ivan was a "slow" 3 - which can be almost as damaging as a 4 or 5 - "slow" not referring to the wind speed/power, but meaning it the hurricane didn't pass through/over quickly - it just kind of "sat" on Pensacola for a day before it moved on, causing spinoff tornadoes - which caused extra damage.

So I first checked my apartment, considering the hospital was at capacity - which miraculously had taken no damage, though most of my neighbors did.

In fact, I've written about that before - my apartment not taking any damage at all, despite a wobbly tree that sat right in front of my balcony, that before the hurricane, I was sure would fall first.

I identified with that tree, thinking that wobbly tree that would fall if a storm every came - but it didn't.  Instead, because of it's wobbliness, it was flexible - it swayed with the wind, but did not break, like the others - in fact, it was one of only 3 trees on the property that did not fall :)

However, most of my neighbors had also left, to at least stay with friends in houses rather than apartments - but I remember one neighbor was home - the large former rugby-playing husband of my neighbor across the hall, whom I rarely saw,  literally rocking himself on his balcony, completely checked out, didn't even answer me if he was okay.

He looked physically okay, and I'm not sure where his wife and their daughter were, at that moment, but I left a few supplies for them nonetheless - toothpaste, toilet paper, canned food, water ;)

There was no electricity, and no phones (before cell) - and it was about 100 degrees, so I slept on the balcony - and I brought the van straight to the hospital the next morning, to bring the supplies to my team, who were shaken, but still powering through, sleeping on air mattresses - and telling them to go home, I'd relieve them.

Then I typed report after report of people dying, not just from injuries, but from lack of medication for heart disease, insulin for diabetes, etc. or  electrocution trying to remove limbs from electrical lines despite standing water.

It became difficult to type, I had to walk away a few minutes every so often - and I think I smoked more than I ever have in my life, those few days - but I powered through.

And I thought, "If it's this rough for us, as transcriptionists - I can't even imagine what the nurses must be going through."

But I also remembered still finding absurd stuff to make us laugh during stressful times - you have to.

Then I saw the videos that let us know, followed shortly thereafter by the song and dance videos, which made me smile :)

Then they were met with backlash - mostly by the political right - for why these people were singing and dancing and goofing off in what appeared to be "empty hospitals" - stating this was "proof" that they weren't busy and the virus was a hoax.

First of all, you would have to understand the emergency protocols for hospitals, what wings are quarantined, what units are are on standby to fill next, going up in levels.


Secondly, there are many goofy things medical staff do to relieve stress, spread positivity, boost morale and cope with trauma - and none of them should be used as "proof" they're not busy, taking their jobs seriously, or that the virus is a hoax.

Helloooooo, that is what the show M.A.S.H. was all about?!?

Interestingly, nobody says these things about male soldiers' videos of them goofing off in the desert in between missions, to relieve stress - just nurses, a profession still largely filled with women :/

I say, do what you need to, to get through it, ladies and gentlemen -  - cry, laugh, sing and dance, sleep in the corner for 10 minutes - no judgment from me - and once again, thank you :)

(*Despite the thumbnail, rest assured the actual nurses and other healthcare workers are wearing masks and gloves in the actual videos  - when they had them - some were made several weeks ago, when they ran out/didn't have enough).