As most Kentuckians know (and the country, if you read the NYT and WaPo), the protest that began in Louisville on the same day as Minneapolis was not only for George Floyd, but also for the shooting or Breonna Taylor in March 2020.

Today, one of my favorite neighbors (no picture or name for privacy) was out going to his car for a minute, as I watered flowers on my balcony, so I hollered at him and we chatted for a minute, talking about the state of affairs.

Aside:  Well, I love all my neighbors in THIS building, they get as fired up about this sh*t as I do, including Ms. C, whom we have a dedicated parking space for that no one touches, because she's been here forever and is near 80 years old, a former business owner, drives better than I do, is more active and exercises more than both Mark and me put together, is a Catholic like Mark, and can't stand racism.  She also loves birds and flowers, like me :)

The neighbor I saw today is former marine, currently a basketball coach for a big private Christian school in Lexington in exchange for partial tuition for his 3 sons (that has shared custody) to attend, and is also a sports personal trainer and security/fence installer for actual income.

He literally works nonstop to make sure his 3 young sons can attend that mostly white private Christian school and have what they need, as well as continues to hellp his ex-wife, if she needs it, on occasion (who is also a wonderful, loving, hard-working person).

He was unusually subdued, and seemed extremely sad and tired, on his way to work.   I asked how he was doing.

He informed me that his cousin was Kenneth Walker - the boyfriend of Breonna Taylor.


For those who don't know, Louisville was the 2nd city behind Minneapolis to begin protests and rioting - because it wasn't just about George Floyd, it was about the killing of Breonna Taylor by Louisville Metro Police in March. 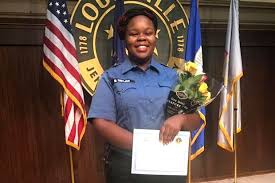 Breonna was a much beloved EMT in Louisville/Jefferson County, who was shot 8 times in her bed, by the Louisville Metro Police Department during COVID-19 quarantine, in March - after police in plainclothes burst in her home, with guns drawn, and without announcing they were police - during a "no-knock warrant" police entry warrant, looking for an ex-boyfriend of hers for suspicion of drug-trafficking. 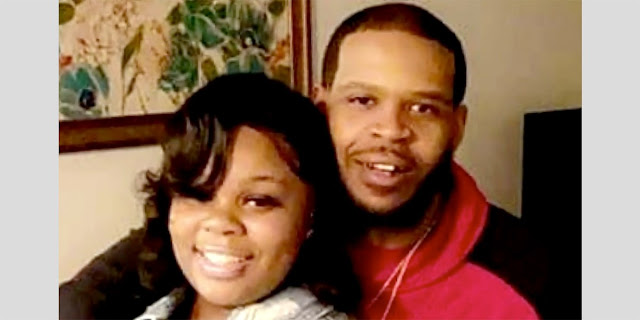 Her current boyfriend, Kenneth Walker, did not recognize them as cops - as they were in plainclothes and did not announce they were police.

Believing them robbing intruders, attacking in a rough neighborhood, he shot at them 6 times, hitting an officer in the leg, to which they responded by firing multiple rounds - sending 8 bullets into Breonna, while she simply lay in bed.

Still not recognizing they were police, Kenneth called 911 for help and said:


"I don't know what is happening - somebody kicked in the door and shot my girlfriend."


This call was recorded.

However, Kenneth was arrested on charges of "attempted murder of a police officer," among other charges -  despite having a license to carry, as well as the fact that Kentucky is a "Castle Doctrine/Stand Your Ground Law" State - meaning that in the State of Kentucky, you can legally shoot a threatening intruder in your home, as long as you have a license to carry - which you can only get if you are NOT a felon (which Kenneth is NOT).


Nothing at all happened to the cops whatsoever - no charges, no firing, no disciplinary actions - nada.

Kenneth was later released after both public outcry of him being well within his rights according to Kentucky's "Castle Law" - particularly since the police did not knock, were in plainclothes, and did not announce they were police - as well as COVID concerns, and the charges were dropped against him earlier this month; however, his attorney informed him that charges could be brought up again by the LMPD.

Taylor's family has filed a wrongful death lawsuit against the LMPD on May 15th, and on May 28th, the FBI announced they would be investigating the incident.

However, the NRA curiously remained silent - and STILL remain silent - despite the fact that they have invoked Castle Law/defended the gun rights of white others in similar situations.

My neighbor, who is a Christian (his sons attend private Christian school and he is the basketball coach) and a former marine, said the following:


My Neighbor: "I'm exhausted. With work and with all this, I'm exhausted - because it doesn't matter what we do, it won't make any difference."


"Take a knee in prayer or before the flag, sit, stand, lie down, march, even riot - nothing changes. Those with wealth and power, who control it all, will flip everything we do back on us, make us the villains and their enemy, no matter what we try to do. Take it and shut up or you're an American enemy, the enemy within."

"You know is Kenneth Walker? He's my first cousin."


Me: "Oh my God, L - I am so SO sorry - I'm sorry about all of it. I don't know what to do from where I am to help. We'd be out there with them protesting peacefully, right along with them, if we could."

"Mark's been in the car with friends in Detroit, after Lions games, who were stopped for literally no reason and roughed up.  I've seen friends profiled and harassed when living poor myself."

"But we can't help protest, because of COVID-19 and Mark's health, his stroke/heart device. So I don't know what TO do but pray."


My Neighbor: "I can't afford to, I'm lucky enough to have work, right now, when so many don't."


Me: "Right? Me too. All I know to do is pray, but I'm not sure how to pray anymore. And quote Genesis 50:20" What was done to me for evil, God, in turn, will use for good for the saving of many lives" and hope that's true someday."


"I can't do anything, either, though I'm white, because I'm not wealthy and powerful. Anytime I ever have, all I have ever accomplished is just getting the crap kicked out of me. Apparently, you gotta be Taylor Swift to even make a dent and get shit done, nowadays :) "

The he stomped his foot, like an "Amen," and laughed - hard lol.


It was good to see him smile and laugh for a minute :)

My Neighbor: "Right? That's what I'm saying!  Only wealthy people with power get a voice, the system's way wrong. I hope when all this clears, if there's no justice, it will at least expose that the wealthy and powerful on both sides of politics are enabling this broken system."

Me: (Lamely) "I don't know what I can even say, at this point, that would help.  Except I am SO sorry about what happened to your cousin and Breonna. And you know, you need sit down once in a while, you're always going here and there and everywhere."


My Neighbor (giving me a little smile, looking down): "Thank you. I can't, but thank you."


Things I thought to myself but didn't say/share:

"I once pieced three jobs together during the recession trying to do the same, 90+ hours a week. The jobs were as physically demanding, but they were at minimum wage - and all I accomplished in doing so was never being home and exhausting myself and absolutely no credit, appreciation, raises, or promotions for doing so - it didn't save me financially."

He's doing what he can.

And unfortunately, that's all we can do.


"Whenever I have tried to speak up about dysfunctional, broken systems - about injustice, power abuse, and bullying - I'm gaslighted and dismissed as a mouthy, crazy Karen - and tack on "anti-Christian" and "anti-American" now."

"So I know in some small way of what that feels like - that in and of itself is traumatizing. You can't even say "No, don't do that please," with sugar on top, or you're the enemy or "Please, help me," or the order of events gets flipped back on you, even if self-defense. And God help you, if you try to fight back, with no other recourse."

"I have a very keen eye and a very strong BS detector, and sometimes notice what others don't, which is both a blessing and a curse. Thus, I was labeled a long time ago, by some supposedly "good Christian Republicans," in this community, which unfortunately included some members of my own family."


"My fellow liberals won't really take a look at how dysfunctional it all is, because they still benefit from it, to a certain degree, plus they have their own lip-service with blind spots, lacking in mercy/compassion, too - they don't really get it, either. Thus, I literally feel like I'm now voting for the lesser or two evils. I mean, look at Minnesota's governor, or the Minneapolis mayor, or even Biden. They don't have a freaking clue."


"Who puts on an official medical report "potentially chemical substances may have led to his death"? They have no proof of that at all, that takes weeks - that's extremely irresponsible to make that assumption."


"So nobody gives a shit what I say or do, especially in THIS community - it's enable their broken, BS, dysfunctional family system or get the shit kicked out of you and your reputation, especially as a woman - and if you're not willing to get down in the gutter with them, best to just walk away and let people talk."

"Most of them know, now, that I was telling the truth and was right, but they'll never admit it - sometimes even to themselves."

"In fact, most of the time, it only makes those people more angry and hate me more, when I'm right."

"Because then they'd have to admit that what I said about them, personally, was the truth and right, too ;) "