Reply from Senator McConnell, Then My Reply


I wrote Senator McConnell (staff?) about a month ago, regarding my concerns about COVID and lawsuits being filed.

(Aside:  In the meantime, I smiled to myself, when I saw a very well-respected, influential Lexington couple - who were very active at Christ the King Catholic Church (his brother was a priest) haul off on McConnell in the local newspaper as a guest opinion.)

McConnell just now replied to me (Rand Paul never has, other than to send me his lame newsletter all about how awesome he think he is) ... 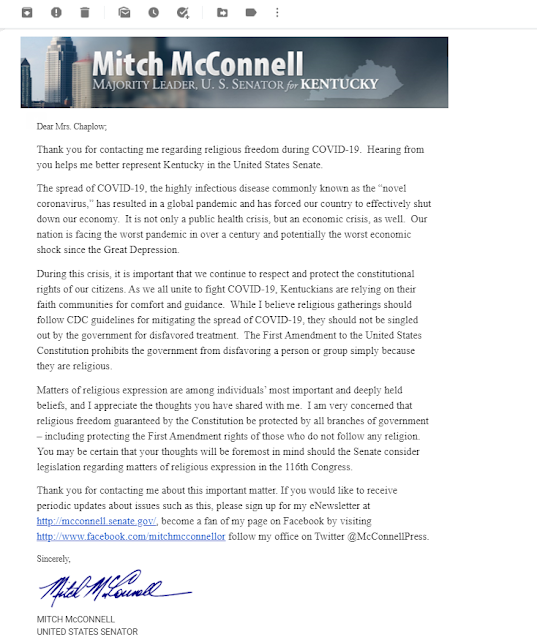 Here is my reply  - forgive the typo - I put the missing word in parentheses when copy/pasted it here.

Since I proof/edit all day for a living, I take off that hat for personal communication, especially since I don't get paid and don't have time.  Thus, emails and texts are like post-it notes to me, I just scribble something down on them and go back to work ;)


Dear Senator McConnell (or whichever member of his staff is writing on his behalf) ,

I'm a Christian and churchgoer myself and I didn't feel "persecuted"in the least, nor that my religious freedom was being restricted, so that's the thing - no one was being singled out because of their faith, they were singled out based on defiance of emergency protection laws put in place for public health and safety, which you would think would be laws that both sides of politics would agree on.

In fact, that's the reason we even have laws, to protect ourselves and others from harm - it's just we can't all agree on just who and what should be protected and how.

However, on this one, public health and safety,  I would think that the Republican Party would agree, considering (your) main argument against Muslim extremist terrorism, abortion, and LGBTQ, has been societal protection from these harms.

Thus, I am left wondering whether these arguments were less about protecting society and more about money and social control.

it appears to me that the new GOP is changing the definition of law from protecting the public and more about protecting just individual civil liberties - despite the fact that other people's civil liberties can and will cause harm to others., such as with this virus.

You know, Republicans and Democrats used to be like a balanced marriage - one reined the other in if they went too far.  Now it's like a bitter divorce - and it appears you don't care, as long as your party's in control.

That really doesn't bother you?

See?  I behaved myself.