Politicization of a Deadly Virus: The Neoconservative Push to Liberalize/Redefine The Definition of Law, Especially With Regards to Public Health and Safety

Under pressure from Trump Republicans to reopen businesses, Governor Beshear has agreed to progressively reopen some businesses, in our state, in stages.

Since that time, the coronavirus count jumped from it's plateau of under 150 a day to an all-time high of 260 a day, yesterday.

What I find interesting is how short-sighted Trump-style Republicans are - not only with choosing money over public health, but apparently having no problem whatsoever with forever becoming synonymous with defiance of social-distancing laws that were designed for their own/public health and safety - despite the fact that this position will not go down well for them over time/in history.

In fact, the one thing we all agree upon is that having laws at all is necessary -  not only to prevent chaos and disorder, but to protect ourselves and others.

However, it appears we have very different definitions of what "loving your neighbor" means and who should be protected and how.  We often either interpret what "neighbor" means differently  or just don't think or care about others at all.

Thus the need for protective law, protecting all citizens from harm equally, or just from those who don't care about their neighbors.

However, once again, we disagree on just who should be protected by these laws and how.

Once upon a time, having (at least) two approaches to an issue was a good thing - it had the capacity to bring a good balance in the middle.

However, with the advent of rampant dysinformation campaigns without shame, just to win  - not anymore :/

Now, with this virus,  you would think that conservatives, of all people, would be the ones supporting protective laws, considering the fact that conservatives' main arguments against LGBTQ, Muslims, people of color, women, abortion, etc. have been "self/societal protection."

But alas, no - because in fact, it is Trump-style (neo)conservatives themselves who have "liberalized" the definition of law, to no longer be about personal and public health and safety, but just their own personal freedoms and civil liberties.

What I also find interesting is how they have done a 180, from being the most hysterical about the virus, to now denying its existence and making it political conspiracy.

For example,  you can actually trace this politically-brainwashed progression.

Here's Alvin's, a convenience store in Manchester, Kentucky, who initially posted this ... 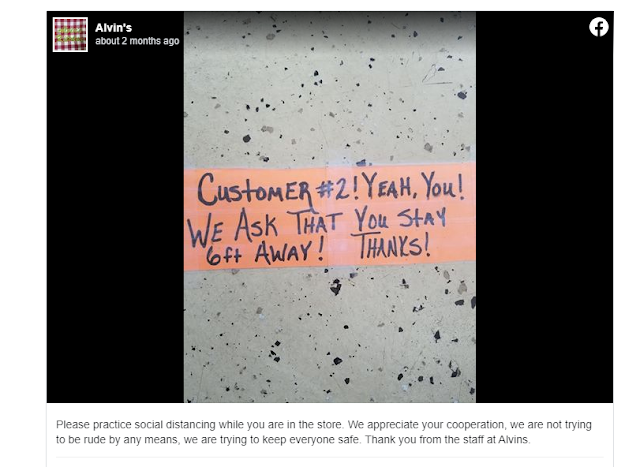 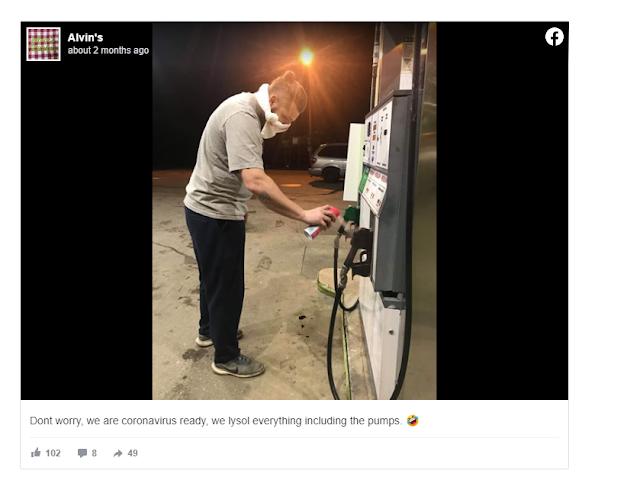 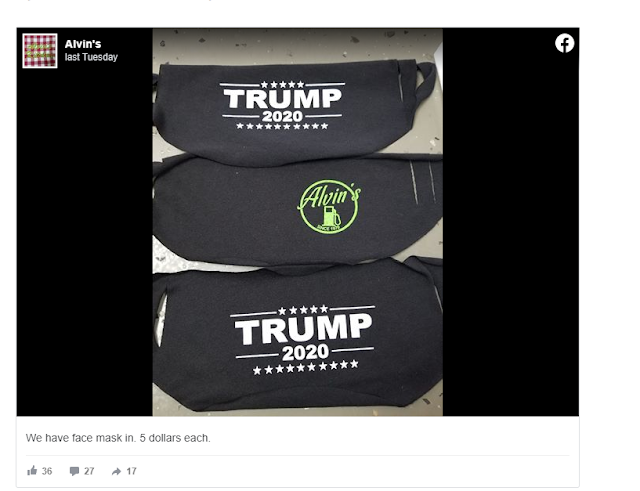 (This is the exact same store.) 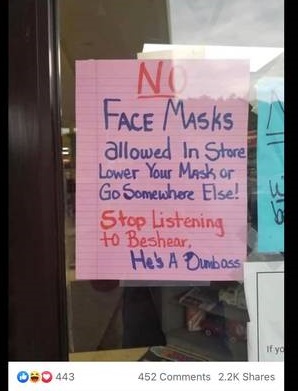 First of all - the phrase "Dumb Ass" is comprised of two words -  you idiots.

(You could even get away with a hyphened "Dumb-Ass" as one noun, since "dumb" is a dependent modifier, in this case, but never "Dumbass." )

Therefore, we will do as we always do - assume this is more projection of Trumpers' own characteristics/behavior onto everybody else ;)

Secondly, it's not just Beshear being cautious - like many other governors, he's trusting doctors and public health administrators  rather than other politicians -  AND -against his better judgment, he opened up many business this past week, just to appease you A-holes, which is already showing a jump in the COVID count.

Thirdly, if you aren't going to use common sense and think for yourselves, and instead listen to politicians instead of doctors and scientists about your own/public health  - why even bother going to the doctor at all, anymore?

(Well, Rand Paul was a doctor, but he was an ophthalmologist, who has always put his money before patient health, so -  good luck with that ;)

As for me, I WILL still be wearing my mask and gloves when in groups, thank you (pulling it down on my chin until I come upon a group or someone else coming too close) -  so I'll just go someplace else.

Perhaps I'll instead choose to patron businesses run by people who know how to spell "dumb ass," put public health and safety first, and who aren't politically brainwashed "dumb asses" - who, once again, can kiss my mask  :)