Timing, People - Feed the Good Dog Inside You The Most


The title refers to a quote from Lakota Sioux holy man and leader, Sitting Bull, and I'll get to what that means in a second, but first ...

Um - are you aware that both state and federal government advised us to stay in our homes, right now, except for necessities and emergencies?

That's pretty much what I said lol.

Then she went into, "But the interest rates are coming down" sales pitch.

I don't usually hang up on people, but seriously, what the ?

Yes, that's exactly what I need to be focusing on, right now, looking at new homes and possibly catching or spreading disease in the process, buying a new house before a looming recession, so that I can properly dig myself a new credit hole to fall in, after I just climbed out of the last one, all so that YOU can make a quick buck.

Now, look, I understand wanting your business to continue, and I'm doing my best to support local business,  during this time - but let's do that responsibly and not predatorily, shall we?

Then, I was later sent emails by their office stating, "Our hearts go out to anyone affected.  If you'd like to buy a new home, we're here for you."

Oh, puhleease, you don't give a damn about us and what's safe, or you wouldn't be asking people to come look at homes, right now, possibly catching/spreading the virus OR whether buying a new home would put people further in debt, despite a looming recession - you just want a sale for yourself lol.

No worries, I didn't say any of that - but I did think it.

I mean, it just seems manipulative and almost predatory to me, right now?

Though things are chaotic, and I think we should give each other more of a break than ever, on things said/done when stress and emotions are high -  on the other side of that coin -  let's balance that with recognizing there's a proper time and place for certain things, and we can start by asking ourselves, "Is now the right time for this?"

There's a way to try to keep your business afloat AND be socially responsible, and to not take advantage of the situation.

You can tell the difference between sincere and insincere businesses saying things like that, because the sincere ones will also reassure you in efforts they're taking to be socially responsible, as well as not try to sell you on non-necessary things that are not in your best interest, right now.

Employers may say the same about "being here for you," but here's how you can tell whether or not they're sincere - their actions speak louder than their words.

Not only will they tell you exactly what they're doing to prevent infections, but offer to help you any way they can and actually do that.


I'm lucky that I have 2 gigs, right now, especially in a dying, competitive field - and have finally found 2 ethical, professionally-behaving, non-cut throat, non-"throw each other under the bus for a buck" companies to work for (but I kissed a lot of frogs to get here :)

Though the first gig's work nearly ground to a halt (only emergency appointments), they bent over backwards to accommodate us and support us during this time - again, their actions were louder than their words.

They don't just talk the talk, they walk the walk - what they say they'll do, they do, to help us - they're going above and beyond.

I personally voluntarily stepped back from that first gig,  to make sure what work did come in was for people for whom that was their sole source of income (because I have two, plus a husband), as well as I recommended setting up a donation fund for those people who won't be able to make ends meet, we all give what we can each month to it, and they're trying to set one up as we speak, like a monthly pool, they can offer to the most needy that month?

(Because I've always said when I was even in a slightly better place, after struggling so much during the recession, I would help.  Slightly better only is right, but better enough to help where I can :)

Hey - we've got to help each other, where we can, and not wait and leave it to everybody else and the government to do, right?

During crises like these, we often may see both the best and the worst of humanity - acts of abject selfishness as well as incredible acts of compassion and unselfishness - thus, you have a choice. 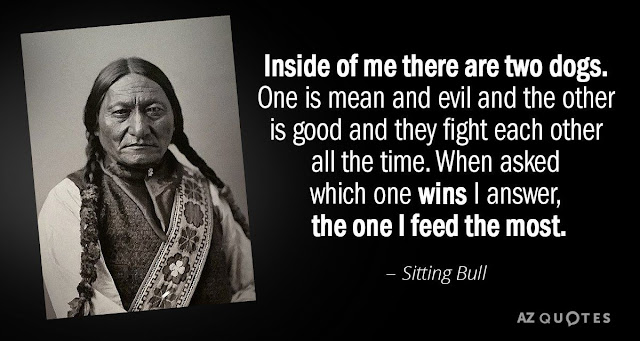 So do we want our species to survive or not?

Feed the good dog inside you!

It isn't helping anyone's panic level, and even that seems a bit predatory to me, trying to sell you on party political narrative in the midst of a public health crisis?

Like I'm dumb enough to go, "Dohkay,  you're saying Political Party A literally sent and caused the virus so they can profit from it, and that MUST be true, simply because YOU said it, and YOU know, so I'm going to join YOUR political party, right now, because we can only trust YOU and YOUR political party to save us." lol

It's actually slightly insulting, like they think either think you're less informed than they are, a complete dumb ass, or just gullible or easily manipulated; or worse, they are trying to take advantage of catching you at a vulnerable moment, thinking you might be swayed by what they only imagine are their superior skills of persuasion - though it's total bullshit and you actually critically think and read and decide independently for yourself.

Just smile and change the subject, or slightly tap them by asking them to cite their sources for that information, if they get too aggressive.

People that are overly focused on selling you one political party or the other, during this crisis, are predators - virtually no different than predatory scammers, right now, taking advantage of people's panic, catching them while they're vulnerable - so they can sell them bogus products or ask you to donate to fake donation charities to help the victims.

Now - having said that,  I get the concerns of government overreach to a certain degree - but actions like this one, by one of our state lawmakers, wreak of taking advantage of our vulnerability, right now, to make things unnecessarily political.

It's not so much her point, because she could be right about government overreach - but her timing?

To actual encourage people to sue the state government, this soon, when we're still trying to keep people at home and safe - especially when we just passed unemployment expansion bill, both the state and then the federal government - is going too far.

Like I said, it's not so much her point, because she may be right, who knows - but it's her timing - it sets off predatory, political-power-hunger alarms.

It just wreaks of: "I don't care if people are protected from the virus, I just want my political party in power and my own freedom/civil liberties."

I'm sure there will now be 1000 lawsuits later, and some may have legitimate concerns.

However, I can also see where the courts would just argue: "You know what, you're alive and well because of emergency actions the government took, for you to even be able to file this lawsuit," too.

Who can say and we shall see.

What I DO know is this - we can't have it both ways, people.

We cannot demand more government action/ protection, then bitch about it, when they do it.

"Rep. Savannah Maddox, R-Dry Ridge, has filed a floor amendment to her own House Bill 322 that would gut the contents of the bill and replace it with new language adding limitations to the emergency powers of Kentucky’s governor.

On Wednesday, responding to a flurry of critics on Facebook, Maddox added: “At the onset, I thought the Governor was doing a great job handling this situation. However, using the force of government to close 2/3 of Kentucky’s private businesses and picking winners and losers among said businesses is a different matter.”
The co-sponsor of the original HB 322, GOP Rep. Jerry Miller of Louisville, said on Wednesday that he has nothing to do with Maddox’s amendment.

“Savannah is the purest libertarian we have in the House, so with that in mind, it makes sense for her to file this sort of thing,” Miller said. “Her base is the Northern Kentucky Tea Party folks. From a purely libertarian viewpoint, I mean, I get it. But now’s not the time.”

The floor amendment Maddox filed last Thursday would instead require a governor’s emergency orders during a “disease outbreak, public health threat or similar occurrence” to be “narrowly tailored towards meeting the exigencies of the emergency,” “no broader or burdensome than is necessary,” “actually issued in response to an emergency or immediate threat of an emergency” and “in effect no longer than is necessary to meet the exigency giving rise to the emergency.”

“Any person adversely effected by an emergency order may bring an action, individually or as a class action, for declaratory and injunctive relief, in the circuit court in the county in which the person resides or in which the person’s affected business is located,” the amendment states.

Circuit judges would have to hold a hearing within seven days — notwithstanding any other emergency orders largely shutting down the court system, such as one presently in effect — to determine if the governor had erred.

What happens if a governor oversteps those boundaries? Kentuckians could sue.

C'mon, people - let's feed that good dog inside you and just fix the problem, right now - plenty of time to play the blame game and sue people, as is the American way, later lol  ;)