Once Upon a Time, My Faith Was Dependent on How Other "Christians" Behaved ...

... but I thank God that I learned, a long time ago, to separate Christ out from most Christians - and that if my Christianity were dependent on how most self-proposed Christians act, especially today, I wouldn't be a Christian anymore  - and that Christ is nothing like most of the people that claim to be Christians :)

My therapist gave me some links to some Christian bloggers a few days ago, I've been checking out - and by that I mean Christians that don't support Trump's very ugly, very anti-Christ political narrative that's being supported and enabled by so many self-purported Christians, in Christ's name.

Thus, tonight, I just dropped some really "ugly" people off my blog reader and bookmarks.

Not physically ugly, of course - ugly in soul -  despite claiming to be Christian.

There's only so much "ugly" you can read from people - especially those proclaiming themselves to be Christians - before your soul grieves, ya know?

Like I said, my therapist gave me the links a few days ago - but I made the decision to drop these people off my radar entirely, after reading a comment by someone who still reads my blog (site stats) and almost seemed to be specifically zoning in/targeting my specific point in the two posts prior to today, nearly using my same language about the "17-year-old with an illegal assault rifle"-  except he was praising the boy as some sort of hero, and calling the people he shot "vicious attackers" -  when that wasn't what happened.


IMO, I think what happened in the Rittenhouse shooting situation was a pretty clear-cut case of both sides misinterpreting/misreading the intentions of the other side, which escalated the situation out of control - both sides considered the other side a threat and may have "jumped the gun" - quite literally.


*HOWEVER* - considering our country's recent history of young teenage boys being mass-shooters - if an untrained 17-year-old boy suddenly showed up in MY neighborhood with an illegal assault rifle -  white, black, brown or whatever - I'd probably think he was an active shooter, too.


Regardless, the order of events is important here - and no one tackled or "attacked" Kyle until AFTER he'd already shot Joseph Rosenbaum, for yelling at him to leave their neighborhood and throwing a plastic bag.

The last time I checked, yelling at someone to leave your neighborhood and throwing a plastic bag is NOT a justifiable reason to shoot and kill someone - and I don't blame anyone for tackling him and trying to get the gun away then.

This is why Kyle is charged with homicide.

(And I dare say that the same people making a hero out of Kyle would being saying the same thing if Kyle was a black kid, in the same situation.)

Now you know dang well, if a kid showed up with an assault rifle to a school or concert hall or picnic, he'd be under suspicion for a mass shooter immediately.

And then if he shot someone for telling him to get out of there/threw a plastic bag at him, people would of course tackle him to get the gun away - and no one would be calling it a "vicious attack" - they'd be making a hero out of the people who tried to stop him.

There were no easy answers to this one, people panicked - as they often do with guns  - but this commenter imagines himself as having one anyway - even though he has the order of events wrong, either because he doesn't know them because he's in Australia, and gets his information only from right-wing sources, or because he DOES know and is not being honest about knowing Joseph was shot first before Kyle was tackled.


However - I wonder if Christ would agree with this synopsis of the situation and approve of what happened, and consider Kyle an "innocent" victim and hero, even with the story told your way?


I'm not sure what bible you're reading, but where in the gospels can it be found that you should go into other people's neighborhoods carrying an assault rifle illegally?Or shoot the first person who yells at to leave their neighbor, throwing a plastic bag at you?

Or to shoot somebody else's arm off, and kill another person, just because they tried to tackle you to get the gun away after you had done so?


In fact, as gently as I can - even outside of what Christ would do -  not only is that a grossly (intentionally?) inaccurate version of the events, but I don't think it's sane - in fact, it's alarmingly disturbing.

Because regardless of how you twist the story, I can't imagine any sane parent who'd be okay with letting their untrained, 17-year-old son go into someone else's neighborhood with an assault rifle illegally, whether he was white, black, or purple.

I'm sorry - but either some people have allowed themselves to drink so much political Kool-Aid propaganda that they can no longer tell right from wrong anymore -  or they were already pretty sick tickets  - or both.

Oh well, I stopped hoping for mutual understanding, common ground, and unity with this crew years ago.

However, this particular commenter,  I used to sometimes see Christ in, and what he had to say sometimes - but I have to be honest - I actually haven't seen any mark of Christ on him whatsoever, in a very long time.

I still checked in to see if he was okay, especially during COVID, especially considering his age.


He used to remind me of a great uncle, a WW2 vet, who used to jokingly call me a "commie pinko,"  but kissed me on the cheek at the same time.

However, I think I just realized today - my uncle, though harsh-languaged sometimes, very non-PC - in the end, he would still do the right, honorable thing -  and was actually a much more honorable, empathetic, merciful person, under all that harshness and pain and war trauma - and this guy unfortunately just - isn't.

What they don't know is, I still prayed for all of them, on occasion, any trials they'd mentioned they were going through.  I also gave them the benefit of the doubt  as much as I could, because that's just what I do - give others the same benefit of the doubt I'd like them to give me - even though they may never do the same.

And I know we all sin and fall short of the glory of God, right?

Yeah - but there's a point where it's a regular-basis thing and actually grieves your soul to have to watch, when it's not good/healthy for anybody.

Thus, I've also learned, just over the past two years, not to give so many chances/benefit of the doubt to people, like I used to.

I mean, there's just a point you just have no more benefit of the doubt to give, ya know?

Thus, I'm done caring - how they're doing during COVID, clearing up any miscommunications, misreads, or misunderstandings that happen with text-only communication via social media, and trying to find common ground with people who aren't interested in your perspective unless you agree with them, vilifying/demonizing you as the "enemy," just because you don't agree with them politically.

I tried - I have listened to their perspectives and given every benefit of the doubt I could, but after this sick narrative on Kyle Rittenhouse, I have no more excuses to make for them.

Because they're aren't any good reasons or excuses for them anymore  - they're just a small group of self-righteous, arrogant, hateful, miserable old assholes - and they've mistaken misery loves company for meaning they're "right."

I'm sorry, but - I don't want to become an arrogant, miserable, self-righteous old asshole in Christ's name - assholes who have become increasingly paranoid, dark-hearted, and merciless, as well as sounding less and less sane, as time goes on - only they don't realize it, nor that they're bringing out the worst in each other.

That negative energy is contagious - and I'm quite sure it's not from Christ - no light, no love, no good will, and no mercy and heart of Christ coming off them at all - so I removed them from my reader and bookmarks.


In fact, the only "evidence" that they are fellow Christians at all is occasionally mentioning they are, railing against about LGBTQ, abortion, and feeling persecuted by non-Christians.  And I don't mean sometimes "falling down" and sinning, like we all do - I mean, chronically ugly people.

Not only nasty rhetoric like Trump, but stuff like intentionally trying to personally provoke/create strife/upset people/get reactions, either dishonesty or enabling dishonesty, and putting down/making fun of others nearly daily, rarely showing empathy, mercy, or benefit of the doubt - just to feel/look superior to each other - all done in Christ's name.


I mean, they make me not only lose hope in humanity, but almost "lose my religion," as the Southern saying goes - and I don't want to lose my religion lol.

I hate to say that about anyone, but I'm not Jesus - and they just make my soul hurt lol :(

I'm pretty sure they're the sort of believers that Jesus was talking  about, in Matthew Chapter 7, who will approach Christ in the afterlife and say ... 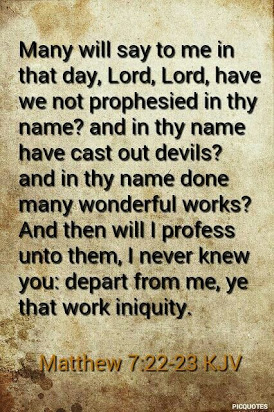 By the way, despite newer translations changing the word "iniquity" to mean "sin" or "lawlessness" - that's not what the word means.


But who knows - like I said, that's for Christ to sort out, I have enough of my own issues to worry about :)

But you know what the good news is?

When you view these types of "chronically ugly-souled Christians" - it makes you appreciate Christ himself even more :)

It makes me MORE grateful to God, Jesus, and the Holy Spirit - for not even remotely resemble these people lol.

However, I know they still read me - so I'd just like to say this to them ...

That if Christ even remotely resembled who you people have proven yourselves to be on most days - I'd never want to be a Christian.


You're lucky - because though I'm strong enough in my faith not to turn away from Christianity because of your chronic lack of mercy, arrogance, dishonesty, and general ugliness towards anyone not exactly like you (or who doesn't fit your OT-law checklist "do's and don'ts" version of Christianity, negating Christ's grace) - unfortunately, not everyone can separate out the Christians from Christ and Christianity itself.

Thus, you have no one to blame for people leaving the churches in droves but yourselves - because it's 'merciless servants' like yourselves, who are responsible for causing so many others to stumble on their way to Christ and leave the church..


And you know what Christ said about being responsible for causing anyone to stumble on their way to Christ, right? 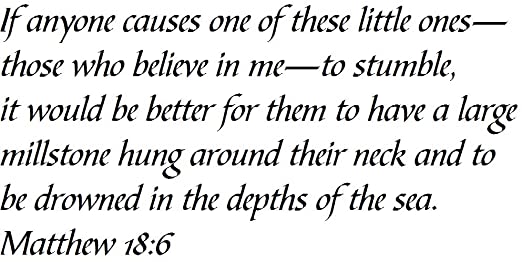 Buh-bye, former fellow "Christian" bloggers - I hope you're as right and righteous as you think you are - for your own sakes :(