Don Quixote Trump Vs. The Post Office and Kamala Harris 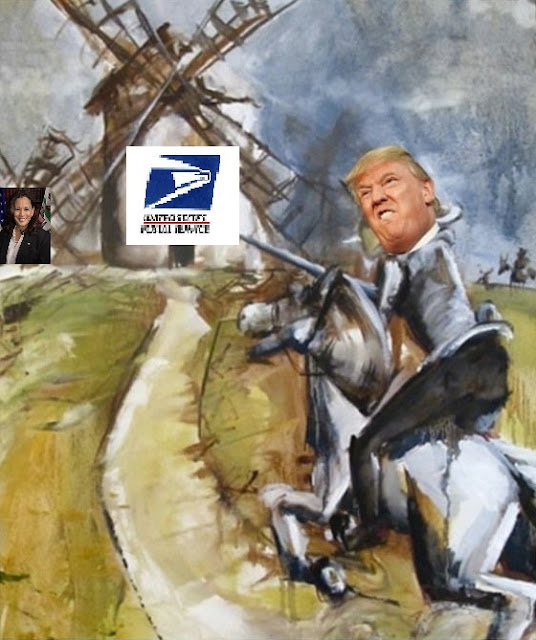 So let me get this straight ...

(Let's pause here for a second - erm - Florida hasn't been safe for voting, via mail OR In person,  since the 2000 election.  And if Trump says something is safe, that's pretty much a big red flag, to me, that whatever it is, is most assuredly NOT safe lol. )

Then yesterday, in another 180, he threatened to withhold emergency federal funding for the USPS overall, admittedly as a "bargaining chip" with Democrats over the stimulus and his own fears about not getting re-elected?


Pretty sure that's exactly what he was accused of during impeachment -  withholding emergency aid to the Ukraine for his own re-election purposes, isn't it?

Which he claimed he did not do.

This is exactly the same thing, just domestic -  withholding aid to the U.S. postal service aid for his own re-election purposes - blatantly done in your face -  because either you didn't care, or were that ignorant/brainwashed, the first time.

I can't say it any better than this guy did:


“The president of the United States is sabotaging a basic service that hundreds of millions of people rely upon, cutting a critical lifeline for rural economies and for delivery of medicines, because he wants to deprive Americans of their fundamental right to vote safely during the most catastrophic public health crisis in over 100 years,” said Andrew Bates, a spokesman for the Biden campaign.

Still okay with this Trumpers?


Still thinking the man is sane?

Exactly how much of Crazy Kool-Aid are you willing to drink?

Also, may I just ask why Trump has only accused politicians of color of not being born in America (like he did Kamala yesterday)?

Or of not being legal immigrants and/or telling them to "go back to where they came from?"

FYI, Kamala's birth certificate is public record - proving she was born in Oakland, California in 1964 to LEGAL immigrant parents.

Well, Trump got away with this trick the first time with Obama, why not try it again - despite the fact that Kamala has openly shared her birth certificate?

But Fox News/Breitbart watcher don't check/don't care about facts and proof anyway, and they're not going to tell you about facts that DO exist to the contrary of what they're saying.

They figure if they say a lie enough times, it makes it true - and  it does work with many people - particularly people over 65, for some reason we haven't figured out yet, other than they don't go out and mingle as much and love being scared to death about the fate of the world.

What does Kamala have to do, have her birth certificate blown up to wall-mural size and carry it everywhere she goes, to prove him a liar? lol

(No, people will still say it's fake, just because Trump says so.)

Additionally, the memes being passed around with a picture of Kamala with an Indian couple supposedly as her parents is false.

These are Kamala's actual parents ...


Dr. Donald Harris (PhD) is a Jamaican-American LEGAL immigrant, a former Fulbright scholar, and a Professor Emeritus of Economics at Stanford University ... 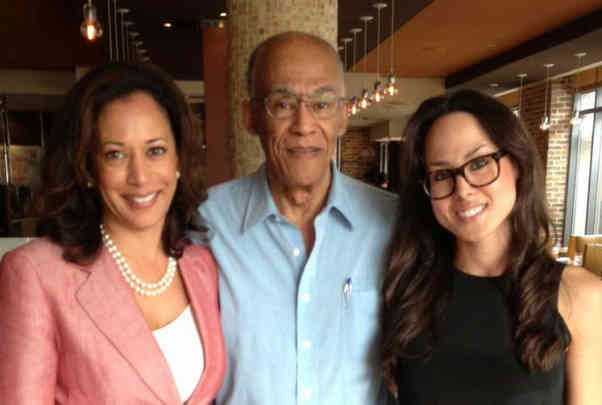 Dr.  Shyamyala Gopalan Harris (PhD) was a Indian-American LEGAL immigrant  and top breast cancer researcher at UC-Berkeley, who helped identify the hormonal roles in breast (and other types of reproductive cancer), before passing away in 2009 (colon cancer). 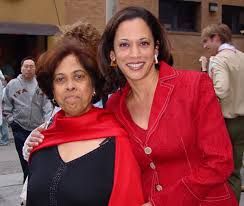 Lastly,  the Kamala "quote" meme being passed around with her supposedly saying she'd "punish" Trump supporters?

That is because Kamala never said it - anywhere, at any time.


No, nobody wants to "punish" anybody that supports Trump - only people anyone who committed an actual crime - which IMO, includes "serial cheater" Trump himself.


However, I will say that we will remember the corrupt politicians who continued to support him. and that their days are numbered as far as political careers, but simply by voting them out.And personally, I'll just say that until the last four years, I have never cared what someone's politics were as a prerequisite for close friendship, I just distrusted politicians themselves - especially Republican politicians, since the Iraq War lies.

However, there has been a definite significant shift in my personal trust level - now, I don't distrust just Trump and/or Republican politicians, but Trump's everyday voters/supporters, too.

Not because of my politics - - but because you have allowed your politics to brainwash you to believe that I'm your "evil, Godless enemy" - because I'm a Democrat (despite also being a devout Christian)  - and that's just not safe for me.

I mean, that would make me like a Jewish girl trying to hang out with Nazis - how safe is that? lol.

(I already feel like the Jewish girl in my own Nazi family -  why would I choose to hang out with [people who think every motivation I have is dastardly and evil, and I'd never get the approval of? lol.)

Also worrisome is the fact that you're basically admitting you're okay with the following:


1.  You're okay with dishonesty, abuse of power, possible collusion with other countries and cheating to win elections -  as long as it's a Republican.


2.  You're okay being dangerously socially irresponsible by spreading lies/disinformation/false propaganda - about people, about races - even about the dangers of global pandemic like COVID - just to win an election.


3.  You're okay with political corruption - as long as it's a Republican.


4.  You're okay with deception, treachery, and below-the-belt nastiness - or at least you'll look the other way -  just so long as the man makes YOU money and supports anti-abortion and anti-LGBTQ.

Well, I'm NOT okay, with any of that -  regardless of what political hat someone is wearing.

God knows I've met plenty of personalities, on BOTH side of politics like this, including a couple of members of my own family - and I'm never okay with it.

Y'all are straight up, openly voting for fraud, immorality, deception, and corruption - right out loud, in front of God and everybody.

I'm NOT okay with the immoral levels you're stooping to supposedly "preserve morality" (defined only as abortion, LGBTQ?) and to win elections.

The immoral levels you're stooping to obtain so-called "Christian morality" - which you apparently define mostly by sex/reproductive laws -  negates itself, and is actually eroding Christian morality - do you not you realize that?

Thus, I have learned, these past four years, who you are at your core, how low you're willing to stoop to get what you want - AND that I'M not safe around you, because you've allowed yourself to be brainwashed to believe that I'M "the enemy," because I'm a Democrat.


Regardless, I still I don't see you as my "enemy," and I have no interest in punishing you or anyone over it, because I'm just not a very vindictive person, I just walk away (unless an actual crime has been committed).

However, what is true is that after these last four years, I'm afraid it's true that I could never be close with Trumpers again - mostly because it's not safe for me, as a Democrat, that you've labeled your enemy - and also because you've put your stamp of approval on deception, corruption, and how low people should be able to stoop to win elections - sorry :(