For My Husband, Mark: Just A Little Sunday Morning Stevie Wonder For Ya

Stevie Wonder live from Motown yesterday, where both he and my husband grew up - at the Biden campaign speech with Obama :)

(Yes, it was outside, everyone wore masks, and were socially distanced as best as possible.)

This is for my husband to refer to, over the next few days - and likely in coming weeks - to help remember his smile - and for anyone else reading, just in case you've misplaced your joy, your hope, and your faith in humanity, during this election (or for the last 4 years?) - don't let them steal your joy! :)

If you're looking for "Superstition" - which is my personal favorite Stevie Wonder song (it all about that bass) - it's at time stamp 32 minutes - with the words changed to match current affairs lol :)

Stevie's voice is doing just fine, despite a recent kidney transplant, isn't it?

In fact, some frank and powerful words from Stevie Wonder, before he performs, too: "Yes, I pay a lot of taxes, I do. But you know what? If I have to pay a lot more, I don't mind that, if that's going to stop a starving child, stop a person from dying."

This was clearly not just referring to Republican tax complaints - even though Biden has said repeatedly his tax plan would only affect your personal taxes if you made a profit of over $400,000 per year - and most Americans don't - but also wealthy black rappers like Lil Wayne and 50 Cent recently jumping on the Trump train, admittedly over nothing more than higher taxes for people who make over $400,000, despite "Trump not liking black people" - and the fact that most blacks don't make even close to that figure. 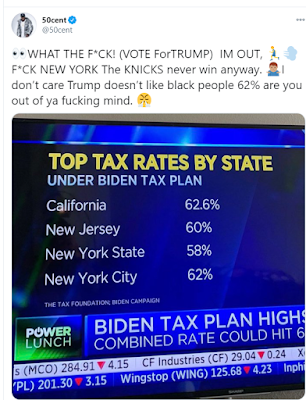 Ex-girlfriend Chelsea Handler took her favorite ex-boyfriend to task (as did many others), stating she would happily pay his taxes for him, if that was the problem - reminding him that BLM means him, too -  so he has sense changed his tune, stating the tweet was a poor moment, in realizing what that means for people in his tax bracket - again, over $400,000 a year - but then realized most black people are nowhere near that tax bracket, and that racial injustice is a bigger issue than just himself and his money.

Otherwise, unless actually some shoots someone else, over the next few days, nothing surprises me anymore - so I don't plan on posting politically, because essentially, everyone's already decided where they're going to be on this, and other than voting, I have no control what happens.

Thus, as a likely last statement of appeal to America, I'll essentially just echo Stevie and Chelsea and say this, regardless of your skin color, if you still haven't voted yet:

Everything is not all about YOU - just YOUR money, YOUR health, and YOUR justice.

THAT is what's actually wrong with this country - greed, arrogance, materialism, and selfishness.

In fact, we Americans have the worst 'Mine, mine, mine,'  arrogant, greedy, materialistic, shallow, and selfish reputation in the world, for legitimate reason - we've proven it repeatedly.

It's time to be honest with yourselves about why Trump appeals to you.

Because the truth is, somewhere inside, you know Trump doesn't appeal to the Christ in you - Trump appeals to the worst in you.

Not just selfishness, greed, and materialism - Trump also appeals to your fear - manipulating/controlling you with it, with propaganda and lies  - just to get your vote, to keep himself/the GOP in power.

Now, you can dress your up your politics with a cross, cherry-pick bible verses that were NOT Christ's words (and in fact are from other humans who even in the NT sometimes contracted Christ) all you like, to justify yourselves.

However, none of that will change the truth - and that truth is that Christ's actual words, and what Christ most often preached against, was nearly everything Trump supports -  and somewhere inside, you know that - as well as that you are NOT justified based on the words of Christ.

You know dang well Christ would never support anyone who regularly manipulated your fear to get your vote - Christ would support someone who brought healing, peace, unity, and fair justice, to this country -  as well as encourage support care for the sick, poor, and oppressed.

Now, we're hoping that's Joe Biden - but I understand not being sure he'll provide that, I'm not sure myself - and I can't promise you it will be.  However, Biden is a heck of a lot closer to being a healer and unifier than Trump is, with a lot more class, dignity, character, and basic human decency, than Trump has, or will ever have.

Do you not want healing, unity, peace, and equal justice too?

Or is it true that you only care about YOUR money, being in total control, and to heck with everyone else?

Four more years of stoking the flames of your fear, anger, greed, hatred, and violence, of us Democrats, people of color, Muslims, LGBTQ, and you name it, based on a record/precedent-setting presidential propaganda and dishonesty?

In fact, as much as Trumpers try to scare you to death about us Democrats, erm - WE'RE not the ones in power, for the last four years, THEY were - the POTUS, the Senate, AND the Supreme Court - we're just reacting to it!

So if you don't like this mess made in society, the last 4 years, you have no one to blame but yourselves - but you can change it - with your vote.

ANYway,  back to Stevie Wonder and finding smiles - as much as America loves Stevie, I also enjoyed watching the American Sign Language interpreter on the right side of the screen just as much, when the music starts, playing her air drums and strumming her guitar, then dancing while she interprets the lyrics - OMG, I love her!

And to top it all off, Obama does a just a slight lil' dance at the end to Stevie :)