I mean the Alec Baldwin version on SNL, last night :)

It's near the end of the cold-open clip, and it includes a little musical number  :)


LOL, the "Macho Man" ballad at the piano bit - priceless!
And this time, the Ace Ventura "Loser" bit worked, so now you're happy with Jim Carrey people, aren't you, admit it?
Oh, ya fickle fans!
Also, can I just add - that in my 51 years, I have NEVER seen people  this happy and full of pure joy, or celebrate this much - after a presidential election, for any president, even Obama, the first black POTUS (fairly close, but not this much pure joy)!
Not so much here in Kentucky overall, but in Louisville, and even here in downtown Lexington, we had ourselves car parade and a masked-up block party!

Regardless - no, the real Trump has not conceded.
Instead, he tweeted this ...

Yeah ... by really, really, a lot!
LOL
*Sigh*
It's so embarrassing that the person leading this country, for the last 4 years, has a command of English language, the grammatical skills, and the vocabulary skills of a 3rd grader - not to mention apparently the same level of math skills - because even Biden's win wasn't "by a lot."
The press did NOT decide the winner - the electoral college did - press just reported it.
Though the Associated Press did report "projected winners" yesterday, these reports were were based on official press-release statements given by the Secretary of States for both Pennsylvania and Nevada, literally moments before the electoral college officially called these states (however, they have not been certified, and will not be, until there are no more contestations.)


Had we called it then, when Trump wanted to, Biden would've won by an even greater margin, but it wouldn't have been even close to an accurate reflection of votes!
This election, with so many mail-in votes during a pandemic - which Trump has tried to discourage (suppress) from the get-go - we needed to make sure all the votes were in before the electoral college called a state (a problem in 2016) - and to do that, we had to count all mail-in votes, including overseas military votes, during a pandemic - and that takes extra time.
If you're holding on to the idea of a supreme court save because of a packed conservative court, I wouldn't hold your breath - keep in mind that Trump has thus far lost all of his lawsuits - including his petition to stop the count in Pennsylvania, with even with the most conservative SCOTUS justice we have, Justice Alito.


Alito ruled NOT to stop the count, but granted a partial win, in that he allowed Pennsylvania to increase the number of more poll watchers on both political sides - and the electoral college still called it a loss for Trump.

And in order to win his legal case, Trump would (for the first time in his presidency) need to actually provide proof of his accusations - that widespread illegal votes were counted or discarded improperly - and though there are sometimes small pockets of these in certain areas, they likely would still not be enough to secure a win for Trump.
Believe me, I know how you feel after 2016, your frustration with the electoral college - none of us are happy with the electoral college system.
In 2016, states were called for Trump by the electoral college - despite Hillary winning the popular vote nationwide by more than 4 million votes!
However, when the electoral college works in our favor, no one will address and challenge it, and thus it never changes and no one b*tches about it until their candidate loses!
This is another reason why this election took extra time to call - because this time, the electoral college wanted to make sure that didn't happen again, and that at least 98% of the votes were in before the electoral calls a state, which they didn't do last time - they still go by the most populated geographic areas, but went with the 51% rule instead of 98%.


However, unlike in 2016 - again, when Hillary actually won the popular vote nationwide by 4 million votes - it appears Biden won both the electoral college AND the popular vote.
Now, of course, Trump has changed his tune from lawsuits to stop the count, to wanting to keep the count going, hoping that that small number of provisional votes will bring a win - hilarious!
That's fine, keep going - no one but Trump himself has ever asked to stop the count - in fact, never stop the count.
However, remember that in 2016, in the end, there were 4 million more popular votes nationwide for Hillary, and even that did not change the electoral college call for Trump - but it's likely Biden won the popular as well.
Lastly, I'd like to thank all the brave poll workers of both parties, who worked tirelessly into all hours of the night, despite being falsely accused, screamed at, chanted at, and even threatened with violence.
THANK YOU, poll workers of both parties, for what you had to endure, this election!!!
In fact, I'm not sure Trumpers realize that poll workers are from both parties - thus, accusing even Trump-supporting poll workers of fraud isn't exactly helping your case!
For more on what poll workers of both parties had to endure, this election, read this story on a poll worker who was videoed throwing away a piece of paper while counting, which went viral, falsely claiming this was a vote, and has received death threats and went into hiding.
In fact, when investigated, it was discovered what he actually threw away were the instructions that came with your mail-in ballot, which were not supposed to be mailed back with the ballot - and he was following protocol.
Otherwise, I get your disappointment, and it sucks, I know -  we felt it in 2016 - only with less triple-checking, investigations, and ridiculous lawsuits lol.
However, the problem is really rooted in the electoral college and what they use to determine to make the call  - although it does appear that unlike in 2016, Biden actually won the popular vote, too.
Since none of us like the electoral college unless our candidate wins - shouldn't we change it?
I'm sorry you don't like the call, but to borrow Trump's phrase on the coronavirus, but with less nonchalance  - "it is what it is."
_____________________________
P.S. - Former President, George W. Bush, just released a press statement congratulating President-elect Joe Biden, making him the highest-ranking Republican to accept the election results, and thanked him for his patriotic, unifying message, last night, saying though they disagree politically, he trusts Joe Biden as a "good man"  ... 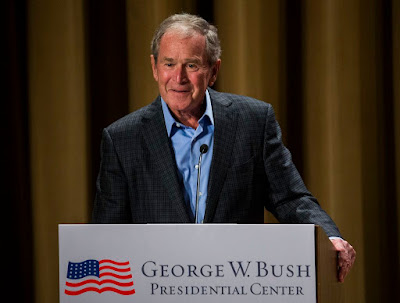 “I extended my warm congratulations and thanked him for the patriotic message he delivered last night ... I also called Kamala Harris to congratulate her on her historic election to the vice presidency. Though we have political differences, I know Joe Biden to be a good man who has won his opportunity to lead and unify our country.”

If you check the link, he says he actually called both Biden and Harris to congratulate them -  but there is no mention of actually calling or speaking to Trump personally.
However, he does go on, in written statement, to congratulate the Trump team for the accomplishment of pulling in a record 71 million American votes and reassuring that their voices will still be heard, going forward.
(Now - what he didn't say, of course, is that this U.S. record of 71 million votes is out of a grand total U.S. record of 168 million votes  - which again, for those who haven't done the math -  is roughly 43% of the total votes nationwide, generously rounded.)
Interestingly, the Senate Majority Leader from my state of Kentucky, Mitch McConnell, has said similar about Biden previously, about not agreeing with him, but trusting him completely and Biden being a "good man."
He has not said that now, though - he hasn't said anything at all, regarding either candidate.
My guess is there's still going to be obstruction and a constitutional crisis from the get-go, in the age of Trump, on everything from cabinet appointments to healthcare, but it's nice to know that if nothing else, Republicans may not agree with him, but they trust him - and there's hope they can make a deal, based on track record?
By Chrysalis at November 08, 2020