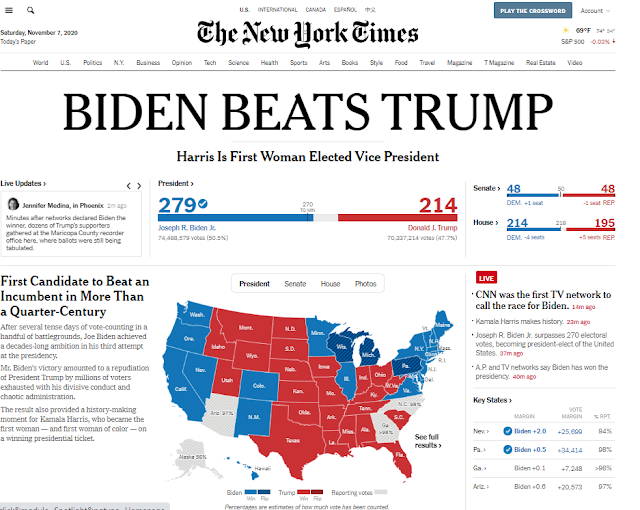 Hallelujah, and thank you, Jesus - and I mean that!

Tears are rolling down my cheeks this election again, as I write this - but this election -  it's because I'm happy, tears of joy!

All the lies, all the cheating, all the unfounded conspiracy theories, failed lawsuits, all the extra "watchers" Trump put in, verified absentee votes during a pandemic, all the recount - and  STILL turned out in Biden's favor!

And Go Kamala - first female VP of the United States!

This has been a very long past four years of lies, cheating, anger, hatred, insanity, dysfunction and darkness are finally over There's finally a light at the end of this tunnel, thank GOD!

I'm not pretending it's going to be easy - Biden's got a long road ahead of him of cleaning up the stinking, rotten refuse and debris left over from Trump's presidency, plus he's in for a fight in the Senate still with the GOP still in charge - but it's a start.

Thank, you, America - I can honestly say I'm finally proud of you again - I love you! 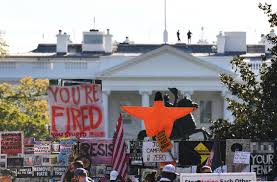 Earlier this week, I played a little music from my husband's home city after Stevie Wonder and Obama showed up to rally for Biden in Detroit - and part of my tears are in happiness for Detroit because they voted in record numbers, their voices and votes are no longer suppressed and America heard them!

Martha and the Vandellas - "Dancing in the Street"

All we need is music, sweet music
There'll be music everywhere
There'll be swinging, swaying, and records playing
Dancing in the street