(PS added)
We all could use a laugh, right now, methinks.
Thus, in case you haven't seen it, this was Trump's tweet a few hours ago, falsely claiming victory in Michigan (though the electoral college officially claimed Biden the winner in Michigan), as well as that he had a "big" lead in Pennsylvania, Georgia, and North Carolina,  in which he actually has a 3% lead at most (but will likely win those other 3 states, yes).
Twitter flagged this as dysinformation, of course, along with 2 more of his false tweets today ...

Dohkay.
Well, as long as we're apparently suffering from delusions of grandeur, and 'hereby" proclaiming things, with neither the evidence nor authority to do so  ...

"I hereby claim that I am 29 years old forever, and that I have just been canonized as a saint by the Catholic Church ... despite not being Catholic."
"Also, I hereby claim that from this day forward, that because Donald J. Trump sits on a throne of lies, he shall no longer be referred to as President by anyone in the entire universe; instead, he shall henceforth and hitherto only be referred to as the 'Greatest' Delusional and Deranged Douchebag 'of all time/in American History.'"

Others apparently had the same idea ... hehehe 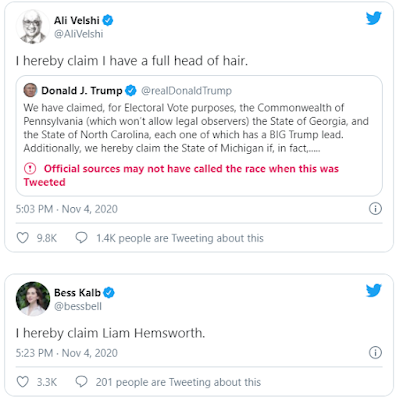 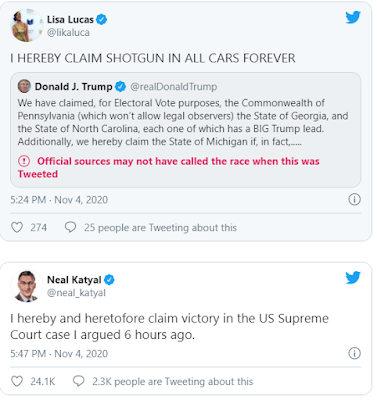 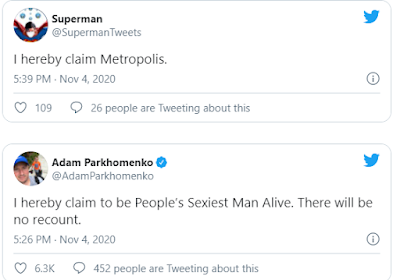 PS - As I explained 2 posts below, showing the electoral college math, if we stopped the counts now, and called it based on current count status, then Biden would win by electoral votes anyway, so it would be in Trump's best interest to let the count finish.
In fact, I jokingly said, "Okay, I'm good with that, then Biden wins" lol.


I was joking, of course - because why would we encourage people to get out and vote, but then not count their votes, when things don't go our way?

Would you want your vote not to be counted?

This is the democratic electoral process during a pandemic - it is what it is, and it takes as long as it takes.


If you want a recount when the counts are complete, that's perfectly fine, reasonable, and understandable, considering the difficulties and contentiousness of this election - but IMO, trying to stop the count altogether is yet another attempt by a wannabe dictator to undermine the electoral process.
By Chrysalis at November 04, 2020