No, Nobody Wants to Tear Down Statues of Jesus ...

Trump said yesterday that BLM protesters are "looking to tear down statues of Jesus Christ," - which is, of course, complete BS.

Nothing to see, here, just another blatant propaganda lie to motivate you to hate the left and black people lol.

Many Democrats and/or black people are actually devout Christians, of course, but Trump would have you believe otherwise to manipulate you to hate and fear black people and Dems.

The BLM protesters have torn down non-union, confederate statues as symbols of slavery and racial hatred; this week, slave-owning presidents - particularly Andrew Jackson (who was a real douche in general) - period.

The one exception is one particular statue of Lincoln, which depicts a freed slave beneath him, whom he appears to be petting, like a dog ... 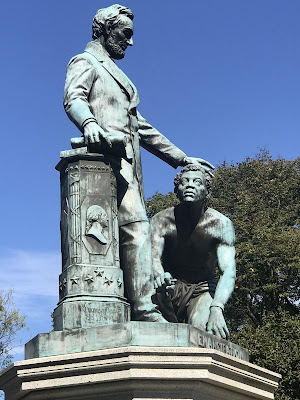 ... I, too, have found this statue in Washington D.C. disturbing, because despite freeing the slaves, it still reeks of white supremacy.

US. Representative Eleanor Holmes has introduced a bill to have it removed to a museum rather than torn down.