"Fiat Justitia Ruat Caelum" is Latin for "Let Justice Be Done, Though the Heavens May Fall"

On May 27th -  as news traveled fast and the world learned of George Floyd's murder and the nation began to protest, what does Jerry Falwell, Jr.  - evangelical Director of Liberty University (in a town called Lynchburg, Virginia, mind you), son and heir of Jerry Falwell's evangelical empire - decide to do? 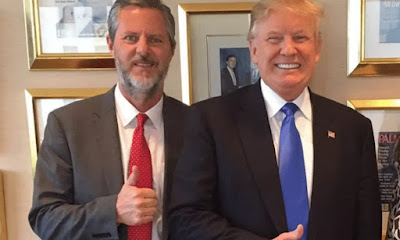 Does he lead in prayer for for George Floyd's family?

Does he lead in a prayer for fair justice for people of color?

Does he lead a prayer for equal protection and prosecution under the law, regardless of skin color, and to end oppression and power abuse over the poor and powerless?

Does he lead in prayer for general social unrest?

Does he lead in prayer for mutual understanding and more unity?

Does he even lead a prayer for cops?

Nay, not even that.


"I was adamantly opposed to the mandate from @GovernorVA requiring citizens to wear face masks until I decided to design my own.  If I am ordered to wear a mask, I will reluctantly comply, but only if this picture of Governor Blackface himself is on it!”

That's so off-the-chain insane and horrific for a Christian leader to actually promote -  I can't even fathom it.

Now - to be fair - that picture surfaced 2 years ago, and it is legitimately from Virginia's (Democrat) Governor Northam's Medical School yearbook, under his personal page, and it is unclear which, if either, of the two men is Governor Northam.

However - completely ignoring George Floyd and the social unrest, using the situation it to still focus on not getting your way with social restrictions - then actually encouraging people to only wear masks if they have that picture with blackface and Ku Klux Klan on them  -  is completely insensitive and re-traumatizing to the black community!

As the President and Director of a self-purported Christian and Christ-focused/bible-focused university, your job is to spiritually and morally lead, pray, and comfort your flock during crisis as Christ did  - not politically distract and add fuel to the fire by promoting that people wear horrific institutionalized racist images from our past as the only plausible excuse for wearing a COVID mask?!?

In fact, he admitted in his apology that it didn't even occur to him that resurfacing that picture and wearing it around might be insensitive and retraumatizing for the black community, especially right now  - he just wanted to damage a political opponent.

This is what I'm talking about people, even with my post below - how we white people, right and left, often ... just don't get it.

We vainly imagine ourselves "helping," but we actually could end end up further proving our ignorance and insensitivity and making things worse - and further, it becomes glaringly apparent, in certain cases, the real intent of doing so is political control.

If you're not racist,  and it's just that you're ignorant about other races, that's okay - we're not born black and raised in the black community, so there's no way to know before we know.

HOWEVER - the cure for ignorance is education - through both formal and up-close-and-personal experience.

Therefore, ask more questions, listen more than you talk - educate yourself before you speak and make things worse?!?

With things like this, though - you would think you wouldn't even have to ask  - all it would take is for you to put yourself in another human being's shoes, for a moment - considering their history and how viewing images like that might feel?

It's called empathy for other human beings - look into it?

HOWEVER AGAIN - ya gotta admit, at this point - Trump Republicans are the worst at being racially clueless.

Most of them either live in rural communities or white suburbia, where there are no people of color, so they don't even know a single person of color on a more personal level.  People are terrified of

So  the only experience they even have with people of color - often even Democrats - are the worst-case scenarios the news presents (if the info isn't twisted/dysinformation propaganda already).

In fact, there's a reason why the KKK and the American Nazi Party endorsed Trump - and it's not a good one.

Though they have supported only Republicans since 1964 (Civil Rights Act),  in recent years, they have often abstained from endorsing either of the 2 candidates that our main parties chose.

However, in 2016, they no longer abstained from endorsing either main party's candidates and unequivocally chose Trump -  who openly welcomed donations and support from the KKK and the American Nazi Party.

As for Falwell Jr., dozens of his staff stepped down, half the students were in an uproar - and so after that apology, he stepped down.

However, before his resignation, 36 members of Liberty University staff wrote the following in an open letter to Falwell Jr. ...


“It has become obvious to many that your heart is in politics more than Christian academia or ministry, so we would encourage you to leave the position of school president and pursue politics full time,” said an open letter signed by 36 prominent African-American alumni, including several National Football League players. “Your statements hurt the ability of Liberty alumni to obtain jobs and have a voice in the culture. Having the school’s name on a résumé can be a liability to many of our graduates.”


America should've realized this already several years ago - but this is further proof of it that the rest of us already knew - that  Trump-style Republicans have stamped Christ's name on things they just want done themselves for power, staking their sole claim on Christianity, demanding everyone support their interpretation of scripture, their politics, and Trump (or you're a CINO or unAmerican if you don't).

We say "Good Riddens" in the South, as opposed to "Good Riddance" - which is why "riddens" passes Word's spellchecker ;)

Thus, if you hear or read where someone use the colloquialism "riddens" instead of "riddance," even if formally educated?

You'll know right away that it's not that they're not stupid or uneducated - it means they're using a colloquialism that gives away they are either truly originally from the South, lived in the South for quite some time, or their parents and family have deep roots in the South :)

(As for me, I'm sort of a mix - I personally lived in the Cincinnati suburbs, growing up, but both my parents and their families are from Central and Eastern Kentucky, I spent every summer here in Kentucky, and I have lived here full time since 1987 (with the exception of 3 years in Pensacola, FL) - that's 33 years. I find the longer I live here, the more Southern-sounding, like my family, I've become.  But then I've even caught my Detroit husband using a few phrases, after living here for 10 years ;)

If they don't use Southern colloquialisms at all?

Well, it could be education and/or trying to speak English correctly - but even many of us who've been formally educated, even if educated in the North, often still use colloquialisms and vernacular from the culture in which we were raised.

Despite formal education, we sometimes still use "improper" English colloquialisms in the South, partially because it's ingrained in us, but also partially motivated by not wanting turn our backs on where we came from/paying homage to the more honorable. moral, and ethical members of our families  -  and sometimes, it's just so the culture in which we were raised can still understand us lol :)

However, as a public service announcement - never using Southern colloquialisms at all - and especially if they are used incorrectly?

Well, that can and should raise suspicion of false claims of having Southern identity and/or at least deep Southern family roots  ;)

Regardless, I hope Franklin Graham is right after Falwell Jr.

Because if Billy Graham could see what his son had done to his ministry, he'd roll over in his grave, jump out, and snatch him bald-headed!

(That's upper/middle/working/poorer class Southern colloquialism-used-correctly Lesson #2, mind you - most often used by the poor white community and the poor black community, however :)

Don't let the door of the church hit your sorry false-prophet/wolves-in-sheep clothing butts on the way out or anything!

Falwell's stepping down on the eve of George Floyd's burial is not only appropriate, but hopefully yet another sign of the beginning of the end to systemic, institutionalized racism and power abuse. 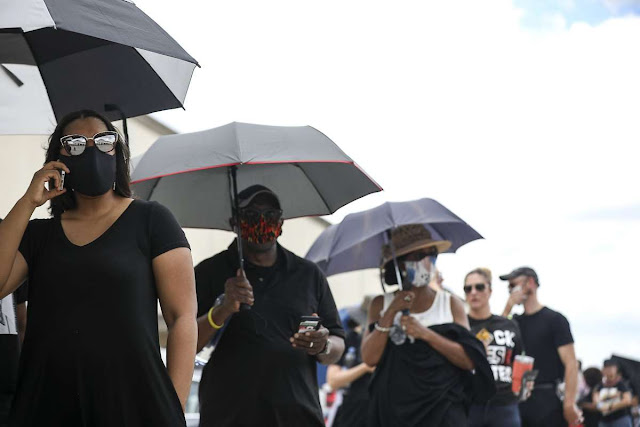