The dismantling was completed yesterday afternoon.

(I said dismantled from its base -  NOT destroyed.  It is unclear where he will go, likely a private museum.) 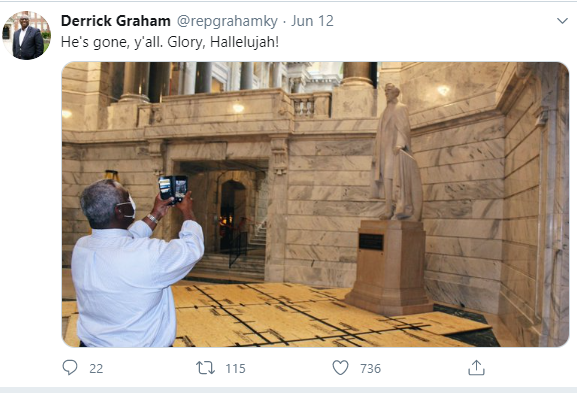 Video of the dismantling ...


Many of us, in this state, have been trying to get it down for years.

Yes, it's history and heritage - but not one we're proud of - or at least we shouldn't be proud of, we should be ashamed.

Thus, some "history" belongs in private museums owned by Confederacy-loving/KKK/white-supremacy and other amoral freaks with halls of shame -  not presiding over the grand hallway rotunda of the the state capitol, which our taxpayer money supports -  where children on school tours - and all people - should feel welcome,  not reminded and retraumatized by parts of our state and nation's more shameful past.

For those unaware, our State of Kentucky was officially Union - but you could choose which side you fought for.

And let us not forget, it is Jefferson Davis who uttered the words: "African slavery, as it exists in the United States, is a moral, a social and a political blessing" - as if God himself blessed the idea of slavery.

Pro-slavery Southerners often twisted verses of scripture to pro-Slavery, despite the big-picture idea from the bible that the subjugation into slavery via conquest, and the oppression into poverty of people via physical and economic means - including the Jews by Egyptians in the OT and the Romans in the NT - was clearly depicted as evil.

Let us also not forget that rather than face the music - the consequences of his actions - when the Union Army came to arrest him to stand trial for treason and other war crimes ...

... President of the Confederacy, Jefferson Davis ... ran away in his wife's coat and shawl ... 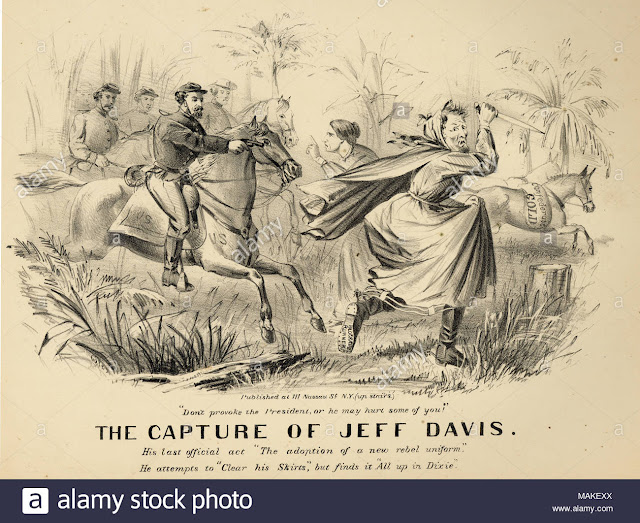 Not because he was transgendered, mind you -  but to disguise himself and evade capture - because in the end, Jefferson Davis was a coward.

Though the press had a field day in imaginative comics over the event, -this isn't propaganda, it's historical fact - verified by his wife and house slave, who claimed it was at their urging.

Jefferson Davis wasn't wearing a dress, but he really was wearing his wife's coat and shawl when captured - which he claimed was a "mistake during his hurry."


Is that a bit like hiding in a bunker below the White House while the people protest and riot, outside, as consequence of fear-and-hate-filled propaganda, words and deeds, having fueled the fire?  ;)

That's a common thing for bullies with big mouths -   all big and bad behind microphones, phone screens, and computers and henchmen - ordering or manipulating letting them do the actual dirty work, then throwing them under the bus later, claiming they had nothing to do with it  - they're all cowards, in the end.


Jefferson Davis was imprisoned for 2 years, but later pardoned by Confederate sympathizer, Andrew Johnson, who had assumed the presidency after Lincoln was shot (and who was later the first U.S. president to be impeached) - so he never stood trial.

Additionally, Pope Pius IX sent him a a portrait, with the inscription, "Venite ad me omnes qui laboratis, et ego reficiam vos, dicit Dominus", which correspond to Matthew 11:28 "Come to me, all you that labor, and are burdened, and I will refresh you, sayeth the Lord". A hand woven crown of thorns later accompanied the portrait, which many say the Pope also made, but may have actually been made by Davis' 2nd wife.

(Like I said, despite Christ and Moses both denouncing oppression and slavery, other verses n the bible - particularly the words of Timothy and Paul - have been twisted to mean slavery was acceptable/blessed by God.)

Regardless, Jefferson Davis still presided over the Kentucky State Capitol until June 13, 2020.

And may I just say that for years, there was a college bar called "JDI's (Jefferson Davis Inn) stood for years, on High Street, right next to his former law office - which was coincidentally where one of the cruelest things was ever said to me in my life (that I won't share here).

So I won't be shedding any tears  - in fact, I'm overjoyed, for multiple reasons! :)

Glory, Glory Hallelujah and Hosanna in the Highest!

Mine eyes have seen the glory of the coming of the Lord
He is trampling out the vintage where the grapes of wrath are stored
He hath loosed the fateful lightning of His terrible swift sword
His truth is marching on!