I understand fears of the government, I do - but it really depends on the administration in charge.

Therefore, I am confused by a political side whose entire premise foundation is supposedly built upon wanting small government, but then calls state and local government emergency health public mandates regarding social distancing and wearing masks, "socialism"...

Do you have any idea how "un-American" and communist that is, self-purported "Patriots?"

No, I'm sorry - because according to the U.S. Constitution , we still have due process of law, in this country - - which says you cannot detain and arrest people without probable cause, and you must inform them of why they are being detained and of their rights, including the right to an attorney, and put them through due process of law - none of which are being done by the federal agents (DHS and U.S. Marshalls) involved.

If you're the sort that's afraid of the government more than you are the corporate businesses who line their pockets, and a true anti-communist conservative, then you would think what's going on in Portland would be what actually scares the B'Jesus out of you -  not state and local masks mandates and social-distancing restrictions - so again, I am confused as to why it doesn't?

Is it ME that's confused, or are you, "Patriots?"

Thus, I am praying for Portland that this can be peacefully resolved, but I fear the way US marshals and DHS agents are handling it is only escalating the violence. 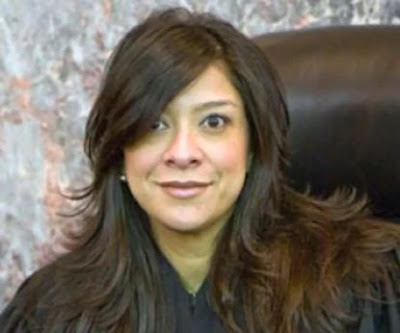 In other news, a federal judge's son was just murdered, and her husband was gravely injured, when a man dressed as a FedEx driver opened fire, when her son answered the door for an faux delivery.

Salas is considered a liberal judge, recommended into office by high-profile Democrats, appointed as a federal judge by then-President Barack Obama.

Salas has ruled decisions on organized crime and gang-related crime, and most recently was assigned to a case regarding securities fraud by Deutsche Bank.

***Thus,  at the time this post was written, it is unclear whether the murder of her son/attempted murder of her husband were retaliation for her past rulings, or an attempt to prevent her future rulings***

However, feel free to Google "Deutsche Bank" for yourselves, choosing the news publication you trust, to see why so many people on both political sides are speculating about possible connections/motives associated with the Deutsche Bank case that was on her docket 4 days from now ...

Deutsche Bank is a private bank in Germany, notoriously associated with assisting with tax evasion and money laundering.

You will find, regardless of publication, that Donald Trump and Jeffrey Epstein are both proven clients of Deutsche bank (verified by pending lawsuits).

The current legal question on the legal table, however, is regarding  whether they were not just clients, but actual investors in Deutsche Bank.

And that is what is essentially at the center of the current legal proceedings regarding Trump's tax returns/financial status, as well as Jeffrey Epstein's true financial assets and estate - trying to wrangle and court-order those records from Deutsche Bank, an international private bank, but have thus far been unsuccessful.


You will also find that Barack Obama and Joe Biden are/were neither clients of, nor investors in, Deutsche Bank.

It is unclear if the Clintons are/were ever clients or investors of Deutsche Bank.

HOWEVER, Deutsche Bank did fund Hillary Clinton's "closed" speeches to private banks during her campaign.


Most recently, as mentioned above, Deutsche Bank has made headlines for being involved in legal proceedings regarding both Jeffrey Epstein's estate, as well as the SCOTUS decisions on Trump's tax information/financial holdings public - including the SCOTUS punting part of that decision to lower courts - which would be federal court.

Now, here's where it gets complex and I think where people are getting confused regarding Deutsch Bank and Epstein, which is understandable.

Despite articles stating as a fact that Salas was presiding over "the Epstein case," they're actually confusing 3 separate cases - Epstein's criminal case VS. Epstein's true financial assets/estate case VS. the Deutsche Bank Securities Fraud case.

Salas was to preside only over the latter, this week - the Deutsche Bank Securities Fraud case - as far as we know.

***HOWEVER  ***  the security-fraud case that Salas was to preside over would likely affect all the other cases -  to include Epstein's estate, as well as Trump's tax return/financial holdings - and thus why so many people are jumping to the conclusion that the murder is related to Deutsch Banks.

Because it is possible - even likely - that Epstein WAS an investor in Deutsche Bank, as well as being an investor in the U.S. security-trading fraud situation - but that must first be proven in court.

Even if he was a general investor, it must be next proven that Epstein was also specifically invested in that particular U.S. securities-fraud case that Salas was to preside over, and then at the center of this case is why, in addition to breaking SEC trading law, was this information about Epstein not revealed to the other investors.

Deutsche Bank is a private international bank; therefore, they do not have to comply with U.S. banking laws and regulations when it comes to private holdings and investments - nor are they included in taxable U.S. income - EXCEPT when it comes to securities trading in the U.S.

Thus, all of this speculation you're reading in the press is predicated on the assumption - some might even say the likelihood - that the entire motive for the securities-fraud case was a method to legally glean all of the financial holdings and investor information about Epstein from Deustche Bank, via a legitimate securities fraud case route.

This ruling would then also open the door for Trump's financial holdings/taxable income.

Because using this route, at some point, Deutsche Bank would legally have to reveal ALL of their investors - not only to each other, but publicly - to be in compliance with U.S. federal securities trading laws.

Now are we getting a clearer picture?

*** However - though the timing IS curious, remember - all of this stuff we're reading in the press is still only motive speculation and circumstantial evidence  -  we have proof of nothing, yet.***

And as long as everyone's jumping on the Deutsche Bank motive-for-murder conclusion -  rather than retaliation for Salas's prior rulings, which is also high likely - don't forget,  that would make any investor in the Deutsch Bank securities fraud situation have a motive - not just Epstein.

Then again, it could be totally unrelated and retaliation for something Salas already ruled on years ago, for all we know.

All we know for fact is the current Deutsche Bank case that Judge Salas was assigned to was, and at least on the surface, appears to unrelated to any of the people above, just Deutsche Bank and some of its (at present, unknown) investors.

Having said that - while I think suspending our judgment until there's evidence is always a good idea - I also think America has a problem with confusing "suspending judgment until all the facts are in" with "turning a blind eye to facts that don't support our own narrative bias."

Meaning we often ignore facts, evidence, and possible motives, because of subjective bias - because we agree/disagree with their politics or because like them/dislike as a person.


By jumping to conclusions and turning a blind eye to misdeeds - based on our own political and personal biases - we have become our own worst enemy as a country :(