As mentioned in my post about Mark getting the vaccine, after much unnecessary struggle, he's finally getting it this week.

My brother-in-law - the one who is senior finance manager for Universal/NBC Studios in L.A. - just texted back: "(Is it) weird that after I got the first Moderna shot two weeks ago, I hear Dennis Quaid in my head now, or coincidence?  Or is it Bill Gates's nanochip?"

(Of course he was joking, people!)

And for those non-movie buffs who don't get the Dennis Quaid reference, he's referring to the Steven Spielberg science-fiction comedy from 1987, Innerspace, starring Dennis Quaid and Martin Short, in which a military pilot (played by Dennis Quaid) becomes part of a miniaturization experiment, is miniaturized into a microscopic piloted airship, and is supposed to be injected into a rabbit; however, he accidentally gets injected into poor, unsuspecting-goofball grocery-store clerk, Martin Short, instead  lol. 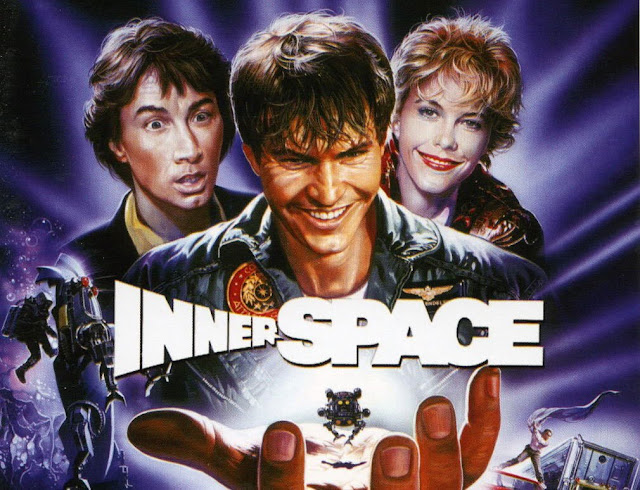 I just texted back how much I loved that movie, plus:  "Dang those shape-shifting lizard-people Illuminati!  Ya know, you should really stop managing their (Hollywood) money.  Ya know, for the New World Order and all."

Of course I was joking, too.

Because let me reassure you (or disappoint you?) -  though there IS a power group in Hollywood that you don't want to piss off, and who can make or break your career and reputation, for sure - there ARE no shape-shifting lizard-people or Satanic Illuminati in Hollywood, trying to control the world, through vaccines or anything else -  and that includes Steven Spielberg and Bill Gates!

(I'm pretty sure my brother-in-law, managing the money for a major film production company and television network, would know.  God only knows what people do privately, but from a business side of things, no - that's total right-wing conspiracy nonsense - and my BIL would never be a part of anything like that, if they were.)

When my husband read the family thread, he added, "So, if you get Dennis Quaid and Bill Gates, who do I get, Rick Moranis from 'Honey I Shrunk the Kids' and Steve Jobs?"

So then he came back and said, "See, Apple autocorrect is already taking over."

I dunno, Quisenberry playing baseball in there would be interesting.

Ya gotta laugh at the absurdity of it all  ...