Aw, this makes me so happy!

Coming to America is one of my top 5 all-time favorite comedies - I know every line, and I still laugh when I watch it, and it still gets quoted by everybody (see, I'm not the only one) - and you can bet your arse the quotes people use are, and never have been, Louie Anderson's jokes!

Great timing, Eddie - we need you back, SO much, right now :)

For those of you who didn't see this interview, Eddie Murphy and Arsenio Hall appeared together on Jimmy Kimmel the night before last.

(It gets funnier as it goes along - and just a forewarning, there's a little bit of "nasty" humor, at the end - but it's freakin' hilarious.  I 'bout fell on the floor, laughing.  The kind of thing that's both shocking and hilarious at the same time.  But hey, that's classic Eddie Murphy - how long did you think he was going to hold off on the potty mouth, during an interview?)

OMG, I was already giggling like an giddy idiot, just during the interview, I was so excited lol.
Four things surprised me:
1)  Oprah didn't know, until a week ago, that it was Eddie Murphy in make-up (courtesy of the legendary Hollywood make-up magician, Rick Baker) playing Saul, the wise-cracking old Jewish guy with the Yiddish accent, in the barber shop. 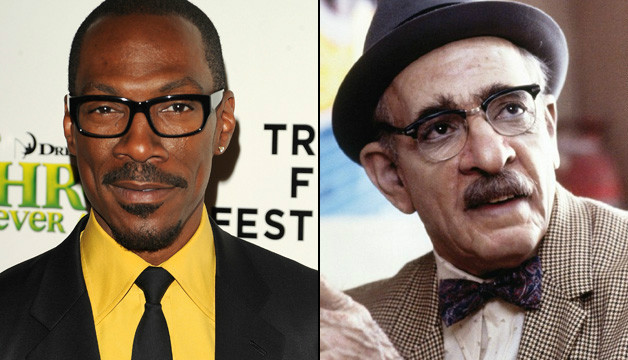 How did Oprah NOT know that?
I thought she knew everything ;)
I thought everybody knew that!
In fact, Eddie says a lot of people didn't know that (including my husband Mark, until he saw this video) - so just in case, yep - that's Eddie, too.  In fact, Eddie and Arsenio played several different characters in make-up in the movie!
2)   Comedian Tracy Morgan was initially supposed to play Eddie's son, but Eddie finally realized Tracy was too close in age to play his son, and put him another role (as an uncle). 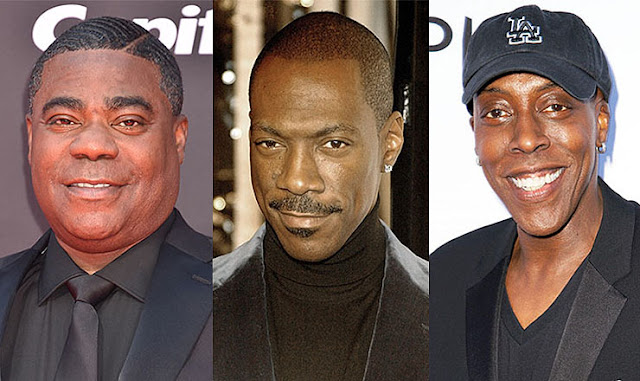 Arsenio said he tried to hint to Eddie that Tracy was too old,  by saying, "Yeah ... Tracy as your son, right, okay.  And maybe when we do Coming to America 3, Morgan Freeman can play your son."
LOL!
3) Arsenio told a story about being on Celebrity Apprentice and Trump, that would later - erm - affect his voting choices, shall we say? ;)
No joke -  in 2012 - which is four years before he ran for president, mind you - Donald Trump got mad at him, because he saw a clip of an interview with Arsenio where he didn't mention Trump's name.

So Trump took a picture of the interview, wrote "No Trump!" on the picture with a sharpie, took a picture of it again with the sharpie comment added, and then emailed it to Arsenio, just to illustrate how mad he was that Arsenio didn't mention him -  and this 4 years before he ran for president!
What the ... even if Arsenio did mention him, talk shows and press edit these clips for time (and other reasons) anyway?
Even this interview was edited/clipped in parts for time, it's obvious - so how was he so sure Trump was never mentioned in Arsenio's interview, back then?
Whatever - but that sounds about par for the course, for the narcissistic, false PR whore and con, who became President based on such shameless false self-promotion.
Jimmy Kimmel's response?

"Well, I wrote the exact same thing with a sharpie on my ballot, last November."

LOLOLOL - Amen!
4)  Paramount literally contractually forced them to stick a white comedian in the movie.
Arsenio was given a list of 3 and he chose which one he wanted to work with (he chose Louie because he loves Louie). 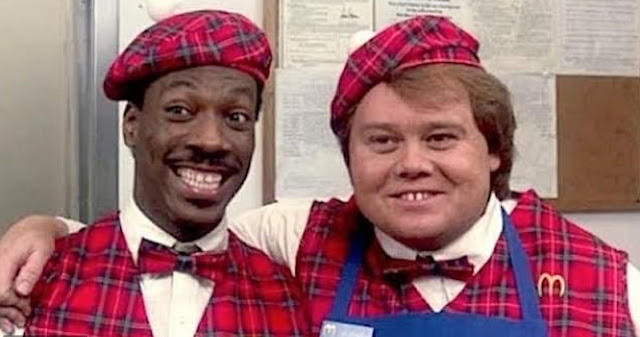 As proof, Arsenio has apparently since stated he still has the list (but he wouldn't say who the other two white comedians on the list they gave him were, during this interview. Wise move lol.)
Geez, I am SO sorry, gentlemen :(
So ... Paramount didn't think the most loved and two funniest comedians in America would be able to carry the film alone without a white comedian to help you? :(
Yeah. I'm pretty sure Paramount was wrong about that ;)

Because it was a blockbuster and considered in the top most beloved comedies of all time - and when I said that people still quote lines and jokes from that movie, no one ever quotes Louie's jokes from that film - sorry ;)
*Don't get me wrong, I love Louie Anderson, too*
However, I did wonder about his character in the film - because his character almost seemed like an afterthought and was completely irrelevant to the storyline.  At the time, I just kinda thought they put him in the movie as a favor to a comedian friend, swear to God, as comedians often do with small or cameo roles in their friends' films.
This movie is beloved by all races, I don't know anyone who doesn't love it, white, black, brown, green, whatever.
Ah, yes  - lest anyone doubt it, racism is alive and well, and always has been, even when we white people thought it was over (except in the South) - including back when Eddie Murphy was the first black man to burst the box office.
Let that be a lesson to us - we, as white people, do NOT get to determine when racism is over - only people of color do.
And for every "whataboutism" argument that white people give, usually based on a "press" story that's been twisted beyond all recognition, like "Well, what about Coca-Cola forcing training on people to act less white?"
First of all, now, you know dang well that Coca Cola never "forced" anybody to do anything, with Pepsi breathing down their neck lol.
Coca Cola asked employees if they'd like to attend a non-mandatory anti-racism/racial-sensitivity presentation, to voluntarily become more aware of their own implicit racial bias.
This voluntary training included instruction on how to listen better to other perspectives, be less presumptive and arrogant, less sure they're right politically, more open and inclusive of new and different ideas, and yes, to be more racially sensitive, and just kindness/empathy training in general.

There were a few complaints that one of the slides in the presentation - again, which was non-mandatory - featured a slide entitled "How to Be Less White" - which one employee put a picture of the supposed slide on LinkedIn - but these complaints were never substantiated, as this slide was never proven to actually exist or be a part of the actual presentation.

Even some of the complainants later admitted they don't remember actually seeing a slide that expressly said that - they just "got that overall impression" - with some even suggesting that the slide posted on Linked In was simply that particular employee, giving their opinion of the overall message of the slide presentation.

When non-complainant white attendees were asked about this, they said things like (paraphrasing):

"If that slide was included in the actual presentation, I honestly don't remember it. Even if it was, I wouldn't have taken it literally and seriously - I would've taken it as tongue-in-cheek, to make fun of ourselves, while still making a point.  I mean, we DID volunteer to be there, to learn how to further shed our own implicit racial bias."

All of this, of course, leaving me with the "overall impression" that if it's true that there never was an actual slide, the complainants just "got that overall impression" - then whose fault is it that they saw themselves in general instruction not to be arrogant, assume they're right, and non-inclusive of other races as stereotypical white people?
Well, perhaps they shouldn't voluntarily look in mirrors then, if they don't want to see themselves as other people see them - the rest of us are open to the idea that we need more work in the implicit-bias department and may need self-improvement:)
(Btw, since then, a video has been passed around Facebook with cans that say "Try to Be Less White" as an apparent ad for Coca Cola  - but the video was not produced by Coca Cola, and there are no such cans in existence; thus, the video ad and still shot have been deemed to be fake.)
Secondly, even IF that story were 100% true the way the alt-right told it - which it's not - then your next action should be simply talking to one single, unafraid black man about his lifelong experiences with racism.  He'll give you at least 10 stories of literally being "forced" to cater to white people, as a black man, just based on his own personal experience alone.
Case in point - Eddie Murphy and Arsenio Hall being contractually forced to include a white comedian in their movie, when writing and filming this movie - despite Eddie being the biggest box-office draw in the 80s to mid-90s!
Then, perhaps your very next step might be to read more about the logical fallacy that is "Whataboutism" before you give another weak-ass, centuries-old "what about?" white-man argument as deflection of the issue? Regardless, this coming Friday, y'all -  "Give it up Randy Watson and his band, Sexual Chocolate" ... coming to you once again from your local church-basement fundraiser! ;) 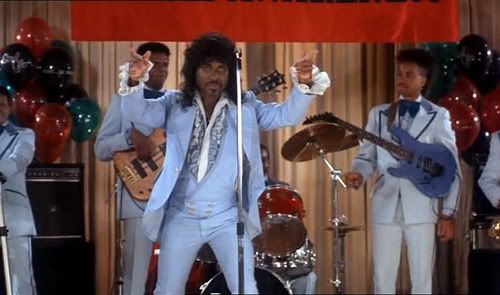